CNN Liberals Turn On Each Other Over Plastic Straws: 'You're in Alignment With the President!' 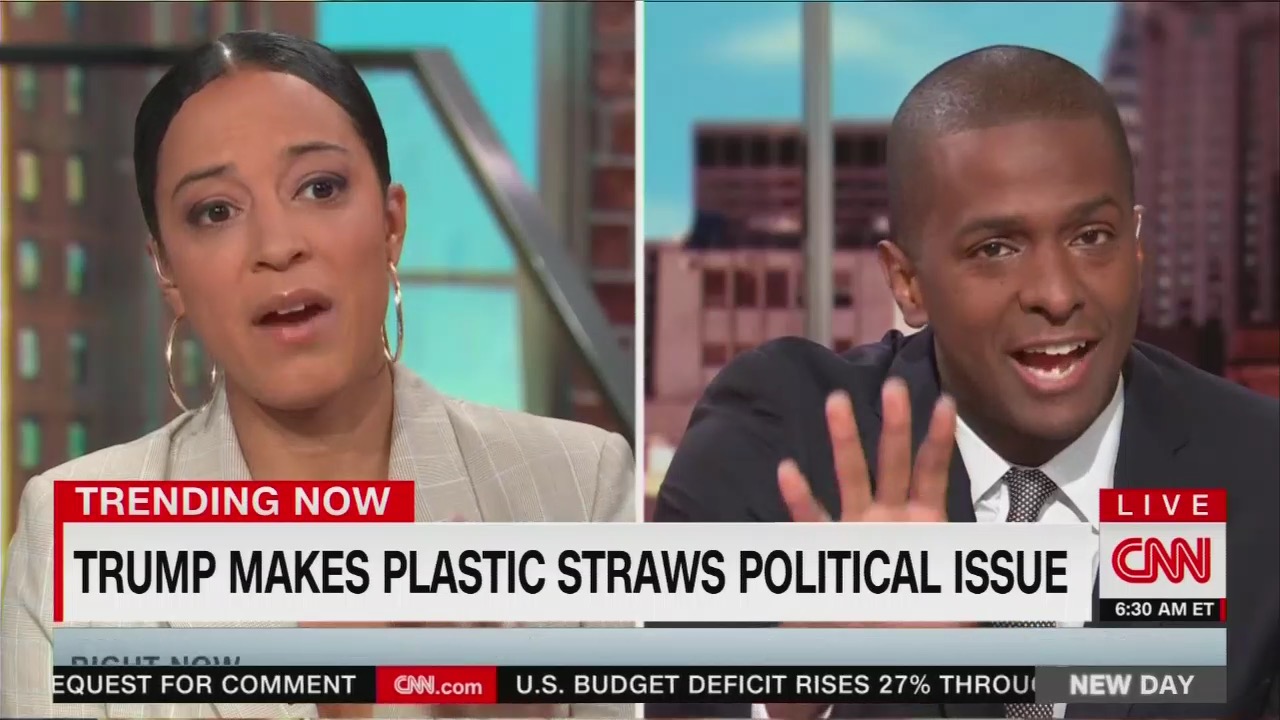 On CNN New Day Tuesday morning, the self-described “CNN squad” consisting of Trump-haters April Ryan, Bakari Sellers, Angela Rye and Andrew Gillum took a break from bashing the President on immigration laws, to complain about plastic straws. Seizing on the Trump 2020 campaign selling plastic straws in defiance of the left’s determination to ban them, the panelists began to turn on each other as some admitted they don’t like the allegedly more eco-friendly alternatives.

Co-host John Berman brought up the topic, noting the Washington Post had written about the Trump campaign seizing on the cultural issue of plastic straw bans, asking the panel if they liked paper or plastic straws. While April Ryan and Angela Rye gave the politically correct answer saying they liked paper, “biodegradable” straws, Bakari Sellers said quietly,“can’t stand mine.”

Failed Florida gubernatorial candidate and former Mayor of Tallahassee, Andrew Gillum realized the absurdity of the conversation and began joking about this being a “first world conversation.” That irked Rye who asked, “Are you calling me an elitist?” She then turned the focus back on Sellers for admitting he doesn’t like paper straws.

“I think you’re in alignment with the President. Go for it. I can't wait, ” she said, trying to shame Sellers.

The CNN analyst admitted, “I am. I mean, I just don't like paper straws! That's my preference.”

Rye teased, “Tweet him!Tweet him!” adding, “Everybody get Bakari!”

Sellers tried to defend himself as a good liberal. “I recycle just for everybody watching,” he said, finally conceding he would try to move to more “biodegradable” straws.

But having a preference is not allowed on CNN. To Sellers, Ryan preached it was everyone’s moral duty to shuck plastic straws to save the planet:

At the end of the day, we have holes in our ozone. At the end of the day, we are seeing more severe storms. And what's happening in the Antarctica, the icecaps are the bottom line is, you know, when we go to the beaches. I was just at the beach last week, my children were like, no, we can not leave our plastic bottles on the beach, we have got to take care of our planet, and I don't care if it's Democrat or Republican, I'm not going to use a plastic straw. I use a paper straw or metal straw. Or bamboo.

After Gillum joked again about the silliness of the topic of conversation, Rye and Ryan turned on him too, because the left’s hysteria on the environment is not allowed to be mocked.

“If you run again, you better be careful on this!” Ryan gushed to Gillum while Rye scowled, “You should have brought a red tie. That was a big moment to bring a red tie.”

Rye went back to piling on Sellers calling the liberal Democrat a *gasp* “Republican.”

But Ryan turned the focus back on Trump. Joking about her orange straw, she gushed, “This straw is the precise color of the President’s skin!”