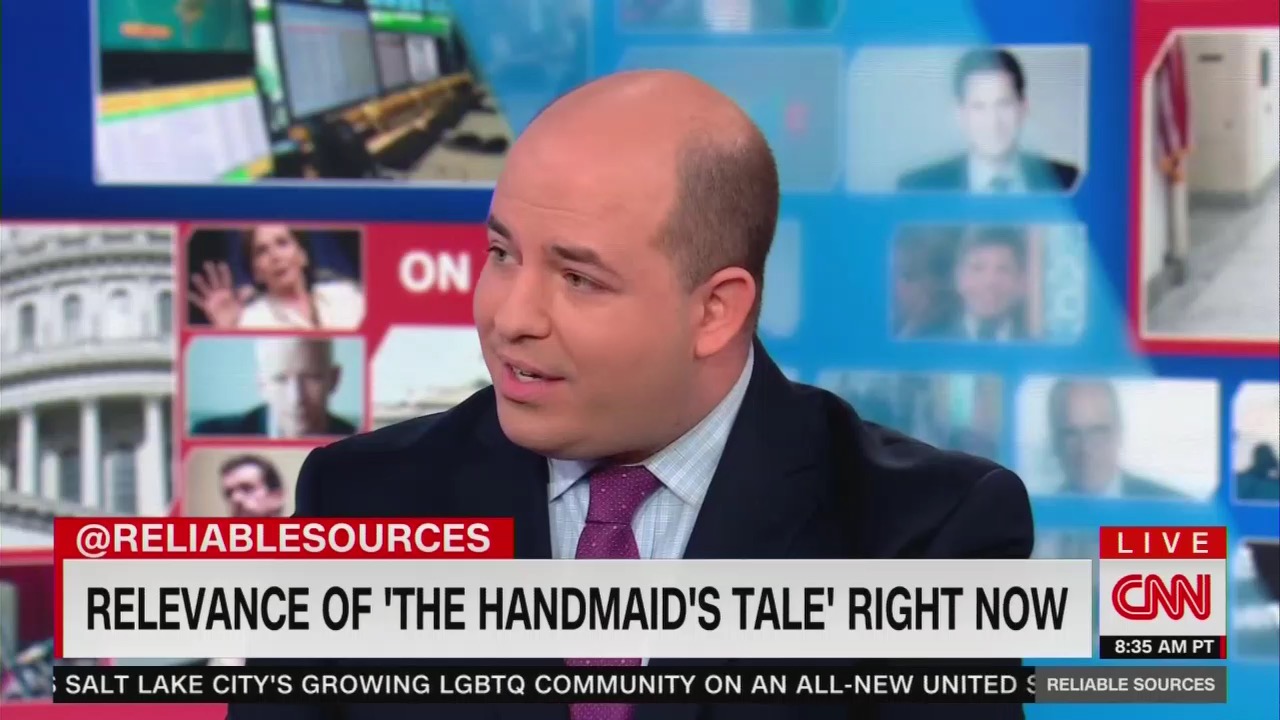 On Sunday’s Reliable Sources, CNN host Brian Stelter welcomed Hollywood liberals from the fictional Hulu show, The Handmaid’s Tale on to fearmonger about how America was turning into their dystopian show. His guests were executive producer Warren Littlefield, and Ann Dowd, who plays a prominent character in the streaming television series.

Stelter offered high praise before letting them speak. “Now of all the TV shows, of all the movies that explore issues involving women's rights, The Handmaid's Tale is number one,” he gushed adding he was a fan. Turning to Dowd, he immediately drew a comparison to the abortion bans in some states, which Dowd bashed as classist and sexist.

Stelter followed up on that by asking Littlefield if he would join many Hollywood studios in banning Georgia from their show’s production...a weird question to ask since the show is shot in Canada, which Stelter even acknowledged.

Littlefield praised other studios who were “standing up” and issuing a “warning” to these states. Stelter loved that, gushing, “Yeah it’s an economic warning to the states!”

The CNN host didn’t point out the hypocrisy of most of these companies having no problem shooting their series or movies in foreign countries that have nationwide abortion bans already.

Instead he asked Dowd how close America was to becoming Gilead: “[E]verybody as they watch Handmaid's Tale thinks about what's happening in this country now. How close or far do you think America really is to the fictional hell-scape of Gilead?”

After Dowd said we were “a heck of a lot closer” than when they started the show, Stelter remarked, “[T]he country has gone that far backwards?” Dowd blamed Trump and the “anti-abortion world” for making Gilead “real.”

Littlefield added that this show was a “really important warning” and that America was on a “very very slippery slope to Gilead right now.”

As if this interview wasn’t nauseating enough, Stelter ended it by literally inviting Dowd to lecture Republican lawmakers over what it means to be “pro-life:”

DOWD: I would say we reconsider your point of view and what pro-life really means. Because what it really means is looking after the hundreds of thousands of children who have no one, they should be at the border protesting the treatment of children and separation of children and family... keep in mind we are all pro-life. We are not -- we are not careless about abortion. It is not something anyone wants. It is sometimes a necessity. And stop treating it as though it's some horrible, brutal assassination or execution as Trump said which was disgraceful...