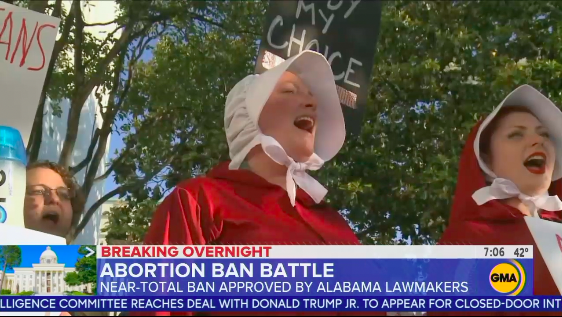 Wednesday morning the big three networks fretted over another comprehensive pro-life bill that was passed in the Alabama Senate last night, that would punish doctors who perform abortions or related activities during any stage of pregnancy for any reason other than saving the life of the mother. The bill’s Republican sponsor hopes to force the Supreme Court to revisit Roe v. Wade. Instead of interviewing pro-life organizations about the bill, all three networks hyped Democrat freak outs and nutty liberal activists dressed up as dystopian novel characters, instead.

“Alabama is ready to outlaw virtually all abortions in an effort to get the Supreme Court to reverse protections for abortion rights nationwide,” CBS This Morning anchor John Dickerson touted. Over at ABC’s Good Morning America, correspondent Steve Osunsami fretted, “Abortion would be criminalized in Alabama, made a felony and the way the law is written it would punish doctors who perform them with up to 99 years in prison.”

All three networks spent the majority of their reports highlighting Democrats upset about the bill. The networks also promoted liberal activists dressed as “handmaids” from the feminist book and Hulu show, The Handmaid’s Tale, protesting after the bill passed in the House. NBC’s Today was the only network to actually sit down with Rep. Terri Collins, who sponsored the bill, to get a quick soundbite.

The networks also played clips of Democrat politicians throwing hissy fits, claiming women were “getting thrown under the bus,” and going to the days of “back alley abortions” by men who could have no say on the matter because “they’ve never been pregnant.” They highlighted another Democrat politician complaining that this “archaic law” was a “shame and a disgrace.”

On Good Morning America, Osunsami also touted the ACLU getting ready to fight this soon-to-be law while on CBS This Morning, correspondent Jericka Duncan worried this bill would “disproportionately” “endanger” minority women who lack access to health care. She also sat down with an abortion activist who ran one of the state’s abortion clinics. Her shirt read, “Everyone loves someone who had an abortion.”

On Today, NBC correspondent Kerry Sanders touted the “backlash” these pro-life bills were facing, pointing out Hollywood production companies and actors who were boycotting Georgia because of their recently passed heartbeat law.

Funny enough, no network showed any video or had interviews with any pro-life leaders or organizations who were happy about the bill.