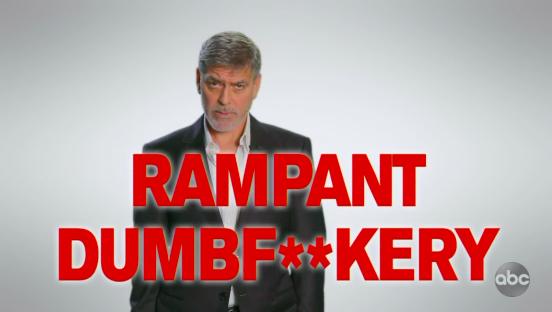 Actor and liberal activist George Clooney appeared on Jimmy Kimmel Live Tuesday night to do a snotty takedown of the Trump administration and anyone who questions the left’s climate change agenda as "dumbf***ing idiots.”

Kimmel began his monologue fretting about a new alarmist climate change report from the United Nations saying that Earth was in the worst shape it's ever been, in human history. The left-wing talk show host sneered that the Trump administration has done “everything they can to do nothing about climate change,” and “just don't listen to scientists.” Not satisfied to just bash those in power, Kimmel went on to mock anyone who had questioned man-made climate change, even warning that these people were dangerous:

A lot of people don't. Not just when it comes to climate change. Scientific fact is suddenly seen as some kind of partisan scare tactic and it endangers ourselves. One major celebrity is spearheading a new initiative to raise awareness of this foray into ignorance and what he has to say is important, so listen.

Kimmel then played a fake public service announcement from liberal actor George Clooney, full of expletives attacking not just climate change skeptics, but also anti-vaxxers and those who belive in Biblical Creationsim as “dumbf***ing idiots:”

CLOONEY: Science has given us unprecedented knowledge of the natural world, from subatomic particles to the majesty of space. Science enables us to cure diseases, to communicate across great distances. Even to fly. Tragically, though, the volumes of invaluable knowledge gathered over centuries are now threatened by an epidemic of dumb [ bleep ]ing idiots saying dumb [ bleep ]ing things.

CLOONEY: Dumb [bleep] is highly contagious, affecting the minds of even the most stable geniuses.

Wow. As a result, fampant [ bleep ] now threatens our health, our security and our planet. Fortunately, there is hope.At United to Defeat Untruthful Misiniformation and Support Science, UDUMASS.

Your generous contribution to UDUMASS will provide desperately needed knowledge to dumb [bleep]ing idiots on Facebook and Twitter, all around the world.

Just $20 will convince one [ bleep ] idiot that climate change is real. $50 will teach five brainless [ [bleep ] to vaccinate their kids. And $200 will convince ten [ bleep ] knuckle draggers that dinosaurs existed but not at the same time as people.

Together we can win the fight against dumbf***ing idiots but we can’t do this alone...Don’t be a [bleep]ing idiot. The world needs your support, you dumb***.