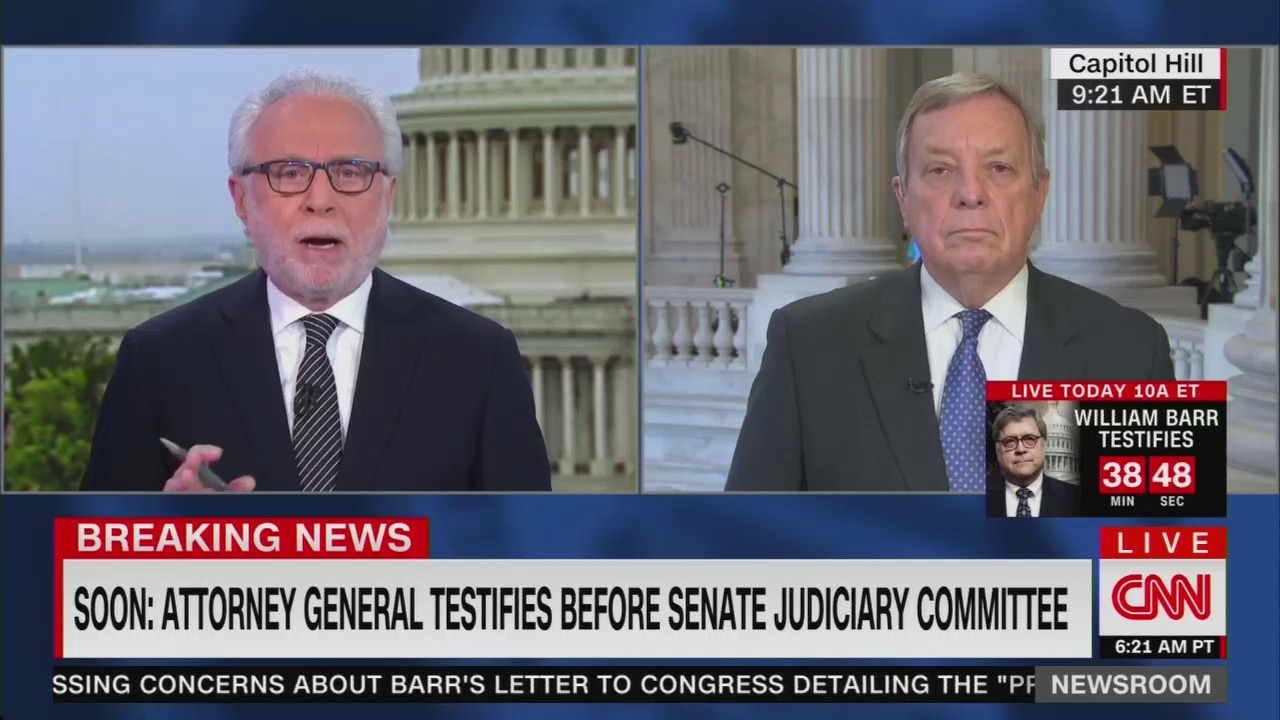 CNN anchor Wolf Blitzer practically begged his Democrat guest to call Attorney General William Barr, a liar, and find a way to force him out disgracefully, during CNN’s live coverage of the AG’s testimony before the Senate, Wednesday morning.

That question was prompted by news that broke overnight, revealing Special Counsel Robert Mueller was not happy with Barr’s summary of his report, writing him a letter saying it didn’t fully capture the context of the report’s conclusions. However, Mueller did admit it was “not an inaccurate or misleading” summary. Regardless, that didn’t matter to the cable networks, who spent all morning hyperventilating that Barr had lied to Congress and the American people.

Shortly before Barr appeared before the Senate Judiciary Committee, Blitzer brought on Democrat whip Dick Durbin to further CNN’s liberal agenda in discrediting the AG. “The stakes have gotten higher,” Blitzer gushed, adding there was a “huge uproar” over the news that Mueller objected to Barr’s summary. “So how will Democrats take this on today during this upcoming hearing?” he asked.

Blitzer described how Barr had told Congress he “didn’t know” if Mueller had “supported” his conclusion in his summary, during his April 10 testimony, after Mueller’s letter had been sent to him. “We now know Mueller stated his concerns to Barr on March 27th, a letter. Did Barr lie to Congress?” he asked.

Durbin didn’t directly answer, asserting that Mueller “made it clear at the beginning that Barr’s conclusions did not reflect the reality of that report" and had "whitewashed" the report. That wasn’t good enough for Blitzer who urged the Democrat again to call Barr a liar who had perjured himself before the Senate:

“So do you believe he lied? Did Barr lie in front of Congress which, of course, would be perjury, that's illegal!” Blitzer eagerly asked.

Durbin showed more caution than the CNN host, supposedly an impartial journalist, showed. “Well, I'm not going to say a crime was committed but he clearly misled [his Democrat colleagues,]” he stated. Blitzer tried one final time, this time acting as the judge and juror for the AG:

“Do you believe he should resign or be impeached?” he urged.

Durbin again didn’t directly answer but said the AG had “virtually disqualified himself” as an impartial actor.