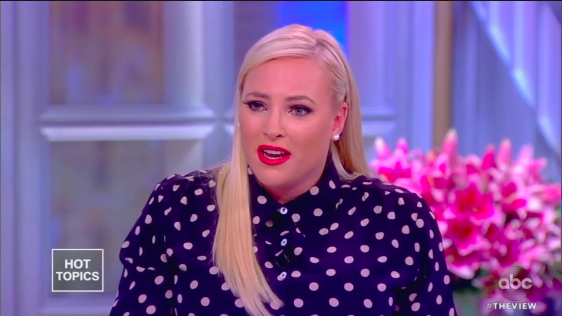 Sunny Hostin tried to defend Kamala Harris giving the same answer during her townhall then backpedaling a bit when pressed. “That's not good enough for me!” McCain slammed, asking her table mates, “Does anyone here think a terrorist should have a right to vote?” That’s when Whoopi jumped in to combat her co-host, staunchly arguing that terrorists have the right to vote:

WHOOPI: Here's what I'm going to say, if they let this terrorist out because he served his time, he gets his -- if he's an American citizen as -- why is your mouth open like that?

MCCAIN: Because, Whoopi, he killed people!

WHOOPI: Yes, lots of people do this!

MCCAIN: He is a terrorist.

WHOOPI: Our Constitution says if you've done your time.

WHOOPI: You have, we hope, been reformed, you've been changed. If they let him out, that means they feel his time is up and he gets to become the American citizen again.

As the two argued, McCain, floored by Whoopi's response, asked her co-hosts again: “Does anybody at this table think anyone who committed an act of terror that killed three Americans and injured 264 deserves the right to vote?” Whoopi took umbrage at the direct question, saying it wasn’t “the right way to ask that question,” before lecturing McCain that terrorists deserved to be rehabilitated:

“Let me remind you why. If you've done your time, that's what prison reform is about. If they let this man out, they are saying he has been reformed, we have -- fixed him,” Whoopi gushed.

A clearly upset McCain kept pleading with her co-hosts who, aside from Huntsman, kept adding their agreement to Whoopi’s take. “You are talking about terrorists!” she gushed adding that he should get the death penalty. As Hostin and Behar began to team up with Whoopi against McCain, Whoopi angrily shut down McCain with, “Don’t do that Meghan!” as they cut to commercial.