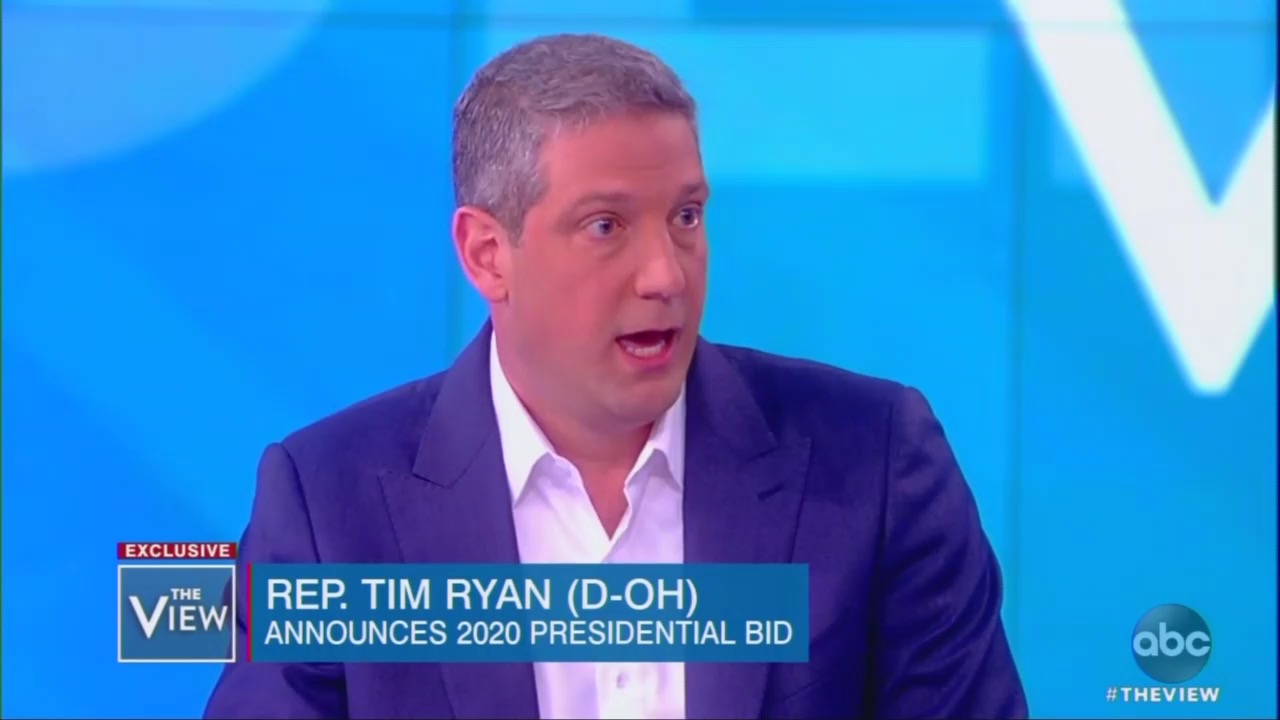 For some reason ABC’s The View has been a favorite stop for Democrats to announce their presidential runs for 2020. That happened again on Thursday’s show, when Rep. Tim Ryan (D-OH) officially announced that he was the Democrat to beat President Trump in the next election.

After announcing his bid, the hosts didn’t press him on why he flip-flopped on important issues like guns and abortion. Instead, they framed their questions as if he was too “moderate” to win over Democrats:

SUNNY HOSTIN: Most people describe you as a centrist, a centrist Democrat. You're a recreational hunter. You were an NRA member. Up until four years ago you were pro-life. How do you win over Progressives within the Democratic party?

MEGHAN MCCAIN: I don’t think your problem is winning over the midwest and places where you’re from. How are you going to win over the Progressive wing of the party who think that the Green New Deal is the most important challenge for Americans right now?

After Ryan explained he was for “free enterprise” but for higher taxes, Behar praised, “You're like Joe Biden a little bit, aren't you?” to her fellow co-hosts agreement.

Later on, co-host Meghan McCain pressed him if his party was going in the wrong direction by putting all their energy into going after President Trump. Citing Democrats trying to subpoena the Mueller report and get Trump’s tax returns, she asked, “Do you think the Democrats are focused on the wrong thing going into 2020?”

Ryan denied that Democrats were on the wrong track. “We need transparency,” he urged. But he added that his party needed to “get back to an economic message” which included raising the minimum wage to “$30 and 40$ an hour,” (what?!):

[I] think as Democrats I'm for the fight for 15. I believe we do need to raise the minimum wage. But we can’t be saying we’re for 15. We need $30 an hour jobs, $40 an hour jobs. We need to get back to that message. And when we talk about the new technologies, that's what those jobs pay. So let’s get busy putting that together.

The audience and hosts loved that suggestion. Joy Behar praised, “I’ve got to say, I’m very impressed with you. Aren’t we all? He’s wonderful! We like you!”

Behar was so awestruck by Ryan that she ended the show with more gushing:

“I thought Tim Ryan was very impressive, did you?” she said, excitedly. Sunny Hostin agreed he was “interesting,” while Abby Huntsman compared him to Joe Biden. “He doesn’t have any baggage, it sounds like!” Behar gushed again, as they wrapped up the show.