Seth Meyers Invites AOC to Attack Fox News, 'Grown Men' Who Are 'Obsessed' With Her 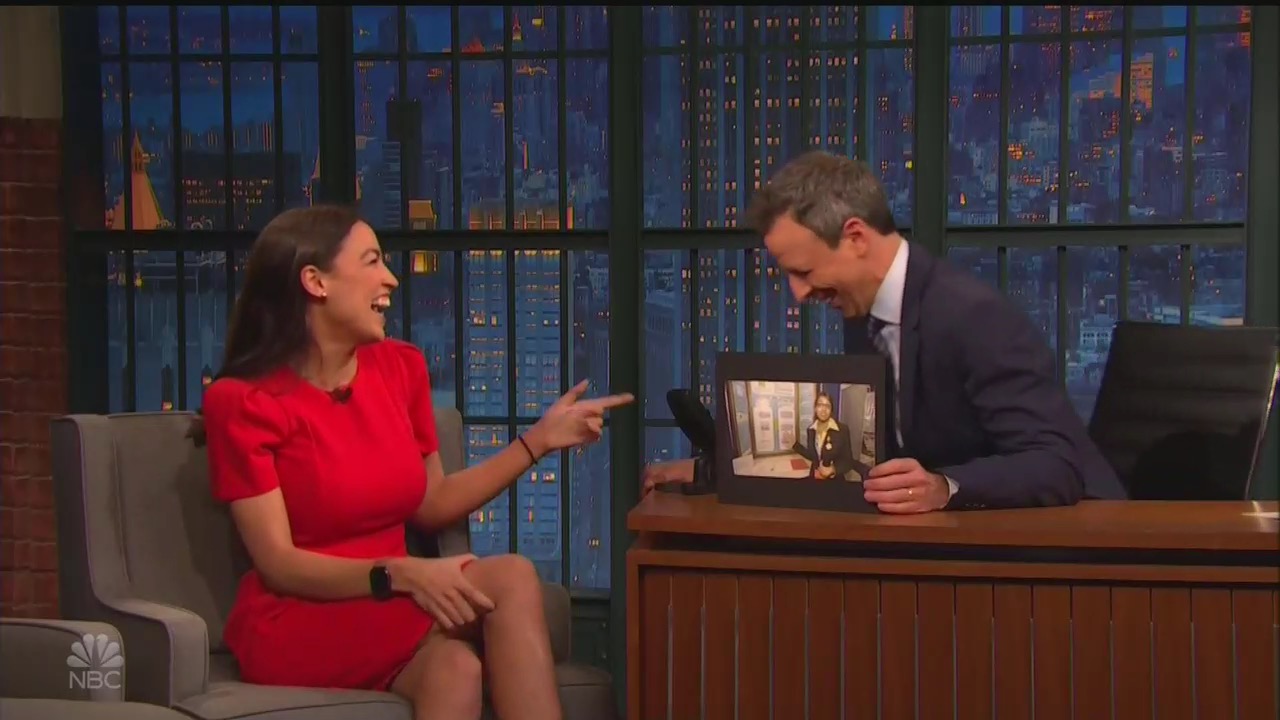 Alexandria Ocasio Cortez was on Late Night With Seth Meyers Thursday night and the whole interview was one big gushfest with Meyers playing the role of the president of the "AOC" fan club. The freshman Democrat congresswoman who is known for her gaffes and bumbling through interviews, didn’t receive any tough questions from Meyers. Instead she was given the fawning, Hollywood celebrity treatment by the host, while being invited to freely tear into her conservative critics.

Right off the bat, Meyers heaped praise on the Democrat, saying he “enjoyed watching her” grill people in congressional hearings. “Why do you think it is that you are good at it and do you think anything you did that was outside of politics has been helpful?” he asked, adoringly.

Ocasio-Cortez bragged about her ability to “cut through the BS” as a former bartender, clearly charming Meyers with a grin and hair flip. He followed up by inviting Ocasio-Cortez to bash her Republicans peers:

“When you're sitting there, are you often taken aback about how bad they are at asking questions?” he gushed.

Ocasio-Cortez laughed along with the host, mocking Republican congressmen who asked her if she was a “capitalist or a socialist,”(even though she opened that can of worms herself by calling herself a “democratic socialist.”) Meyers kept the focus on the radical Democrat's conservative critics, moving on to attack Fox News as "obsessed" with her (uh, has he seen any of her media coverage by liberal outlets?)

One obsession, or I should say, a group of people that seem to have an obsession with you is our friends over at Fox News. They talk about you a lot. Are you surprised with the speed at which they seem to have shifted all their attention and programming to you?

Ocasio- Cortez giggled and gushed, “I mean, it's weird! Like, why are so many grown men just obsessed with this, like, 29-year-old?”(Is 29-years-old not “grown up” to Cortez?) She and Meyers then made a face at the camera to suggest there was something gross as to why so many “grown [conservative] men” were “obsessed” with her.

Meyers didn’t want to stop bashing conservatives, however. He invited the Democrat to take a swipe at both Fox News and her Republican colleagues for believing in “conspiracy theories” surrounding her.

“[Y]our colleagues across the aisle, they also consume a lot of Fox News. Do they then get, you know, bad information about you?” Meyers asked.

Cortez called it “funny” because “actual members of Congress, like, believe” this “lunacy” “and see it uncritically,” she slammed. She shared a story of how a Republican asked her if she had been paid ten million dollars by Netflix. The pair laughed at the audacity of the question, but Cortez didn’t clarify that Netflix had in fact paid ten million dollars to air a documentary about Ocasio-Cortez, so the story wasn’t made up out of thin air.

Meyers also talked about how great the Green Deal was, gushing that he wanted to “give her a chance to clarify” some of the positions that she’s been criticized for.

"One of the things we're even hearing the president say is that you would outlaw cows. Cows farting. That's would be out. Children, hamburgers, ice cream. Any of that true at all?" he asked. Of course, they chuckled as if these were just things, again, made up out of thin air, instead of the very things that Ocasio-Cortez has said herself.

The nauseating interview ended with the NBC host flattering his guest some more, this time on her scientific credentials. Showing a photo of the congresswoman in high school at a science fair, Meyers gushed it was “very unfair” for President Trump to criticize her knowledge about the environment.