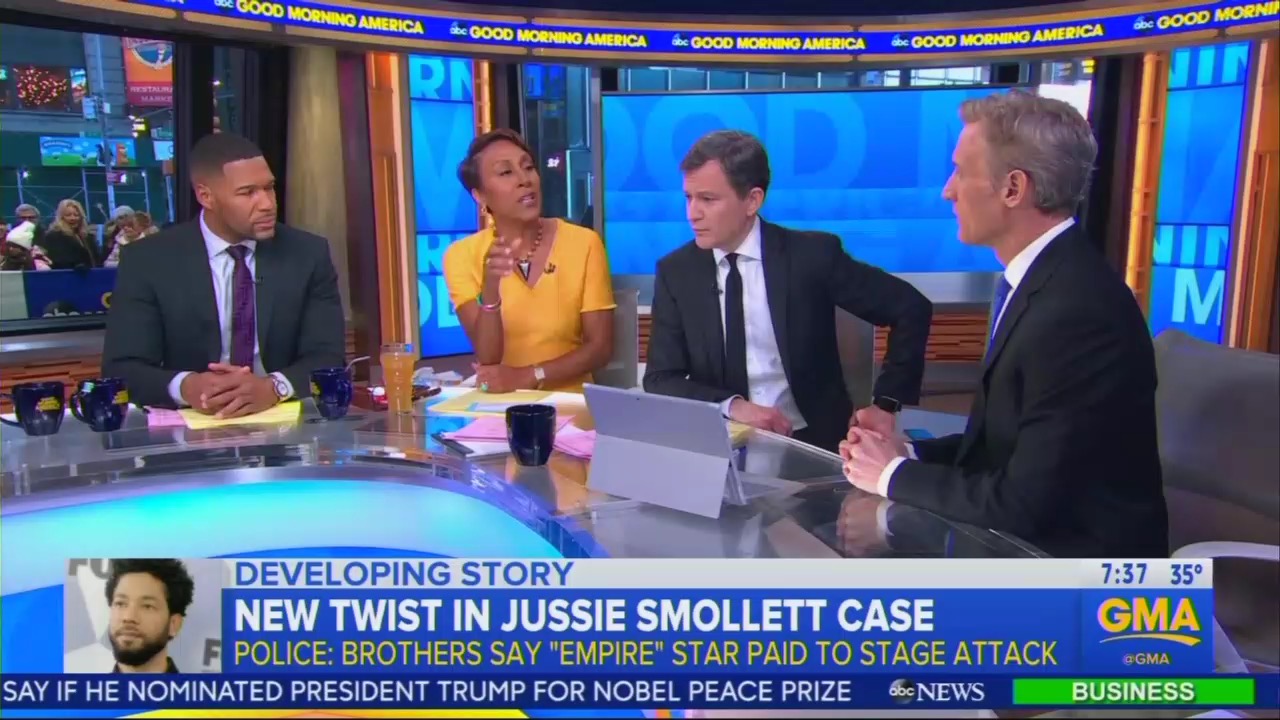 ABC’s Good Morning America team went into full damage control mode Monday, after news broke over the weekend that actor Jussie Smollett had allegedly paid two men to stage his assault. Just last Thursday, anchor Robin Roberts had given the actor a softball interview, even refusing to call his story of a Trump supporter assaulting him, “alleged.”

Leading into the report, Roberts finally did call the quickly unraveling story “alleged:”

"A new twist in the Jussie Smollett case. The actor firing back this morning as the story of his alleged attack faces questions. Police in Chicago say they're working to corroborate allegations that Smollett paid two men to stage the assault," she stated.

In reporter Eva Pilgrim’s report, she tried to save face for ABC, stressing that police had said Smollett was “cooperating fully” with the investigation up until this point. Pilgrim did not mention that the Chicago Police Department also said Smollett would only give partial, redacted phone records to them.

Roberts followed up by defending her interview with the actor, as appropriate given the knowledge they had at the time:

This case is ever evolving. Head-spinning. Changing. When I sat down with Jussie, it was Tuesday night in Chicago. At the time to give his first account publicly give his first account of what he said happened. And we have to remember, at that time, on Tuesday, police officers were saying that his account was consistent. It was credible. And that he was being cooperative. This was all before the interview aired on Thursday and then we found out about the brothers.

Afterwards, the ABC team brought on the network’s legal analyst, Dan Abrams, to help do more damage control, spinning Roberts’ interview as more even-handed than it was by hyping the few times she had gingerly brought up skeptics of his story:

[I] have to say, Robin, even in the interview you did, you were talking about the skeptics. You were talking about the people who questioned his account. So, it's not new this idea that there are questions about what happened. What's new is that the police now seem to be making it clear that they believe the brothers and have, at the very least, serious questions about Jussie.

To end their segment, ABC hammered home how they weren’t responsible for how much airtime his problematic story got to begin with. GMA’s weekend anchor Dan Harris worried that just Smollett, not their network or the media as a whole, had caused damage for actual victims of hate crimes. Dan Abrams agreed, even admitting that the media “wanted” to believe Smollett’s account.

DAN HARRIS: If Smollett made this up, what kind of impact does this have on other people that come forward to tell stories that are true about assault?

ABRAMS: I think that is the real impact here. I think this would have a big impact on the country. Which is, you want to believe someone. I mean, you're talking about an allegation of homophobia, racism, politics, all of it in one allegation. If it turns out that this well-known person just made this up, it's going to, I think, lead some people to have questions about coming forward. It will lead others having questions about whether they believe people's accounts. This is having a much bigger impact I think than just on this particular case.

ROBERTS: All across the board.

MICHAEL STRAHAN: Could be a big setback if that's the case.

"Yes. It is a very interesting turn in this case. I know people who talked to Jussie over the weekend. He insists that he had nothing to do the story. The more you hear, the more questions that are being raised. The investigation we should stress is still underway," she gushed.