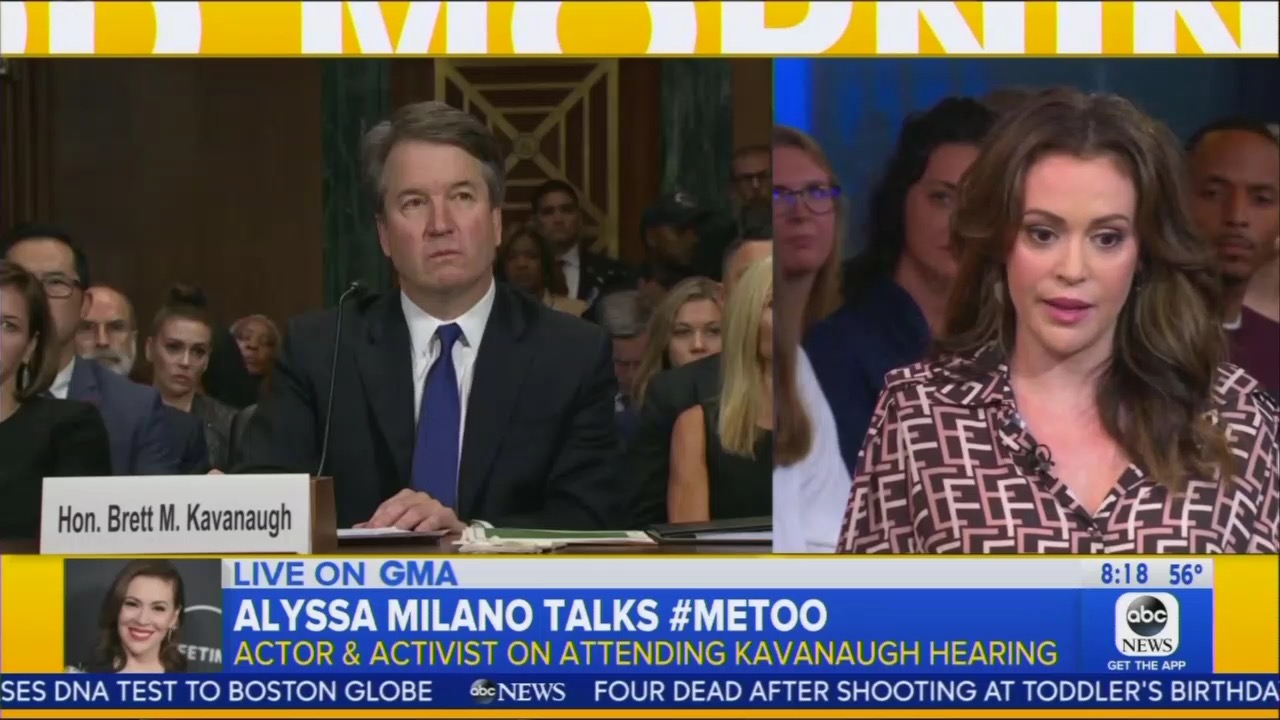 Actress and liberal activist Alyssa Milano appeared on Good Morning America Monday to talk about the one year anniversary of the #MeToo movement which she helped start. Milano, who has been a vocal critic of President Trump and Republicans, also took time to bash Trump for raising concerns about false accusations, saying that he was only afraid of “progress” because “white men” were losing their power.

ABC White House correspondent Cecilia Vega asked Milano about how the cultural movement started and where it was going, before getting political. She asked the actress first “what it was like” being in the room when Justice Brett Kavanaugh was giving his testimony before the Senate Judiciary Committee.

Milano simply called it “intense” before slamming Republicans for not listening to her or her fellow activists’ stories of sexual abuse:

It was intense, and I really ran the gamut of emotions sitting in there. Even more intense was the day before I went to the building and I went to all of the Republican senators' offices and we told our stories with their constituents of our sexual abuses and none of them came out of their office. So that, to me, was the most heartbreaking moment, but it also made me realize how much more work we have yet to do.

After getting the dig in at Republicans, Vega gave Milano an opportunity to make a direct jab at President Trump for his support for Kavanaugh. The actress criticized Trump for being concerned about false accusations, as just a “fear tactic” used by “white men in power” who are afraid of the #MeToo movement’s “progress.” Milano also seemed to justify the idea that men could be put under undue scrutiny by sneering that “women have had it hard for generations.”

At the same time, the actress called for “everyone getting a fair shot” while dismissing the idea that false accusations occur, citing it happening just “two to eight percent” of the time:

VEGA: One of the arguments that has come out in the wake of that -- we hear it from the president, we hear it from his family, is that boys. They are concerned about boys. They say boys have been wrongfully accused and that stains a person's life. You have a daughter and you have a son.

MILANO: I don't know why their concern isn't that boys could also be hurt and molested and sexually assaulted! I'm of course, concerned for boys, but I'm not concerned for them in the way that I think the president is concerned for men, right? I think that any time something is progressing in a direction that might leave the power away or lead the power away from sort of the ‘white man,’ they like to use fear tactics, and the way in which to do that is to say, you know, ‘I think men have it very hard right now,’ and women have had it hard for generations, and there are going to be false claims, but we have to define what that process looks like of investigation, of giving everyone a fair shot because, you know, it's only 2% to 8% that are falsely accused and then only 70% to 80% of women come forward with their sexual abuses. So this is all -- this is all gray area and new territory that we have never faced before.