Stephanopoulos Moves Goalposts on Kavanaugh: Should FBI Investigate, Was He Lying About Drinking? 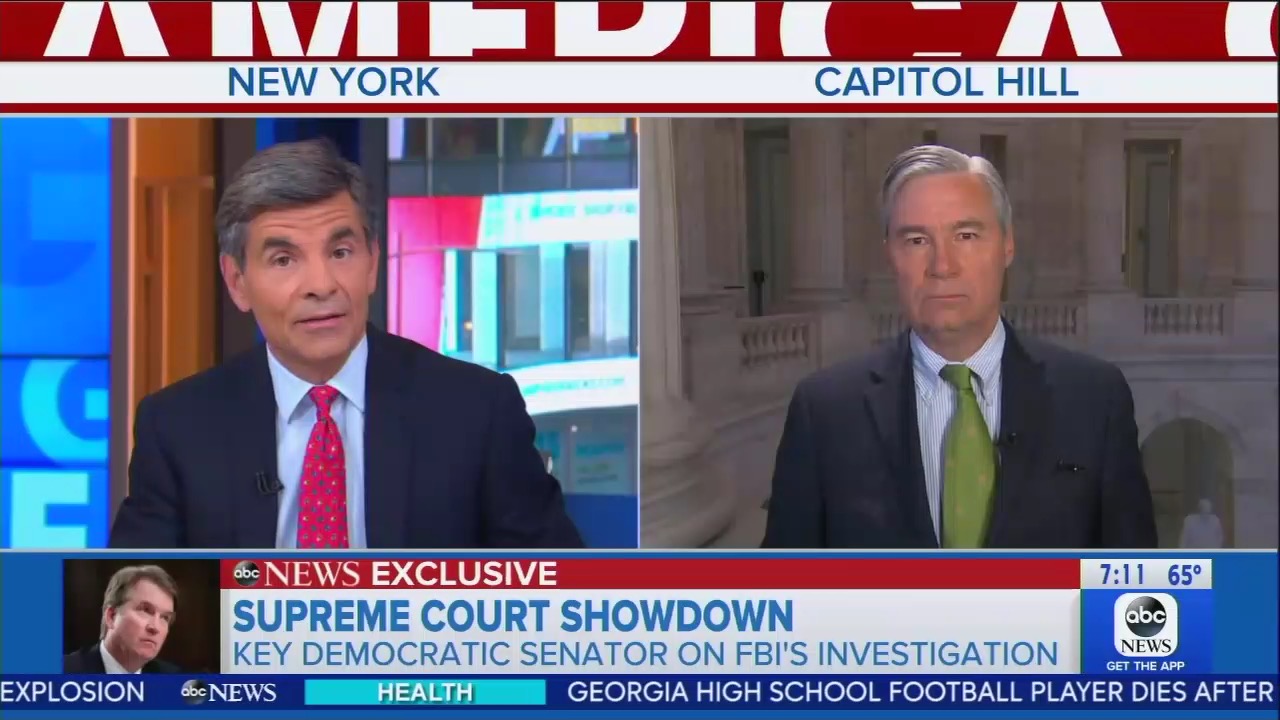 As everyone already knew, Democrats were never going to be satisfied with a one week FBI investigation into Supreme Court nominee Brett Kavanaugh. As Friday draws nearer, journalists are aiding desperate Democrats, who see that Christine Blasey Ford’s allegations will not hold water, in coming up with a new strategy of how they will block Kavanaugh’s confirmation; namely, that he allegedly lied under oath. On Tuesday’s Good Morning America, anchor George Stephanopoulos promoted that last ditch effort in his interview with one of the Democrats on the Senate Judiciary Committee, Sen. Sheldon Whitehouse.

In the three minute interview, Stephanopoulos gave Whitehouse four softball questions and only one neutral question. Right from the get-go, he entertained Democrats’ ever-changing demands on this confirmation process, asking if a one week FBI investigation was really fair:

“Are you satisfied now with the scope of the FBI inquiry and can they finish by Friday?” he asked the Democrat. Surprisingly Whitehouse was less eager than Stephanopoulos, saying that he thought it was enough time to find out what they needed to know, given the small amount of witnesses. That’s when Stephanopoulos helped move the goalposts on Kavanaugh even further, wondering if proof for Blasey Ford’s allegations were really what Democrats needed to stop Kavanaugh, or was it now whether he lied under oath about drinking beer:

STEPHANOPOULOS: You say it's a fairly small group of witnesses and I guess the question is what exactly are they investigating? Are they simple investigating the two incidents, one with Deborah Ramirez and one wh Dr. Ford, or are the doing a broader investigation into Brett Kavanaugh's drinking in college and whether he was truthful about it before your committee?

WHITEHOUSE: I think probably a little bit of both. Clearly Ms. Ford's testimony is very important. She's the witness who has had her story aired very publicly and she's been subject to trained cross-examination and she came through with flying colors and 100% identified Brett Kavanaugh as her attacker. So that's got to be front and center. The Ramirez allegations haven't had the same airing but there are witnesses around that incident that need to be interviewed and then I'm not quite sure where they’re going with respect to Miss Swetnick's allegations, but ultimately I do think when somebody is coming before the United States Senate and they want to be a United States Supreme Court judge they ought to tell the truth. If they're lying that's something that should be disqualifying.

The ABC anchor followed up by asking the Democrat repeatedly whether Kavanaugh lied to the committee about his drinking habits in high school:

STEPHANOPOULOS: Do you think he told the truth to your committee?

WHITEHOUSE: I have very grave doubts a this point but that's one of the reasons we so badly wanted an investigation so we could get to the trust of that rather than have to deal with surmise or suspicion.

Stephanopoulos pressed the Democrat to call Kavanaugh a liar again at the end of the interview, asking, “And you believe it [lying] happened?”

Whitehouse claimed there was “plenty to disbelieve” in Kavanaugh’s testimony but he was waiting for the FBI investigation to come back with a report first before making a definitive judgement.