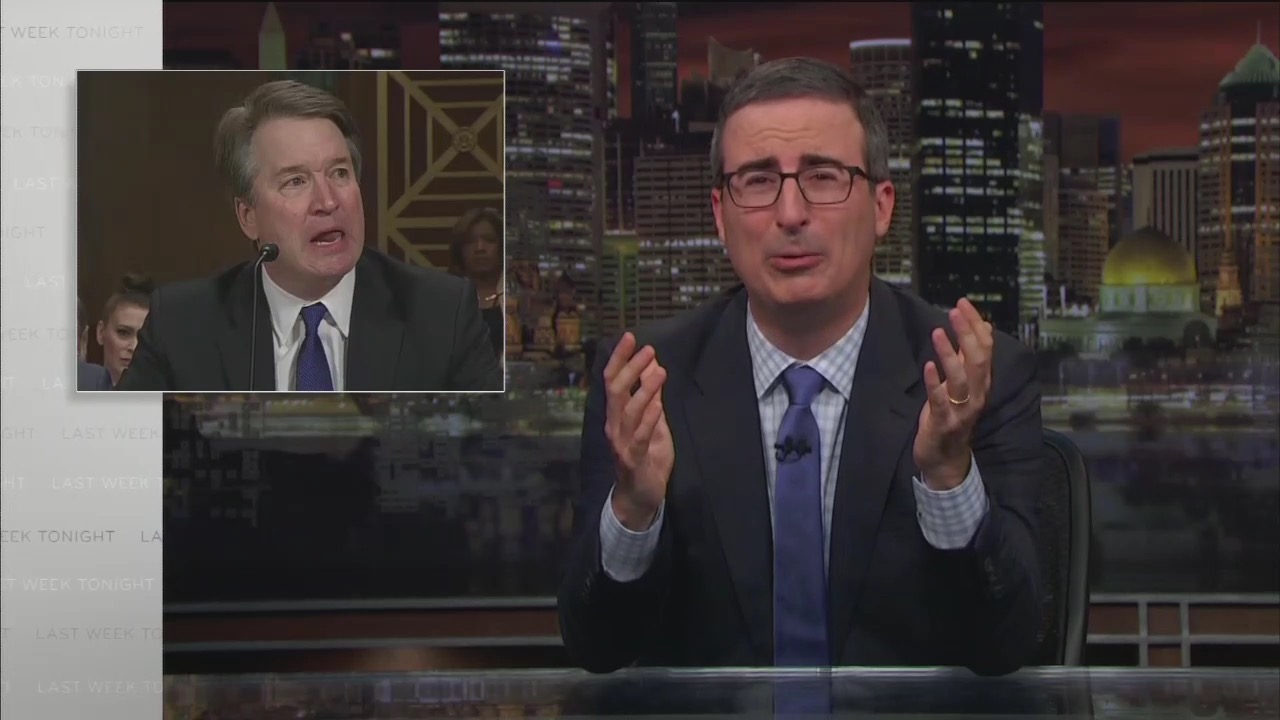 Liberal comedian John Oliver spent the majority of his Last Week Tonight show Sunday mocking Brett Kavanaugh’s emotional testimony before the Senate Judiciary Committee last Thursday and bashing Republicans for continuing to support his nomination. Oliver’s vulgar rant attacked the judge for everything from being too weepy and too angry, to too controversial and too partisan to be worthy of confirmation.

Playing clips of Kavanaugh during his opening statement, Oliver mocked that he was “too emotional” to sit on the Supreme Court, while Ford was “remarkably composed.” Much like Matt Damon did on Saturday Night Live this past week, Oliver did an over-the-top impression of the “entitled, surly” Kavanaugh yelling before bashing his response to whether or not he likes to drink beer as akin to denying bestiality:

Okay, so first, aside from being deeply disrespectful, "Have you?" Is just not the answer of an innocent person. If you ask someone if they ever blew a dog, and they go, "I don't know, have you?" That person blew a dog. And in all likelihood, not just one either. And that surly tone was emblematic of Kavanaugh's demeanor throughout the hearing. Not the tone of a man who hopes to one day have the honor of serving on the Supreme Court, but the tone of someone who feels entitled to be on it and frankly can't believe you're being such a dick about this, and it actually does make some sense. Because this is a man who has had every imaginable advantage.

Oliver berated Kavanaugh’s combative responses to often combative questions from Democrats as unwarranted and unbecoming of a judge:

[H]e talked over the top of senators, dodged questions, and conflated "doesn't recall something happening" with "Denies something happened," which is, again, a fucking important distinction for a judge. Not to mention, he repeatedly wept at the concept of calendars.

He added that it was “horrifying,” and “positively Trumpian” for Kavanaugh to call out the political biases of his questioners, saying “Kavanaugh just all but came out and said that he's going to approach his entire tenure as one giant case of "Me versus the fucking libtard cucks.”

Oliver then berated conservatives for supporting the “asshole” Kavanaugh to get a pro-life judge on the bench, saying that he could nominate any other pro-life judge or as he put, “restrict abortion rights:”

You don't need to choose an unhinged partisan with multiple accusations of sexual misconduct hanging over him. So it feels like they're doing this just to deliver a "Fuck you" to Democrats and even more directly, a "Fuck you" to women.

The comedian ended the show by desperately urging viewers to call their senators to tell them to block Kavanaugh, while talking to a puppet who was supposed to represent the judge: