Chris Christie Snaps at Sunny Hostin Over Kavanaugh on GMA: ‘Save That for The View!’ 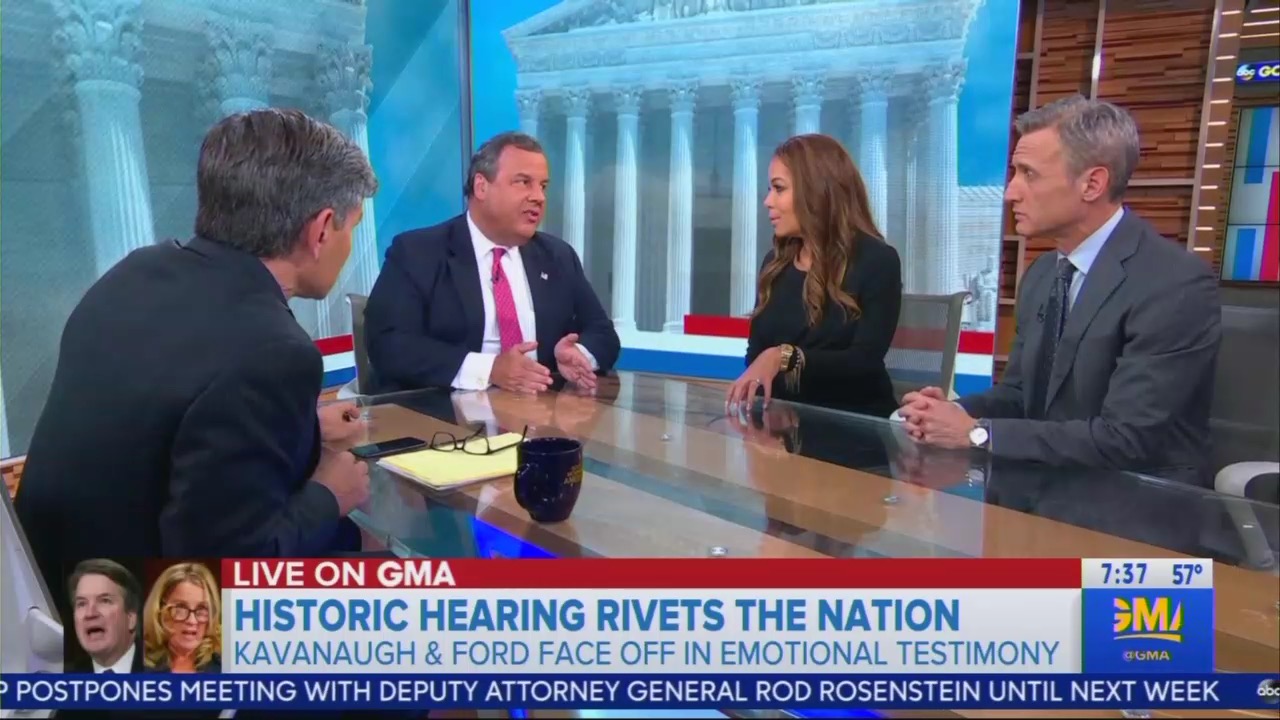 Friday morning on Good Morning America, the ABC panel assembled exploded while discussing yesterday’s Senate hearing over Judge Brett Kavanaugh and what should happen going forward. Contributor and former Governor of New Jersey Chris Christie butted heads with ABC legal analyst and The View co-host Sunny Hostin as she parroted the Democrats’ line that an FBI investigation was needed before Kavanaugh could be voted on by the Senate.

Anchor George Stephanopoulos led the panel, first asking Chief Legal Analyst Dan Abrams how the Senate could proceed “in the face of that doubt” over what happened in 1982. Abrams argued that because both sides showed to be persuasive, the burden of proof is on the Democrats to stop his confirmation and that was unlikely to happen. ABC contributor Chris Christie agreed, saying that Democrats didn’t successfully make their case Thursday that Kavanaugh was disqualified for the position. ABC legal analyst Sunny Hostin was irate at that notion that this whole entire hearing was political:

“But sexual assault should never be a partisan issue. That is an issue of right and wrong and I think what's terrible people are saying her testimony while credible isn't corroborated. The reason it's not corroborated is because the record is incomplete here!” Hostin gushed, adding that sex assault cases don’t generally have eyewitnesses but in this case, it did, in the person of Mark Judge.

“He does not corroborate her,” Christie cut in.

But she argued, “No that's not true. He says he doesn't recall what happened.”

“No, but--” Christie started to answer again before Hostin interjected to parrot the Democrats’ line. “Why isn't there an FBI investigation?” she demanded.

An irritated Christie snapped back, “Hold on,” before continuing to respond.

“What she [Hostin] just said was that, you know, never has corroboration. There's no corroboration here even though she named a witness. She named someone--" Christie started. But Hostin wasn’t done with her grandstanding.

“That's because the Senate doesn't know the truth. The Senate does not cooperate!” Hostin started to argue before Christie snapped at her.

“Sunny listen, you can interrupt everybody else. Don't interrupt me. Save that for The View,” he snarked before continuing:

“The fact of the matter is she named him. He put in a letter to the Senate under penalty of a 1001 violation and jail time saying he cannot corroborate her story,” Christie stated.

Hostin continued to argue back, replying, “He cannot recall.”

Christie got the last word before Stephanopoulos changed the topic:
“That's not corroboration then. Sunny. I'm sorry. I know you'd like it to be but it's not,” he snapped back, calling out the liberal analyst’s political bias.