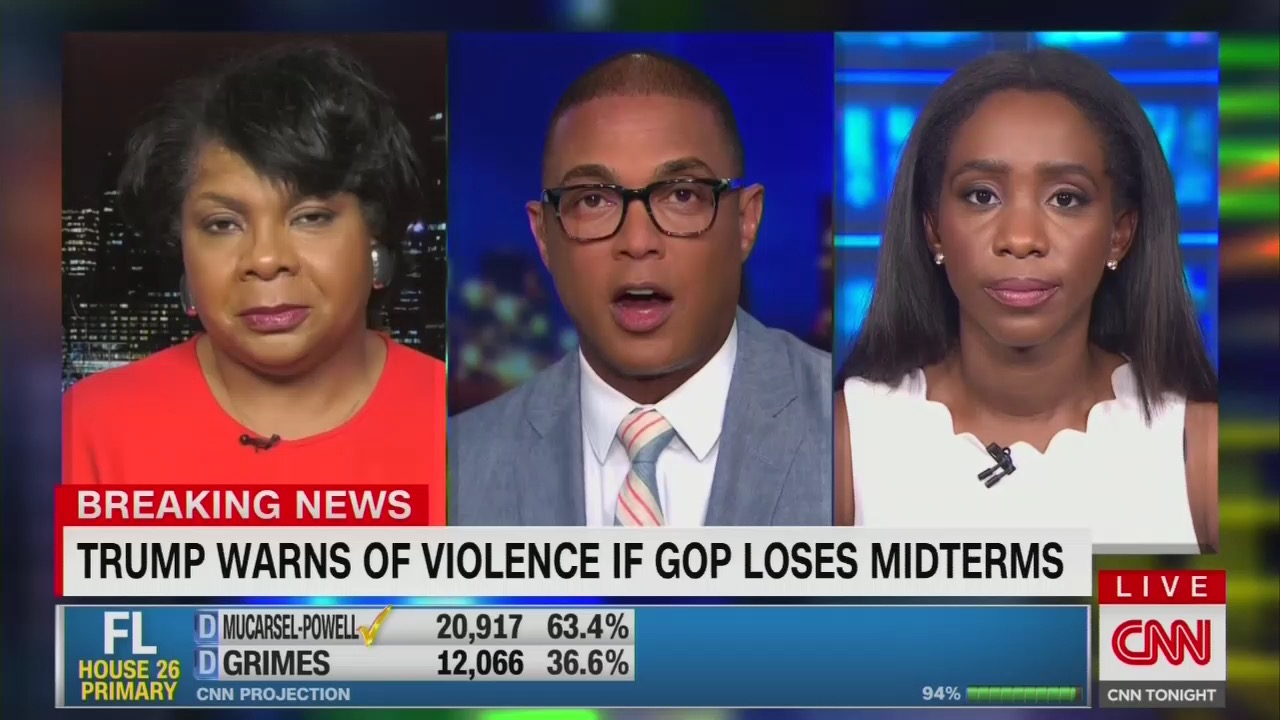 Don Lemon was so aghast about President Trump’s comments on Antifa being bolstered if Democrats sweep the Midterms this Fall, that he devoted three separate segments on his two hour show Tuesday night to it.

After reading the quotes, where Trump warned of violence from the left during a closed door meeting with Evangelicals Monday, Lemon brought on his guests, CNN White House Correspondent Abby Phillip and CNN analyst April Ryan during the 10PM EST hour to discuss.

Slamming the warning as “fearmongering,” Lemon prodded Ryan, who has been a WH correspondent for 21 years, to share with the audience how unprecedented this kind of rhetoric from a president was. She happily obliged, slamming Trump as creating a “common enemy” to unify his base and blamed him for creating “division” in the country. She added:

Lemon, who denies being a race-baiter, then weirdly connected race to Trump’s comments.

“Listen. There is, you know, there is a racial component to this because he is linking Antifa to Democrats,” he stated.

He went on to say this was all about the horrible events in Charlottesville last year:

But in that statement, you didn't hear anything because -- he is the first -- we heard of this President mentioning Antifa was for Charlottesville, right? So we haven't heard him link neo-Nazis to Republicans. So there is an appeal to racism here. Is he appealing for that?

Both Ryan and Phillip jumped in to confirm Lemon’s suspicions. Ryan got the first word and ranted about how Trump used racism to rally his base:

Well, yeah actually, he is. This President knows his base has a real issue with the issue of race. Race is that thing that makes this President tick. He started with birtherism and he has continued on and on. And his base rallies behind him. But it is dividing the nation. And he has not apologized, taken anything back. And it is not a good look for a President of the United States, and it is dividing the country, when he says he is a unifier.

Phillip agreed and denied that Antifa was that closely connected to Democrats. She added that this was all a distraction and a way to unify his base around a perceived enemy that isn’t really that big of a deal.

“So this has been the thing that a lot of the President's base has held on to. And that is why we are talking about Antifa, not because Antifa is something that is a widespread phenomenon,” she argued.

Lemon ended the segment by rationalizing and seeming to defend the violent group.