'Comedian' Michelle Wolf: Abortion 'Should Be on Dollar Menu at McDonald’s!' 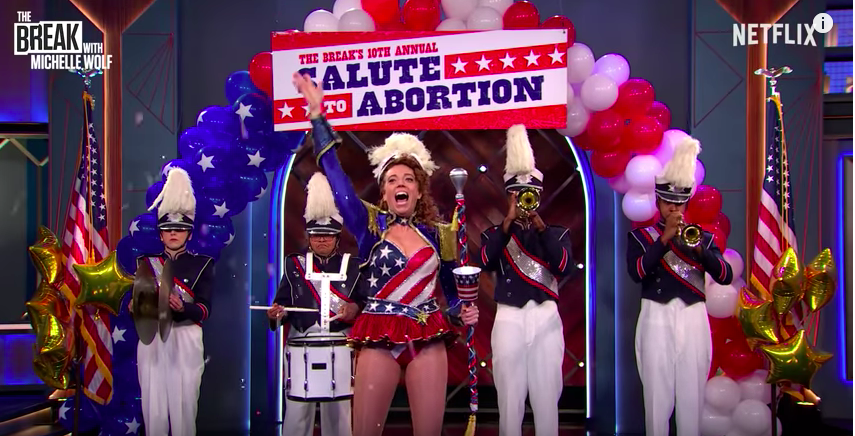 It seems like former Daily Show star Michelle Wolf is really trying to one-up TBS’s Samantha Bee for the nastiest, foulest, most partisan female comedian on television. After making mean-spirited swipes at women in the White House when she hosted the White House Correspondents’ Dinner this April, she’s taken her vulgar routine to Netflix in her new show, The Break With Michelle Wolf, which premiered just a few weeks ago.

While last week she reveled in being called “unhinged” by critics, she more than lived up to that moniker on this week’s episode, delivering a disgusting and insulting patriotic “salute” to abortions, to celebrate Independence Day.

The subject was Supreme Court Justice Anthony Kennedy’s retirement and President Trump’s opportunity to fill his seat with a more conservative justice. As the media melts down over the idea that abortion rights might be limited in the future, Wolf took part in the epic pity party, attacking anyone she saw as responsible, which included Trump, men and Christians.

Starting with Trump, she snarked:

It’s so ironic that Trump could be the guy who ends legal abortion.That dude has been responsible for more abortions than the invention of back alleys. [laughter] [to backstage] We were originally going to use coat-hanger! And before that, stairs!

She also attacked men as not only useless, but having no say in whether or not their child gets to live:

To any men watching, I’m sure this brings up a lot of feelings and thoughts and points you want to make, and I just want you to know that’s all very irrelevant. [applause] Abortion is a woman’s right. And I know acknowledging that is hard for some of you, because that would mean you’d also have to acknowledge that women are naturally equipped to do the most powerful thing in the world: give life. While you guys are naturally equipped to do what? Lift suitcases into the overhead compartment? If women embrace the fact that they control life, that makes it a lot harder for men to control women.

But she saved her nastiest insults for those who defend humans in the womb, spewing that the term “pro-life” is “propaganda” before delivering the left’s usual rhetoric about pro-lifers not caring about children outside the womb:

I know some people call themselves ‘pro-life,’ but pro-life is a propaganda term that isn’t real, like healthy ice cream and handsome testicles. Get the terminology straight. First of all, these people are anti-abortion, which means their anti-woman. If these people were actually pro-life, they’d be fighting hard for healthcare, childcare, education, gun control, and protecting the environment. But these anti-abortion do not care about life, they just care about birth. Like they think that’s the only place you can watch a woman shit on a table!

She briefly encouraged abortion providers to stand up to the “terrorism” they faced from the pro-life community and be “proud” of the “good thing” they were doing for women.

Again, Wolf used some mental gymnastics to justify how abortion wasn't “killing” a baby, it was “stopping” it from being born:

Some people say abortion is ‘killing a baby.’ It’s not! It’s stopping a baby from happening. It’s like Back to the Future and the abortion is the DeLorean. And everyone loves DeLoreans!

Wolf even claimed that abortion was such a no-brainer that it should be as easy to obtain as ordering a movie on television. In fact, it should be as quick and cheap to kill your baby as it would be to order a burger from McDonald’s “dollar menu,” she said, "Abortion shouldn’t be a luxury...it should be on the Dollar Menu at McDonald’s! ‘Hey, I’d like a large diet Coke, and can you get this egg out of my McMuffin?’”

Apparently the left really does put a price point on a human life.

Wolf ended this “funny” segment by donning a patriotic ensemble, coming back out with a marching band, and encouraging pregnant women and "women who may be pregnant in the future" to get abortions. “It doesn’t have to be a big deal. It’s actually a great deal!” she gushed. “And women, don’t forget, you have the power to give life and men will try to control that. Don’t let them!” she reiterated.

It’s hard to believe anyone would find this funny. For such a disgusting display you’d think there’d be at least some critics of Wolf on the left. But if there are, they aren’t talking. The Daily Beast’s Matt Wilstein was all praise, gushing, “This is why it’s so important to have women hosts in late-night television.” Slate was similarly positive, wondering, “why more late-night talk show hosts don’t produce segments defending abortion as a positive good.” Entertainment blogs similarly described her gleefully “taking down” “anti-abortionists” and Republicans with no hint of controversy.