Late Monday, after the White House’s official Twitter account called out Democrats for their positions on ICE and MS-13, some members of the media went berserk at the audacity of the White House Twitter going after senators for their policy positions. NBC's Andrea Mitchell even went so far as to claim that Trump was violating the law by doing so. However, archived White House tweets from the Obama era, revealed the media's two-faced stance on these actions.

.@SenWarren, why are you supporting criminals moving weapons, drugs, and victims across our nation’s borders? You must not know what ICE really does. Here is a link to help you out: https://t.co/5CiTKkIs4c

.@SenWarren, why are you supporting criminals moving weapons, drugs, and victims across our nation’s borders? You must not know what ICE really does. Here is a link to help you out: https://t.co/5CiTKkIs4c

It is unprecedented and unsettling to see the verified @WhiteHouse @Twitter account attacking @SenWarren @SenKamalaHarris over their responses to ICE and the immoral separation and detainment of children and their parents at the border. https://t.co/J6dI4gpNs6

While NBC's Andrea Mitchell took it a step further calling it a breach in ethics and a violation of the law:

Questionable on ethical and legal grounds to attack them from the official White House account https://t.co/nbARGvS6wA

Re: White House tweets attacking Senators: Section 1352(a) of Title 31: No part of the money appropriated by any enactment of Congress shall..be used directly or indirectly to pay for any .. written matter... intended or designed to influence in any manner a Member of Congress

While Mitchell's Twitter followers ate that up, critics quickly showed her how wrong she was. The Federalist’s Gabriel Malor tweeted that Mitchell’s false claims “disgusted” him, pointing out that the U.S. code she was referring to is talking specifically about financial influence:

Sec. 1352(a) doesn't say "influence in any manner." It says influence in connection with a list of contracting and financial actions.
https://t.co/Kn2iE2ktOr https://t.co/kSXZwWRpCg

Not only that, but the tweets certainly weren’t unprecedented. The White House’s archived Twitter account for Obama shows that the White House has definitely gone after senators on Twitter before. Fox & Friends pointed out the hypocrisy on Tuesdays show.

After reading the tweets, host Pete Hegseth mocked, “Got to be unprecedented then! Stunning that, only this White House, Steve would do that.” Fellow host Steve Doocy remarked, “Apparently there has been some sort of memory loss because this happened during the Obama administration [too],” before showing tweets from 2014 such as the one below: 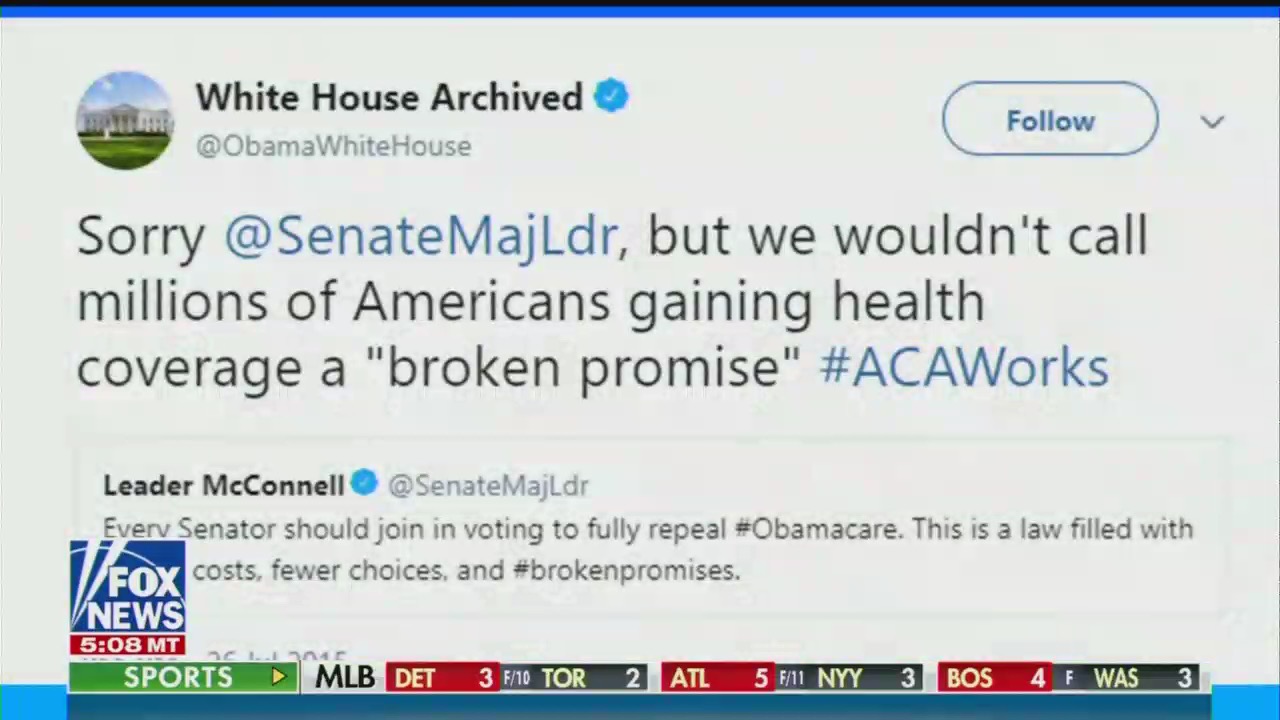 There were even more that Fox didn’t show:

Instead of acting to help millions of Americans, House Republicans are suing the President today. #DoYourJobHouseGOP pic.twitter.com/vvxzFj43yo

Republicans in Congress are choosing tax breaks for millionaires over meals for seniors: http://t.co/DRFsn5VCG0 pic.twitter.com/8GRGVnDFp7

RT if you agree: It's time for Republicans in Congress to prevent terror suspects from being able to buy a gun. pic.twitter.com/4iJapwEy3L