Michael Eric Dyson: Trump 'Excretes Feces of His Moral Depravity' Into Country He Turned Into Toilet

Fast-talking Georgetown professor and New York Times’ contributor Michael Eric Dyson was the guest on ABC’s The View, June 4, where he proceeded to “educate” the panel and viewers about the differences between bigots and racists, and how Republicans were seemingly both. 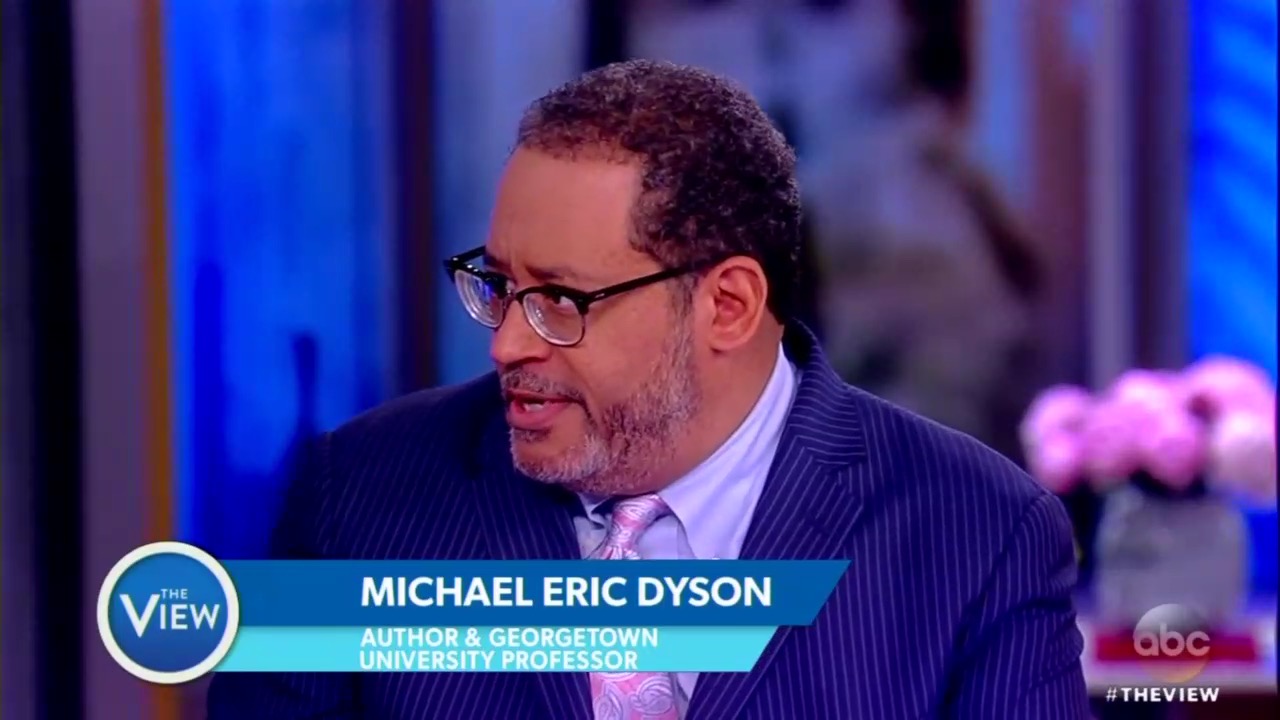 Dyson was there to plug his new book about race relations in America, entitled What Truth Sounds Like, and the liberal hosts happily provided open-ended questions which let the chatty Dyson spout off on how racism thrives on the right and with Trump supporters.

Co-host Joy Behar led the interview by asking Dyson to comment on Rick Santorum’s comments from Sunday, where he said that former President Obama “exacerbated” racism in the country. Santorum was referring to Obama publically taking sides with the anti-law enforcement, Black Lives Matter movement, but Behar did not provide context.

Huffing at those words, Dyson went off on one of his typical fast-talking, quick-witted tangents, that only really makes partial sense. Complaining about Santorum living in the “United States of amnesia,” he went on to crassly characterize the president’s tweets as defecating in the toilet of this country:

We got a guy who gets up every morning and excretes the feces of his moral depravity into a nation he has turned into a psychic commode.That’s what he’s done. And he’s a bigot-in-chief and a racist in residence...and his inability to acknowledge the fact that there are differences between people who argue against racism and who are for it.

He went on to lecture that blacks may be bigoted against whites but they didn’t have the “systemic” power of white privilege, so somehow that makes their prejudice okay:

Let me tell you the difference between a racist and a bigot. A bigot is someone who makes an idol of his or her commitments. All of us can be bigots. But racism presumes that you have the power to regulate my life to a living hell…to enslave me, to have Jim Crow...black people have a lot of things, prejudice and bigotry but racism presumes a kind of systemic power that they have access to, to re-enforce others' lives as living hell.

After talking about Kanye West, co-host Meghan McCain quoted a line from Dyson’s new book, saying that Democrats needed to be more interested in black interests, rather than just black votes. Somehow that invited the professor to complain about blacks who voted for Trump instead of Clinton:

People say, well, Hillary Clinton wasn't likable. She ain't going to be your girlfriend. She got a man. She was trying to run the nation. She has more knowledge in her little finger than this man has in his entire body, and --- and on top of that --- and on top of that, she also possessed the kind of integrity. We were doubtful of her? Look at this mendacious, relentlessly lying, bigoted, ill-informed person that we have. He has the fleshly thesaurus of white supremacy reduced to one body.

Referring to church-going African-Americans, Dyson griped that the rights’ racism kept them from taking advantage of black votes:

McCain pushed back against Dyson’s extreme rhetoric before getting the last question in to close the segment.

“I don’t believe all Republicans are racist, I actually think that kind of blanketing is dangerous,” she argued.

He conceded that not “all” Republicans were racist but “enough” of them were, before the conversation wrapped up shortly after.