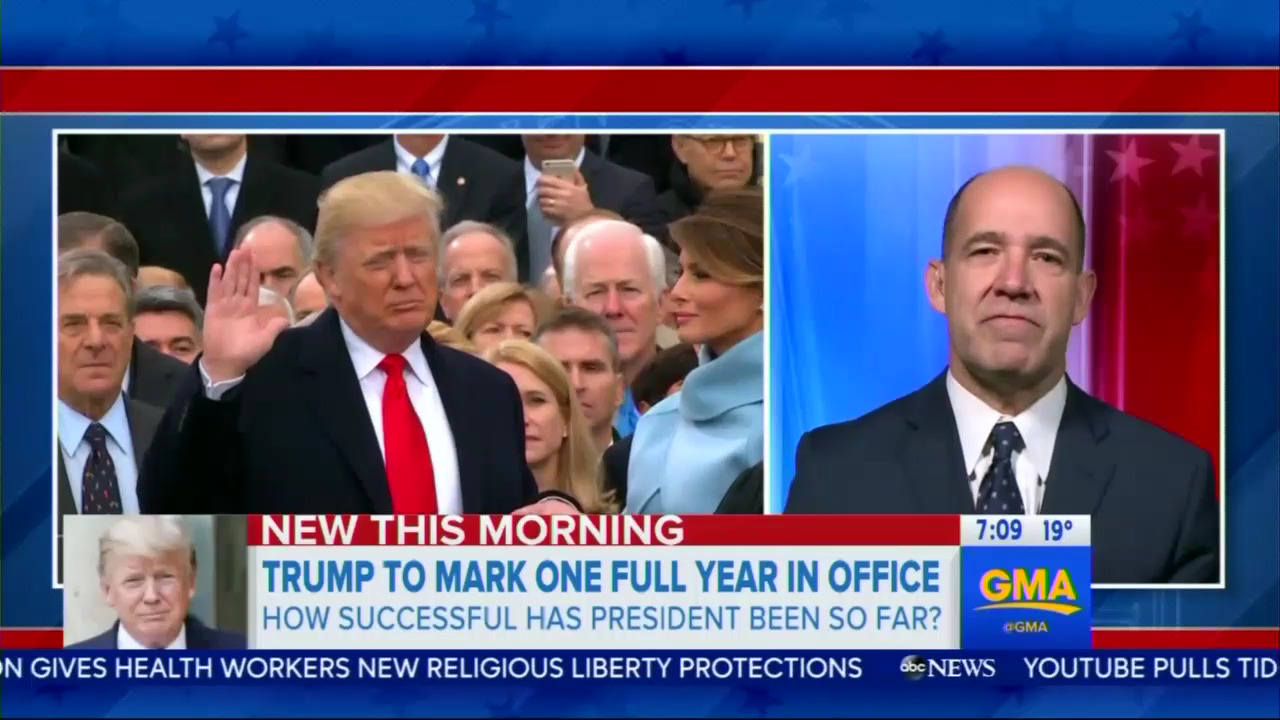 ABC's political analyst Matthew Dowd compared the current situation to the Jimmy Carter era, on January 19th's Good Morning America, saying that Democrats had the upper hand with Americans' sympathies, because they didn’t have “control” of Congress or the White House.

Before this, a frantic Mary Bruce and correspondent Tom Llamas hyped in separate reports that "millions" of Americans were the real victims of the potential shutdown. But even ABC’s fear-mongering couldn’t find any specific horror stories to share. Llamas listed federal workers as the only ones who wouldn’t get paid, as well as military service members who might get delayed paychecks.

Bringing in Dowd, Stephanopoulos accidentally referred to him as “Jon,” which resulted in a slight delay. The GMA anchor noted President Trump was “blaming Democrats” on Twitter, but questioned who really was to blame for the potential shutdown. Teeing up the softball, Stephanopoulos suggested it was Republicans, because they “controlled” Congress and the White House.

“So this gets into the question of who’s really going to bear the blame for this shutdown? This would be the first time it happened with Republicans in control of the House, the Senate and the White House,” he prompted.

Dowd took the bait, noting that the last time there was a Republican majority in the White House and both houses of Congress and a shutdown occurred, it did not end well for Jimmy Carter and Republicans. He added that the odds were in Democrats’ favor that most Americans would blame Republicans for any potential shutdown, (as if the media had no part in that narrative!):

If this was a high stakes poker game, if this was a Texas hold 'em tournament the Democrats' hold cards are much higher than the Republican hold cards are. The last time one party held all the offices, the president, the House and the Senate, and a shutdown occurred was in the '70s, with Jimmy Carter. That historical president where Jimmy Carter ended up losing the presidency in 1980 and Democrats lost seats in the House in the Senate in 1978 is not a good precedent so right now I think the odds favor if there is a shutdown politically it's going to benefit the Democrats.

But ABC didn’t want to forget to blame Trump, too. Stephanopoulos gushed to Dowd that the president had the “lowest approval rating for any president starting a second year,” into his term, inviting Dowd to bash Trump as well.

Dowd happily obliged, saying Trump’s “unpopularity” and the GOP’s “unpopularity” was a clear sign as to who the American people would blame for this shutdown. “It's a perfect storm of bad politics in a midterm election year that could cause huge problems come November,” Dowd argued:

Yeah, George, the traditional gift as you know of a first anniversary is paper. And I think this president wants a bill written on paper that he can sign on his first anniversary. This is all headed to a situation, as you say, very unpopular president, very unpopular Congress, very unpopular Republican party. The Democrats are not that much more popular. It's a perfect storm of bad politics in a midterm election year that could cause huge problems come November.

Expect more of this blame-game while President Trump is in office. Last year, the networks hyped a potential government shutdown too, again blaming Trump trying to get funding for the border wall as the reason why it was likely to happen, taking Democrats stubbornness on DACA and illegal immigration completely out of the equation.