'View:' U.S. on 'Slippery Slope' to Stoning Gays Like In Iran 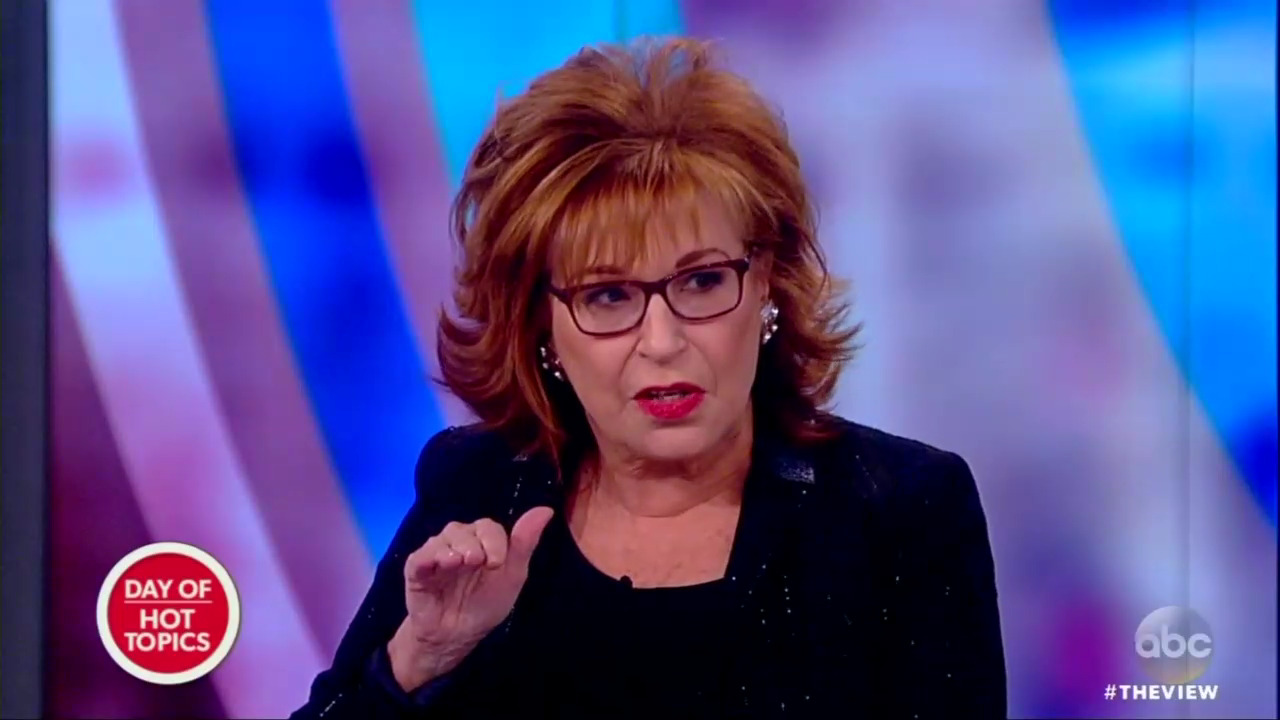 The hosts at The View are not strangers to comparing President Trump to dictators and terrorists. They spent several shows in 2016 and 2017 comparing the Republican agenda to terrorism, and claiming that Trump was turning America into the Taliban.

To kick off 2018, anti-Trump host Joy Behar again pushed that idea, on the January 2nd show, saying the U.S. was on a “slippery slope” to the kind of fight for democracy happening in Iran right now.

Co-host Whoopi Goldberg led the discussion by asking what issues were most important for Americans to care about in 2018.

“What do you think people need to keep their eye on?” Whoopi asked the rest of the panel.

Guest co-host Ana Navarro answered that the protests in Iran were the most important thing U.S. citizens needed to be aware of and support:

Today I would tell you that the protests going on in Iran are really important. There's very little that, you know, we can do as citizens, but it's very important to express solidarity with what's going on there. It's awe-inspiring. This is an autocratic regime. They are cruel. They've opened fire on these protests. There's now dozens of dead. You've seen the most inspiring visuals come out of this, things like women standing up and refusing to wear the veil.

“You cannot stifle freedom. At some point hope will come back up so we've got to keep an eye on it,” she stated to audience applause.

But Behar couldn’t let the opportunity pass to bash Trump, as usual.

“Of course, they told Donald Trump to stay out of it and not to tweet. Of course he did because telling him not to tweet is like telling a 5-year-old not to eat the candy. He can't help himself. He had to stick his two cents in it,” she scoffed.

“[J]ust mind your own -- stay where you are in Mar-a-Lago. Keep playing golf,” she added.

Surprisingly not every liberal host at the table agreed with her. Ana Navarro gently pushed back on Behar’s criticism.

“What I didn’t like him doing was turning this political by taking a shot at Obama and the Iran deal. There's a time and a place for that. Right now is a time and place to express solidarity,” Navarro stated.

Behar tried to take off on Trump again, asking, “Why does he always have to take a shot at Obama?” before fellow co-host Meghan McCain pushed back on Navarro’s statement:

The Iran Deal gave more money to terrorism and nuclearized the Middle East. Of all the things President Obama did that I disagree with, that was number one. I'm much more comfortable with the president tweeting about what's going on in Iran than Mika Brzezinski's alleged face lift. Quite frankly. So we need to dictate what we want him to tweet about. Again, when you're talking about international incidents like this which are of extreme historical significance right now, I think it's 100% totally fine.

But Behar couldn’t be dissuaded from her agenda against everything Trump does or says. She suggested that Trump didn’t really take terrorism seriously:

“I thought it was the Saudis who were really protecting terrorists?” Behar asked. I mean, 9/11 came from there, those terrorists came from Saudi Arabia. He's in bed with the Saudis all the time. So I mean, come on,” she scoffed.

Navarro brought the conversation back to the protests.

“To me right now we really have to keep our focus on Iran because if somehow they're able to get themselves free from these chains that bind them from this autocratic regime, it would be a huge game changer the world over,” she stated, before Behar more forcefully pitched her idea that Trump was leading the U.S. into a freedom-less dictatorship:

“I think that's true in this country also, if we can get away from him [Trump],” Behar snarked, to audience approval.

After host Sunny Hostin praised the protests and images of Iranian women removing their hijabs as “so powerful,” McCain tried to address Behar’s anti-Trump arguments:

“I just think having any kind of conversation about moral relativism in a country where we couldn't be sitting here without our heads covered, where gay people are literally murdered and stoned to death in the same streets and comparing it somehow to what's going on in the United States of America, for me when we have these conversations comparing the United States to Iran, that's where I end conversations and where I just leave because it’s ridiculous,” she gushed.

But Behar tried to walk back her comparison. “We're not comparing it--” she began before McCain cut her off.

“You just said we need to rise up against Trump in the same way like Ayatollah Khomeini is somehow morally relative to President Trump. I think that's crazy,” McCain stated.

"It's not apples and apples. It’s not equal. But we're on a very slippery slope in this country towards throwing democracy out of the window every single day,” Behar gushed.

Navarro chimed in with agreement that Trump’s relationship with the press was a threat to democracy, a favorite talking point by the media.

“We have to defend the press and civil rights here,” Navarro began.

“We do, but we don't stone people in the street for being gay,” McCain stated the obvious.

“Not yet,” Whoopi chimed in. “Not yet,” she repeated as McCain scoffed.

Hostin then placidly offered praise for Trump “weighing in” in support of the protesters:

And I think -- it's sort of important -- I think it's important to note that what is going on in Iran, one of the basis is people are protesting that they don't have the economic freedom that they need, that there's been a rise in costs for basic necessities and twenty protesters have already been killed by the government. And so their right to protest is under attack, and that's the one thing that Trump did that I thought, well, he weighed in about the protesters, in support of the protestors. That was okay.

“Well that was nice. That was nice of him. I wish he would also give that when people are protesting here,” Whoopi snarked.

Behar continued with the bitter commentary:

Later in the show when discussing President Trump’s interview with the New York Times where he said he had “absolute control” over the Department of Justice, Behar repeated her “slippery slope” argument:

“See this is what I mean Meghan, when I say we’re on a slippery slope. That’s a good example of it right there!” Behar gushed.

“He thinks he can do anything!” Hostin agreed.

Behar followed this up by taunting Trump for not going after their show on Twitter. “I think he’s scared of us,” she stated to audience applause.