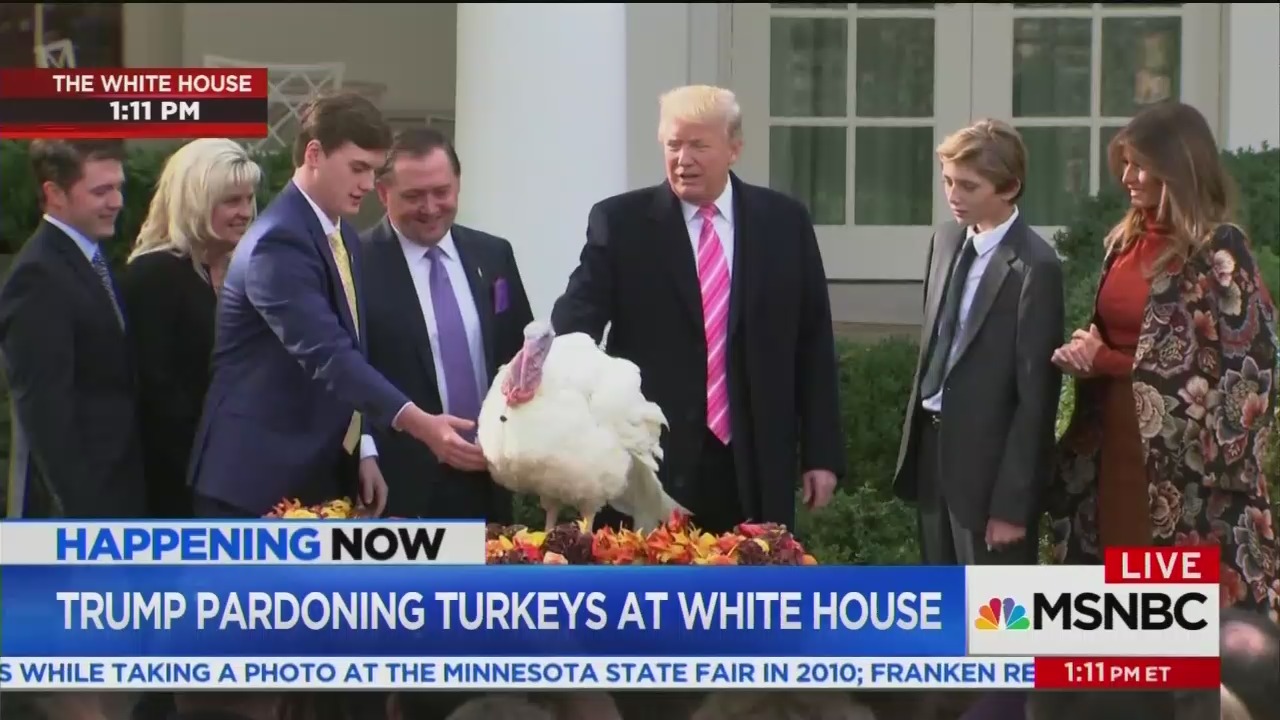 The tradition of the presidential turkey pardoning every Thanksgiving should be a light-hearted, fun event devoid of politics. But because of the media’s hatred for President Trump, even this pastime has been turned into a political gripe fest. As Trump carried out the annual holiday tradition, cracking jokes along the way as presidents before him have done, journalists took to Twitter to complain about anything and everything they could think to about the pardon, showcasing their inability to take a joke, for even a moment.

MSNBC AM Joy host and self-proclaimed member of the #Resistance against Trump, complained that she can’t enjoy these events anymore with Trump in the White House:

Gotta say these traditions -- the turkey pardon, and other cutesy things presidents do -- are lost to the ether for me when Trump performs them. The legal, ethical and moral clouds over his presidency are like a film on the camera lens.

While others used the pardon to make cheap shots against Trump.

Trump is more likely to seek consent from a turkey than a woman. https://t.co/lK1o8tzGvR

So consent is for turkeys. https://t.co/MuvJLcJDTJ

Some journalists revealed their obsession with Russia couldn’t stop them from making the turkey pardon about that too.

Trump tries to slip pardon for Don Jr in between turkey a and turkey b.

Will Saletan, writer for Slate:

Out: Pardoning a turkey.
In: Pardoning an unregistered foreign agent for Turkey. https://t.co/OwNd0IwZJ2

Others acted as if Trump joking about overturning Obama’s turkey pardons was a real threat.

While MSNBC's Morning Joe hosts Joe Scarborough and Mika Brzezinski took the same offense over the tame joke, in this exchange Thursday morning:

Still others felt the need to "fact-check" Trump.

Trump says Harry Truman "refused" to pardon a Thanksgiving turkey, says he's going to be "a much nicer president." Truman was given a turkey as a gift, he didn't "refuse" to pardon it. #turkeyfactcheck

As did Snopes, who wrote, "Reports that President Trump 'revoked all sixteen Thanksgiving Day turkey pardons,' ordering the birds executed by firing squad, were satirical."