CNN’s Toobin: Investigating Clinton 'Is What Happens in Authoritarian Countries' 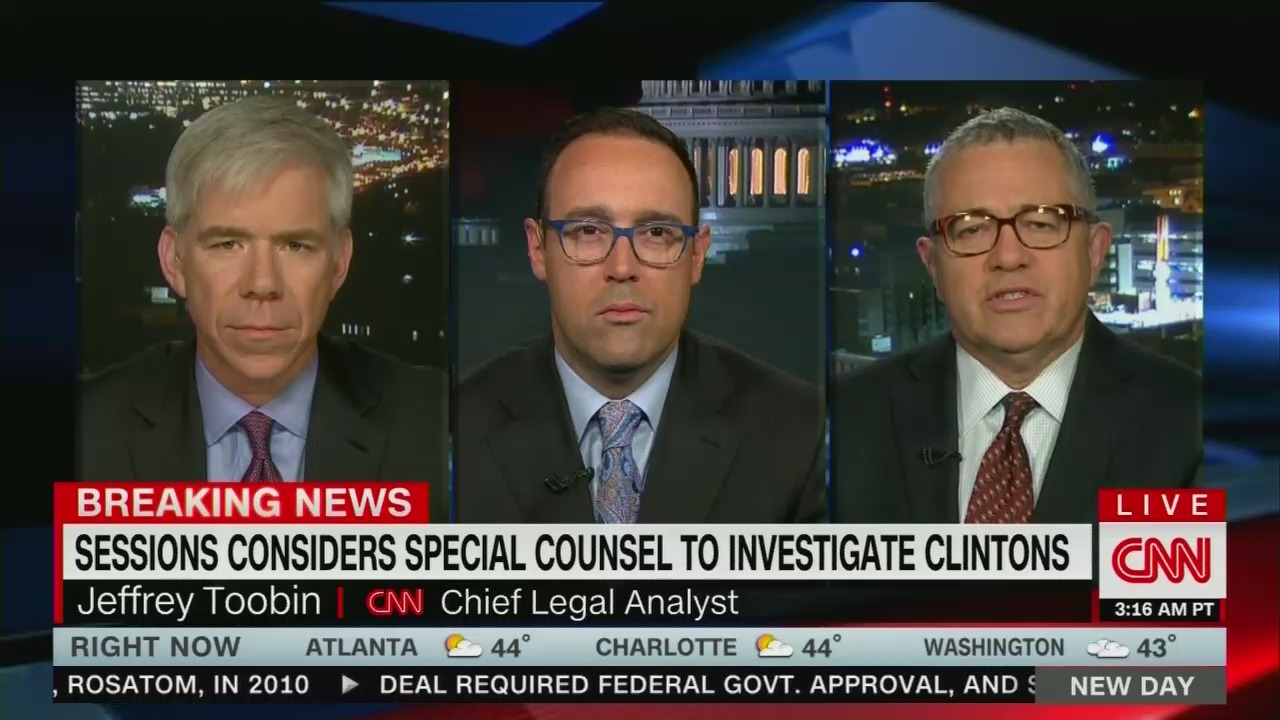 You know once the media starts bringing out the “dictator” and “authoritarian” rhetoric when it comes to President Trump, they’re truly worried about what may happen.

That’s where CNN went this morning after reports broke last night that the Justice Department may be appointing a special counsel to investigate the Clinton Foundation and Hillary Clinton’s e-mails. CNN’s Senior Legal Analyst Jeffrey Toobin took the news as a sign that America was turning into Russia, absurdly claiming that Fox News ran the Justice Department now, and that “this is what happens in authoritarian countries.”

New Day anchor Chris Cuomo led off the panel’s discussion at 6am EST Tueday, reminding viewers of the recent timeline of this probe.

CHRIS CUOMO: So, Paulina, let's put up what we know. You have November 3rd, The President of the United States says,"Look at them. Don't just look at me." That's basically what he's saying there. November 13th, all right, we get a letter from the U.S. Department of Justice directed to the honorable W. Goodlatte, chairman of the Judiciary Committee of the House of Representatives.

Bob Goodlatte in July and September sent two letters over to the Department of Justice saying the same thing. We want you to look into people on the left as well, this time in the form of the Clintons.

So, November 3rd, Trump tweets what he tweets. Ten days later U.S. Department of Justice responds to letters that they had gotten months earlier from Bob Goodlatte and says we are looking into this. If there is anything that needs more investigation than is currently going on the AG and deputy AG will look at a special counsel. I think the media is getting ahead of the headline a little bit. I don't think this letter says I'm going to appoint a special counsel as much as the media's saying it will.

Cuomo touted President Trump’s words last year, immediately following the election, where he said he wasn’t interested in continuing to go after the Clintons, now that he was president:

You have to put it in context. Back in November 22nd, after the election, the president was asked about this. Are you going to go after the Clintons? You kept saying you were going to all during the election. Here is what he said. When it goes up, I'll read it. There it is. “I want to move forward. I don't want to move back. And I don't want to hurt the Clintons. I really don't. She went through a lot. And suffered greatly, in many different ways and I'm not looking to hurt them at all. The campaign was vicious." So that's where this started.

Cuomo then claimed Trump was now bringing this up as a distraction from his own campaign being investigated for ties to Russia by Robert Mueller, suggesting that the Justice Department was being swayed by President Trump.

“Now because of what's going on with him, Jeffrey Toobin, do we see a very different posture now being motivated by the U.S. Department of Justice?” he asked.

Toobin laughably claimed he “didn’t want to be Chicken Little” but at the same time, “This is what happens in authoritarian countries:”

“You know, I don't want to be Chicken Little but this is what happens in authoritarian countries like Turkey and Russia. When a party takes power, they start criminally investigating their opponents. That's what this is, if it happens,” Toobin ominously noted.

He went on to dismiss these investigations as over and done with already, and wondered why “Fox News” ran the Justice Department:

“It hasn't happened, as you just pointed out, Chris. We're talking about the Clinton Foundation back in the '90s and the early part of this decade. We're talking about Uranium One, who has already been investigated. This is a question about whether Fox News runs the Justice Department or whether the career prosecutors run the Justice Department. And, you know, that's the issue here,” he stated.

CNN wasn’t alone in the absurd overreaction. ABC, CBS and NBC spent the morning attacking Attorney General Jeff Sessions’ credibility, and labeling his potential probe into the Clinton Foundation as a partisan hack job, while MSNBC’s Morning Joe also called the potential probe “something Joseph Stalin would do.”