‘The View’: ABC's ‘Scandal’ Is An ‘Escape’ ‘Privilege’ From the ‘Stain Of Our Country’ 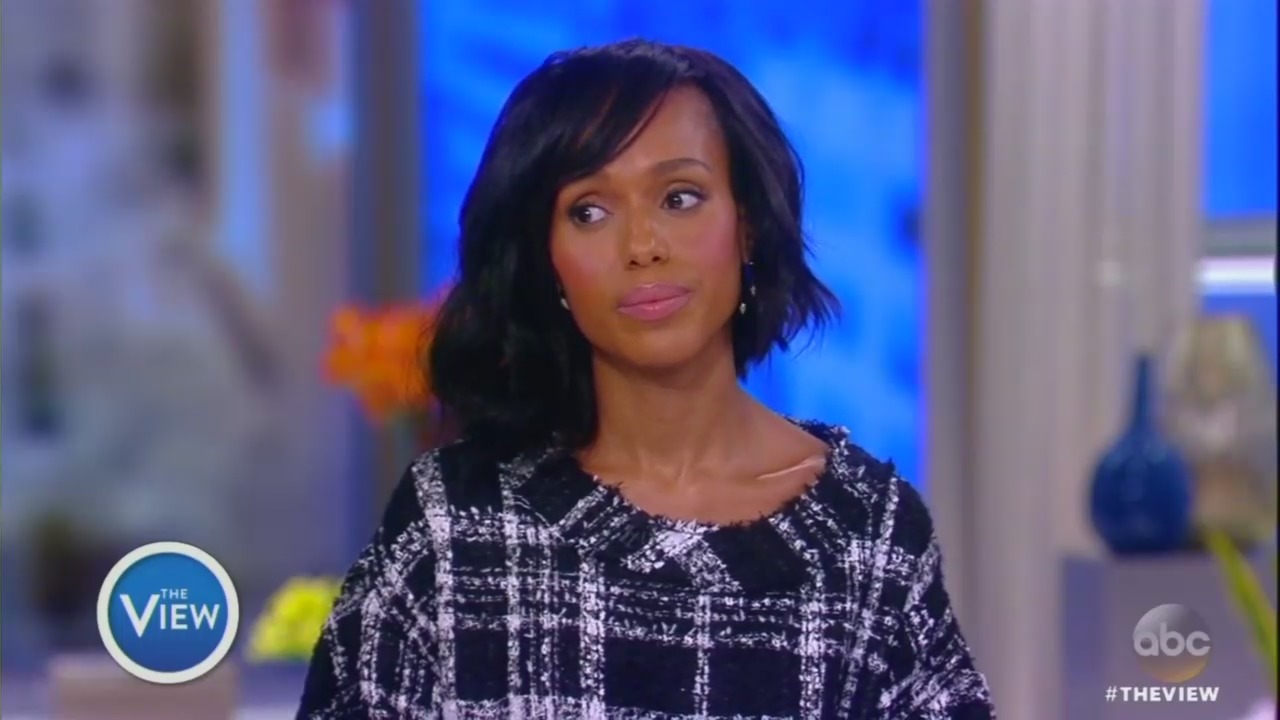 Thursday on ABC’s The View, Scandal actress Kerry Washington appeared briefly to discuss the popular show’s final season. The show’s writers, along with Washington herself, have been outspoken critics of President Trump as well as advocates for abortion and Hillary Clinton. So the hosts were overjoyed with the opportunity to get their like-minded liberal guest to spout off on Trump and Republicans.

But the worst part of the interview came packaged in a question from host Sara Haines, who asked if the “stain of our country” would impact the storylines in the final season of Scandal.

After a warm welcome, host Joy Behar gushed that she was glad to have a politically outspoken liberal like her on the show:

“You know, Kerry, we love when you're here because you're not afraid to talk about hot topics. Some actors are, but not Kerry. We've been talking this week about the whole tragic situation that occurred in--” she began before their guest interrupted.

“We've been talking for almost a year now about this tragic situation,” Washington quipped to audience applause.

Behar got back to her question.

Very specifically not the presidency, but to the gun issue. A lot of people are saying -- Republicans are saying mostly it's not the time to talk about it. What do you think about that?

Washington urged that the “only time” to talk about gun control was “as soon as possible” because Americans were dying every day from gun violence. She went on to blast Republicans for saying we shouldn’t “politicize” death:

KERRY WASHINGTON: And also, I know there are a lot of people that say we shouldn't politicize death. For me, God forbid if anything happened to me, I’m telling all you ladies I want you to politicize it forever. Go ahead and politicize it.

WASHINGTON: It's a horrible thing to say.

After more talk about the surprise of the election and how important it was for 18-year-olds to be politically active, host Sara Haines tried to connect more directly Washington’s show Scandal with current politics:

“When the first show started, the political story line seemed a little crazy. Now not as much,” Haines began.

“Do you think the stain of our country will have an impact on the storyline for this last season?” she asked.

“We're not a ripped from the headline show. That’s not really how we do things,” Washington answered, before acknowledging how “meaningful” it was to write in a female president into the storyline.

“But it does, I mean it's very meaningful that in Scandal, in the world of Scandal, we have the first female President of the United States,” she gushed, to audience applause and grins from the panel.

“I feel like that's an escape, a world that a lot of people want to escape to. It's a privilege. It's a world we're privileged to live in on our show,” Washington added.

“Too bad we couldn't live it in reality,” Joy Behar bemoaned.