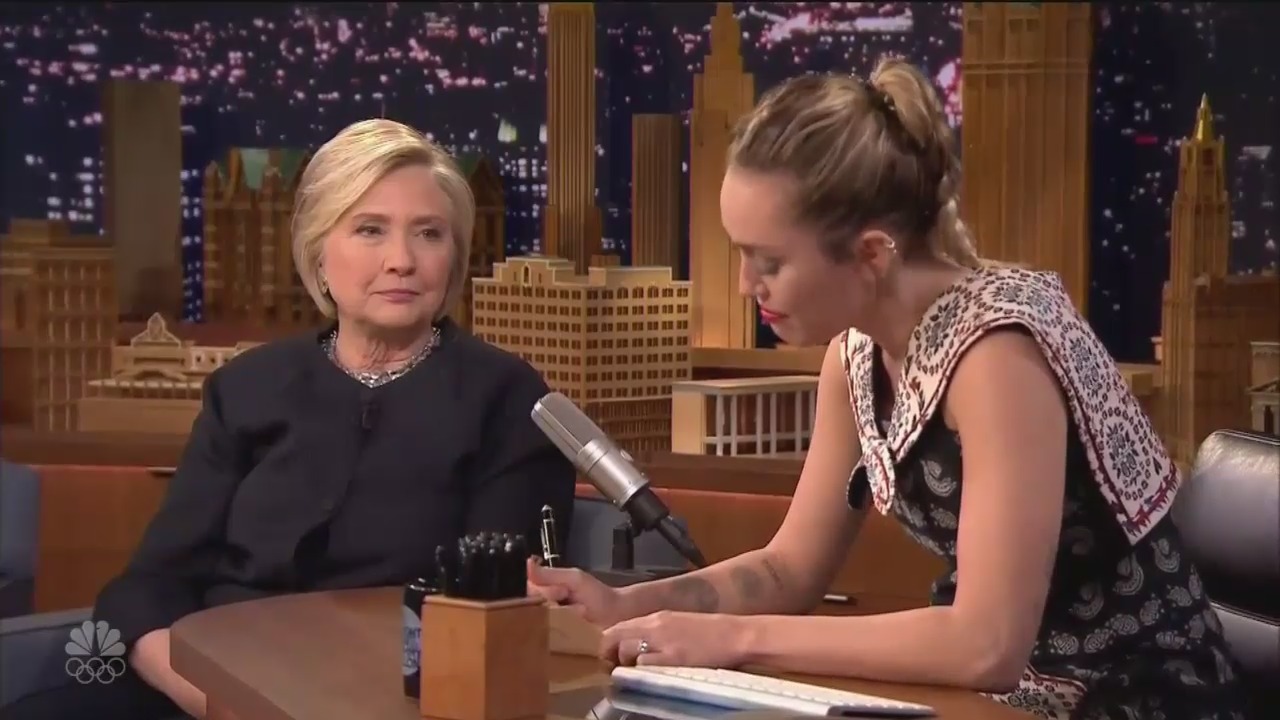 Failed presidential candidate Hillary Clinton is apparently still making media appearances to promote her election memoir, What Happened, that was released nearly a month ago. Wednesday night she was warmly received on NBC’s The Tonight Show, where the host asked her how she would’ve done things differently as President, and devoted an emotional “thank you notes” segment solely to Clinton, with a special appearance by singer Miley Cyrus, gushing over how “poised” “gracious” and accomplished Clinton was.

As every interview with Clinton has started since the election, host Jimmy Fallon began by asking her about what it was like for her on election night. She admitted she was “devastated,” “not just because I thought I was going to win” but also because “I was so worried about what it meant to have my opponent win.” Fallon invited even more Trump-bashing, asking:

“Do you think, like, if you were up against a different Republican, would you have felt different?”

Clinton typically only agrees to do friendly interviews where the questions are pre-screened in advance, so this interview was no different. Yet the scripted questions and answers were so obviously rehearsed this time that it made the preening interview even more obnoxious than usual:

CLINTON: I would have. Yeah, I thought about that a lot. You know, look, if I had lost to another Republican, somebody who I disagreed with, but who I thought was temperamentally capable of being president, who would take the job, and the awesome responsibility seriously, of course I'd be disappointed, but I wouldn't be so worried about my country, and the world as I am now when I see what's going on every single day.

The talk show host agreed, admitting he was in disbelief over Trump being president:

“And every single day, it really is a new thing where you go, I can't believe this is happening now,” he said, before asking:

“Are you kind of, you know, going, I would -- I would do this differently?”

During the first half of the interview, Clinton also blasted Republicans for being “sold” to the gun lobby, and spread a debunked lie the liberal media have been eager to promote in the wake of the Las Vegas shooting, that President Trump had signed a law in January that would allow severely mentally ill people to bypass background checks and purchase guns:

I can’t believe that one whole political party in the greatest country on Earth is totally sold to the gun lobby and will do whatever they are ordered to do, despite the loss of life,” she said. “One of the first things that Trump signed as president was to reverse President Obama’s order that people with serious mental health problems should not be able to buy guns.

“And so he signed it, and aren’t you happy that people we already know who have mental health problems can now buy guns?” she asked provocatively.

After Clinton had got all her talking points out, Fallon went to a commercial break and came back with Clinton to do a particularly nauseating “Thank you notes” segment.

This regular segment is typically all for laughs on a variety of subjects. But Fallon decided to make this segment more like a love letters segment solely to Hillary Clinton. The talk show host brought out The Tonight Show’s female writers to express their thanks to the amazing Clinton, one-by-one:

JASMINE: Thank you, Hillary Clinton, for handling this difficult transition with more grace than I ever could have imagined. That being said, call me day or night and I will be there with a gallon of ice cream and two spoons to tell you, "Girl, you are so much better than him." [ Laughter ] [ Cheers and applause ]

JO: Thank you, Hillary, for all the work you've done for public health care. Ever since the election, I've really depended on my government-subsidized anti-anxiety medication. [ Laughter ] [ Cheers and applause ]

MARINA: Thank you, Hillary, for remaining strong and showing poise before, during, and especially after the election. You taught me that when dealing with a difficult defeat, it's okay to take time to reflect, set your focus on a new path forward, and maybe find a cave in the woods to scream into.

CAROLINE: Thank you, Hillary, for always sticking to the issues, even as people criticized you for superficial things like your hair, your wardrobe, and your appearance. You showed girls everywhere that politics isn't a popularity contest, because if it were, you would have won by about 3 million votes. [ Laughter ] [ Cheers and applause ]

BECKY: Thank you, Hillary Clinton. I was with her. I'm still with her. And right now, I literally am with her. [ Laughter ] [ Cheers and applause ] Can I take a selfie?

ALBERTINA: Thank you, Hillary Clinton, for being someone I continue to admire and look up to and for standing up to critics who said that a woman couldn't be president because they'd be too emotional, impulsive, and unpredictable. So glad we didn't end up with someone like that. [ Laughter ] [ Cheers and applause ]

After that embarrassing display, Fallon said he had a special guest who also wanted to thank Clinton. Pop star Miley Cyrus then appeared on stage and started writing her thank you note while breaking down crying:

MILEY CYRUS: Thank you, Hil -- thank you, Hillary, for being a constant beacon of strength, hope, and determination for me and millions of other young women. You've been a role model and an inspiration and a voice of reason in uncertain times. I could go on and on, but I'd like to get right to the point. Can I give you a hug?

As Clinton began tearing up, Cyrus gushed, “I’ve been wanting to do that!”

On que, Clinton then asked if she could write a thank you note as well.


HILLARY CLINTON: Thank you, Miley, The Tonight Show writers, and all of the women and young girls out there. You are smart, strong, and deserving of every opportunity. Together, we've made our voices heard, we've done great things, and we've come a long way. But as Miley would say, we can't stop, and we won't stop. [ Cheers and applause ]

This whole sycophantic routine from The Tonight Show isn’t new. At the beginning of 2017, Fallon hosted a goodbye episode of sorts for First Lady Michelle Obama and pulled off a similar stunt. In that show, he had a handful of Obama fans appear on camera to tell a painting of Michelle Obama how much she meant to them. Mid-gush, Obama suddenly appeared from behind a curtain to surprise her fans. Fallon also did a special “thank-you notes” segment to the Obamas in that episode. From my write-up of that sketch:

Later in his “Thank you notes” sketch, Fallon compared the First Lady to another liberal icon: Beyonce.

FALLON: Thank you, Mrs. Obama, for being a strong, smart, independent woman, an activist, a style icon, and a great dancer. Showing us all what it would look like if Beyonce married a much nerdier Jay-Z.

Fallon also repeatedly gushed over how “cool” “accomplished” and “smart” the Obamas were, and admitted he bawled on his wife’s shoulder during their final White House party.


FALLON: [Barack’s] just the best man in the whole wide world. I mean, no way could there be a cooler human being than that guy. And every time Malia lost it -- I lost it.