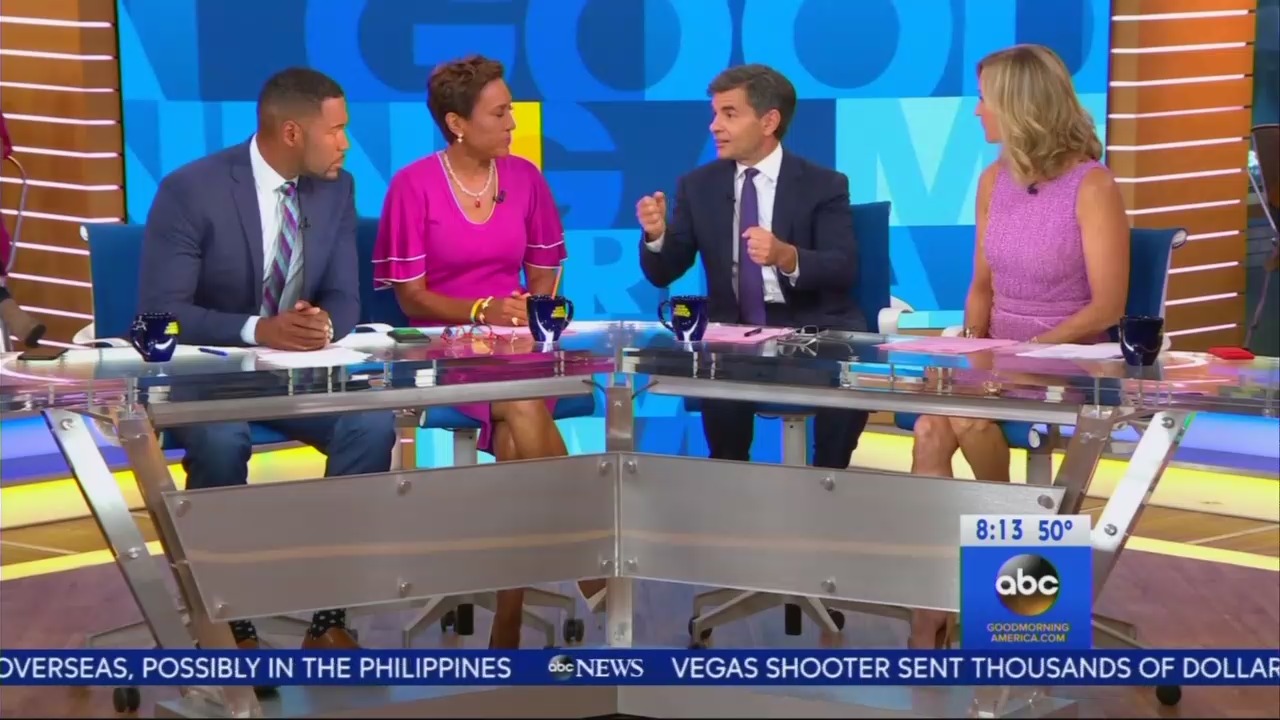 Late night comedy host Jimmy Kimmel opened his show Monday night with a 10-minute-long emotional monologue on the Sunday night massacre in Las Vegas. While the White House called for a day of mourning for the victims of the horrific tragedy, the ABC host called for pointing fingers instead. Kimmel crassly blamed the violence of one lunatic on Trump, millions of responsible gun owners, and Republicans for "not caring" about the country's "gun violence problem."

Even before getting to Kimmel, the GMA hosts set up the gun control narrative in their coverage of the shooting.

“Of course it does immediately raise the question what do we do about it?” he asked. Fellow anchor Robin Roberts then gushed over Kimmel’s “emotional plea” on last night’s show, that “echoed the sentiments of so many.” Roberts praised Kimmel for “taking a big stand on gun control” and “calling out lawmakers” for shushing talk about gun control, Monday.

“After Newtown, after Orlando, after what happened in Las Vegas, when is the right time to discuss it? He brought that up,” Roberts touted.

ABC left out the more partisan parts of Kimmel’s rant in the video clip they played on-air, which blamed Trump and Republicans for the shooting.

Later in the show, ABC did another full report on Kimmel’s comments, touting his new persona has a policy expert as “a whole new side” of the talk show host.

“Overnight, a fiery and passionate plea for gun control from Jimmy Kimmel,” Stephanopoulos gushed. The following report from Linzie Janis was a little more explicit, acknowledging Kimmel called out “the NRA” and “politicians” but still refusing to acknowledge Kimmel’s partisan politics. Stephanopoulos ended the report by explaining one loophole in gun laws. The rest of the panel shook their heads and lamented the “senseless” loopholes in the laws.

But for everything Kimmel said that was completely false, ABC didn’t bother to fact-check even one part of it. Why let the hard truth get in the way of feel-good rants that fly in the face of reality?

NewsBusters’ Nick Fondacaro already broke down everything wrong with Kimmel’s plea for gun control, debunking the skewed facts and outright lies the comedic host helped spread to millions of Americans who may not know any better.

As of Tuesday morning, Kimmel’s politically driven plea had garnered over 1 million views overnight and was number one on YouTube’s trending videos. With the help of the media promoting his propagandizing on their own daytime news shows, it’s no wonder the entertainer is now treated as a policy expert rather than what he actually is, a comedian who is aiding the left-wing media's mission to mislead viewers on this difficult subject.

This biased GMA segment was brought to you by Liberty Mutual, IHop, and OceanSpray.