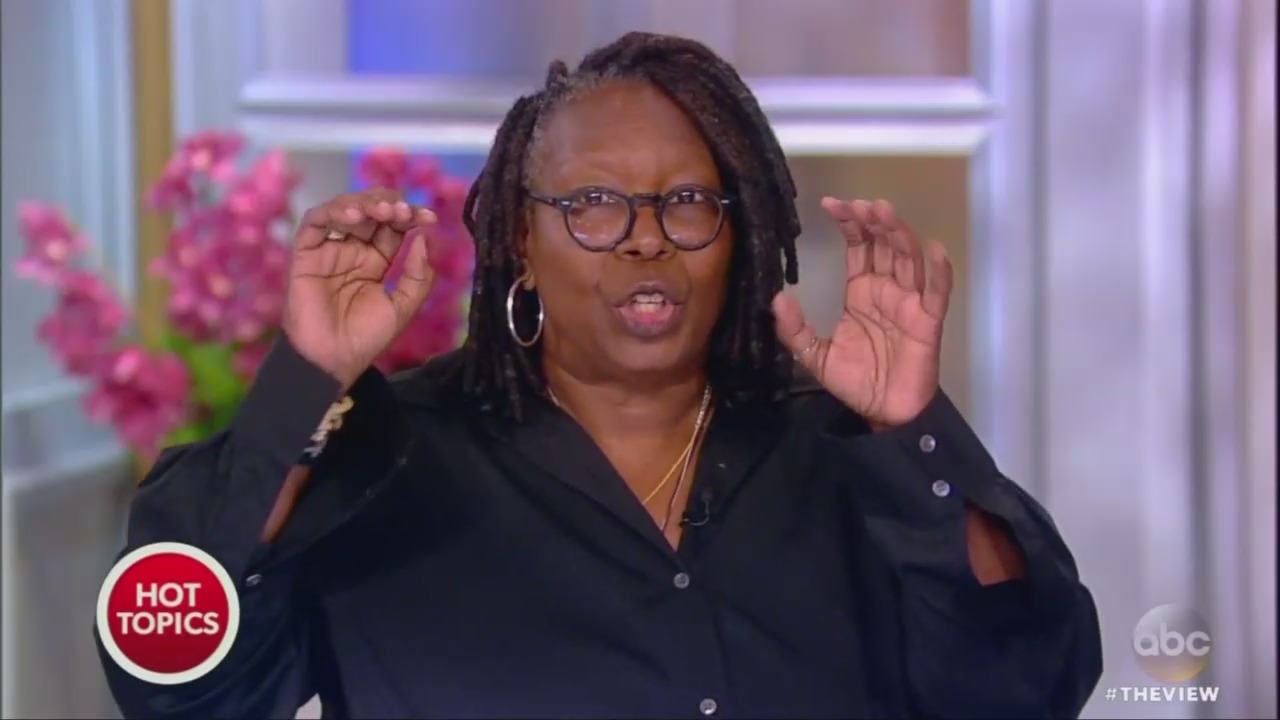 Charlottesville was back on the hot topics table at ABC’s The View, September 15, one month to the day after violence broke out on the campus of the University of Virginia. But instead of thought-provoking conversation on the serious issue, as usual, conspiracy theories about the right was the prevailing opinion expressed at the table by the liberal hosts. Whoopi Goldberg had the most mind-numbing take, actually wondering out loud if the right had “made up” the left-wing group Antifa, so they could have something to “bitch about.”

Not only that, but host Joy Behar even seemed to justify Antifa's violence as a “tactic.”

After discussing President Trump’s response to Charlottesville and whether he “equated” violence on both sides, host Paula Faris was the first one to bring up Antifa’s dedication to violence. But she didn’t even get to make her argument before fellow host Whoopi interrupted to shut her down:

PAULA FARIS: Antifa- it’s anti-fascism. For anybody that thinks this is a nonviolent group they're predicated on violence. In fact, the Department of Homeland Security, according to documents --

WHOOPI: I saw your thing. Let me say this to you. When we look to see what they were talking about, there was nothing there because when you look at the bottom of the list the year that they're talking about is when Obama was in. So we went to see what they had been protesting what fascist stuff Antifa had been protesting. There's nothing there. We can't find anything. This to me-- Antifa is one of those things, I don’t want to say the right, but somebody came up with as a catch phrase so that you could say there's violence on the other side. I don't remember violent demonstrations before the gentleman who’s in now came in.

FARIS: That’s the issue. Can I just say -- because I didn’t get to finish my point--

WHOOPI: I understand I cut you off.

FARIS: It’s alright though. That's fine. According to confidential government documents they were labeled a “domestic terrorist group.” Antifa was. The Department of Homeland Security started warning local and state officials about them back in 2016. When we were at the inauguration covering it for ABC we took a quick break, got a quick bite in DC and Antifa started storming the streets. I was frightened. We had to lock the restaurant we were in because they were knocking people over, they were burning things, they were attacking police, breaking the windows--

Whoopi responded to that by asking Faris when she first heard about the group.

“I actually just started hearing about Antifa a couple months ago,” she replied.

“That's my point,” Whoopi turned to the audience and said.

Host Sunny Hostin agreed with Faris, then passionately argued that the group was nowhere on the level of the KKK.

“I had never heard of it. My understanding is that it doesn't have a leader, it doesn’t have a headquarters, it’s not an organized group. I do not think you can compare this Antifa movement with the KKK. The KKK has been, you know, terrorizing my community for centuries. This equality that there's something on both sides is ridiculous,” she began.

Hostin then scolded Trump as being “complicit” with the KKK, saying that he ran a campaign for “angry white people”:

HOSTIN: I really think if Donald Trump wants to say anything about racism he has to first talk about his being complicit in that. He ran a campaign based on racial resentment and fear. His campaign was for angry white people. He talked about Mexicans being rapists. He talked about a gold star Muslim family. He talked about black people. He talked about -- he has participated in housing discrimination. Anything that he says for me -- needs to start with the birther movement. He needs to admit he's the reason why we're seeing this racial divide in our country.

SARA HAINES: You can't equate or ever should equate the history of a group that is organized like white supremacy like the KKK with this group.The thing I could say---He doesn't say it right. He said there were some very fine people -- marching on both sides. I don't think there's an opposite side of anyone that could argue that they believe they were born better as a race has many virtues left in there. So there’s no equating the two. If he had said something like ‘taking the law into your own hands and violently attacking anyone is never okay.’ He doesn't say that and he tries to equate that they were equal.

FARIS: There's no moral equivalency in there.

After the panel had agreed on that, Whoopi again suggested that this left-wing group was invented by the right to “scare” people, and so they could use them as a punching bag to make a political point:

WHOOPI: You can't do this subtle scare. The subtle scare is what that phrase is. That's why I wanted to see. ‘Cause I’d never heard of this.

HOSTIN: I hadn't either.

Hostin complained that by Trump denouncing Antifa, he was “trying to scare people so they don’t stand up to hate:”

Joy Behar seemed to suggest that violence was okay if it was being used to combat violence.

“That’s why they're using violence tactics--” Behar started to say.

“You can’t support violence and radicalism in your struggle against hate,” Hostin stated.

“But they’re-- Isn't there basic tactic to be equally violent, because they're fighting violence with violence?” Behar asked again.