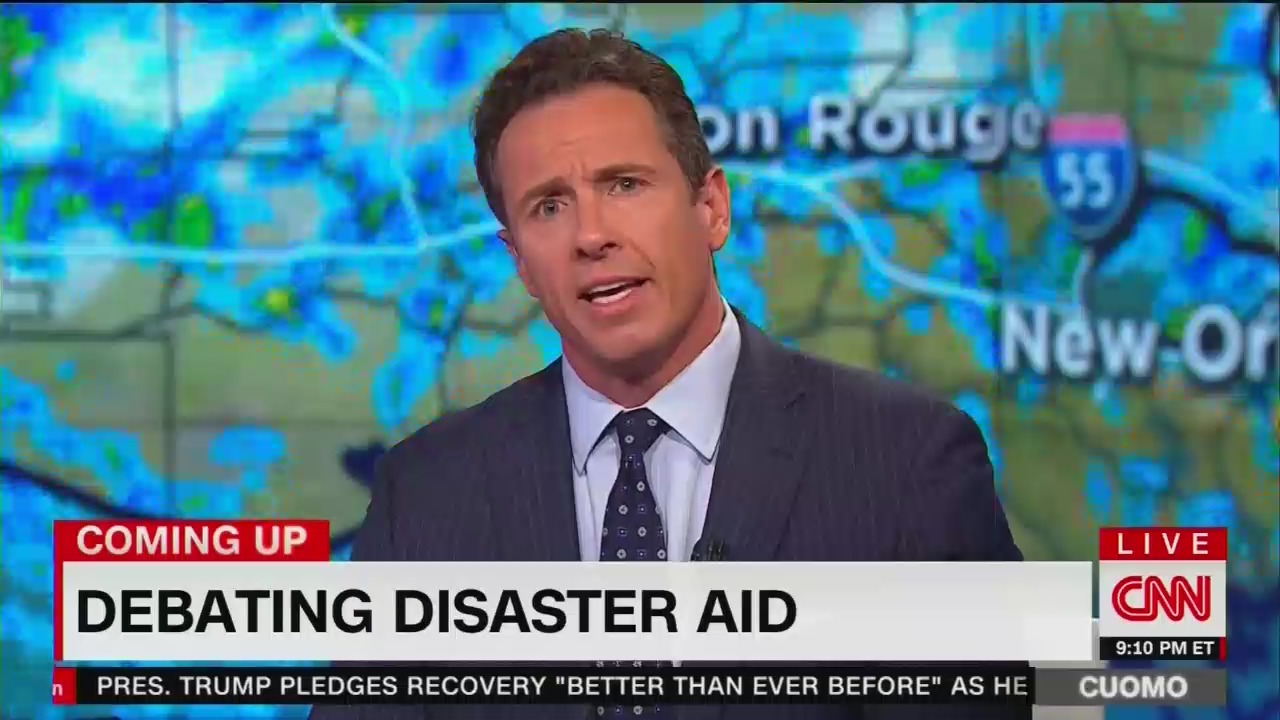 In the midst of the horrific devastation Texans are experiencing due to Hurricane Harvey, CNN New Day host Chris Cuomo can’t stop politicizing the situation. He has spent the entire week badgering Texas Congressmen like Ted Cruz for not voting on a massive, pork-laden relief bill for Hurricane Sandy back in 2013. Ironically, Cuomo’s most often repeated phrase? Republicans “played politics” with Sandy, something it’s reasonable to say Cuomo is now doing himself with Harvey.

Since Monday morning, Cuomo has spent 9 different segments hammering GOP Congressmen over Sandy spending, seeming to take a special interest in bashing Senator Ted Cruz. By contrast, CNN as a network only devoted one interview on Tuesday to badgering a Democrat, Sheila Jackson Lee, for not voting on the Sandy relief bill. And it wasn’t even Chris Cuomo who did the badgering, that time.

Each segment on CNN has been filled with Cuomo making nasty swipes at Republicans, suggesting they were self-serving and even lying about Sandy relief funding. Cuomo’s perseverance at perpetuating this “cold-hearted GOP” narrative was so obnoxious, it deserved a video roundup. Watch the video below to see all the times Cuomo went out of his way to “call out” Republicans and conservatives for not wanting to impose a massive spending bill, filled with pet projects and special interests on taxpayers.

Cuomo doesn’t seriously address Republicans’ concerns about the Sandy relief bill. Instead he just shoots down their argument as “false” because Chris Christie and the liberal fact-checkers at the Washington Post said so. According to several conservative think-tanks, the bill was loaded with pork. The Heritage Foundation even estimated that over 60% of the bill’s budget was not directly related to Sandy.

But facts don’t seem to matter to Cuomo, who let slip that even if the bill was filled with pork, Republicans should’ve voted for it anyway. For example, to Republican Representative Roger Williams on Tuesday night’s Cuomo Prime Time, the CNN host justified spending money on a massive bill, because,“[S]ometimes you need to pay and figure it out later.”

Later in that same interview, Cuomo actually acknowledged that the GOP wanted a clean bill, without pork, but said that was unrealistic:

“Asking for a clean bill is a little bit like asking for all the water for Harvey to disappear tomorrow. It doesn’t happen.”