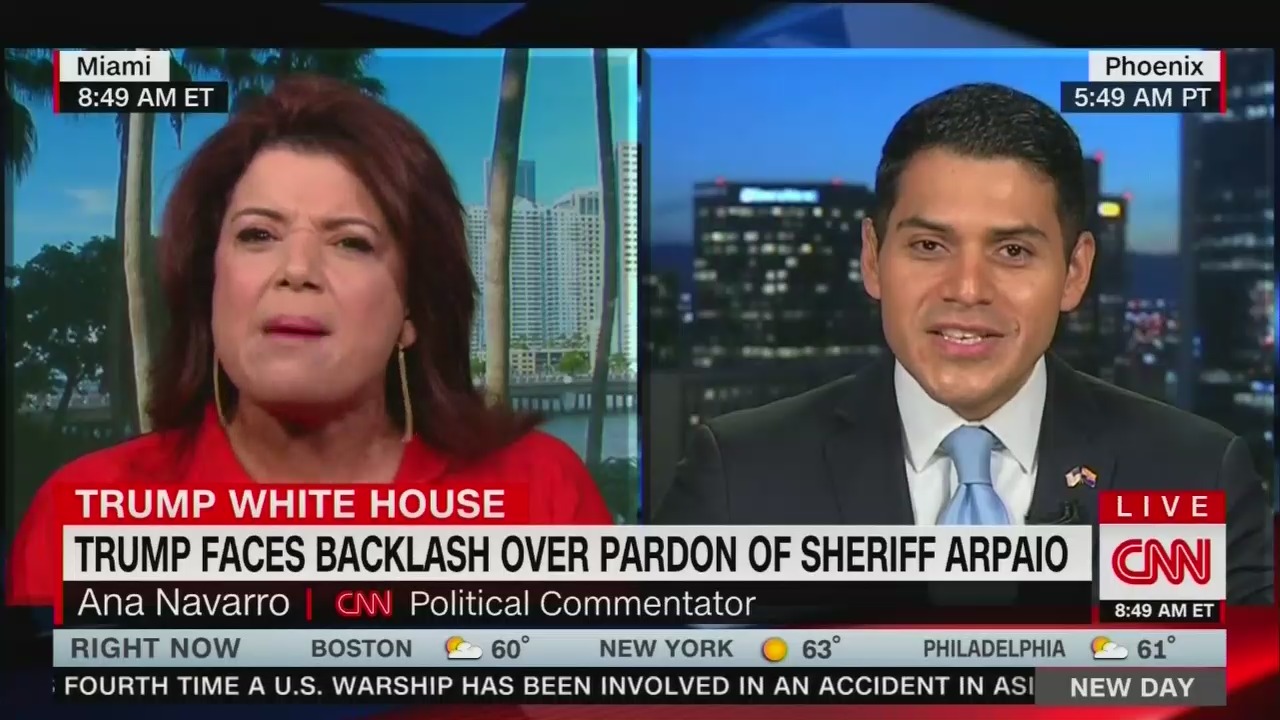 Monday morning’s New Day ended the 8am hour with a fiery back-and-forth exchange between host Chris Cuomo, CNN analyst Ana Navarro and Republican Senator from Arizona, Steve Montenegro, over President Trump’s pardoning of Arizona Sheriff Joe Arpaio this past weekend. The CNN host actually began by suggesting Trump “used” Hurricane Harvey as a “convenient” “cover” for his pardoning of the controversial sheriff. After Montenegro claimed the controversy was created by the media and the left, Navarro angrily ranted she was not part of the left, citing her record of siding with liberal Republicans as some kind of evidence that she was a conservative.

Host Chris Cuomo let perpetually angry analyst Ana Navarro have the first chance to speak out against the pardon. But not before suggesting that President Trump was using Hurricane Harvey as “political cover” for pardoning Arpaio:

“The timing matters, Hurricane Harvey bearing down on the Texas coast, category 4 storm at same time we learn the president is going to pardon Arizona Sheriff Joe Arpaio. Did the president use Harvey for political cover?” Cuomo actually stated with a completely serious face.

“What do you think, Ana? You don't get the Friday pass the way you used to, but do you think the pardon was conveniently timed?” he prodded again.

Well, of course it was conveniently timed! Listen, first of all, that same day, he did the -- he signed the ban on transgenders serving in the military, which is incredibly offensive, that a guy that has been a continuous draft dodger would ban patriotic, qualified Americans willing to risk their lives from serving, something he wasn't willing to do, something I wasn't willing to do, just because of their sexual identity. That is offensive. He does that early in the afternoon.

Then he does the Arpaio pardon and then we learn that Gorka left the White House. Of course -- or was ushered out of the White House. That's not coincidence. That's him throwing a bone to his base first before announcing something that he knew his base would not like. And, of course, using the context of the hurricane to distract us all, as one of his deputy homeland advisers said yesterday on ABC. Nobody's paying attention to Arpaio because there's a hurricane that we are living through. Well, he is damn wrong. There are a lot of people in this country, not only Latinos, who are incredibly offended of a pardoning of a man who is a racial profiler and a discriminatory racist.

Cuomo then introduced his other guest, Sen. Montenegro, as a “Latino who is not offended by the pardon.” Montenegro attacked the left’s “blatant outrage and hypocrisy” over Arpaio, bringing up how they were not outraged after President Obama pardoned criminals and terrorists, like Oscar Lopez Rivera and Bradley Manning.

“Where was the outrage there?” he asked.

Montenegro argued there was a “complete bias” in how this case was handled in the judicial system, saying that the Obama Administration made it so Arpaio couldn’t have a jury trial.

“I'm confident that if this would have gone to appeal, he would have won this on appeal. But, again, the hypocrisy of the left --and then they scream racism. That's all the liberal and all the left has when it comes to running out of facts,” he stated.

Cuomo defended the left, saying no one “injected” racism into the case but Arpaio himself. Montenegro started to argue that this was the media’s false characterization, before Navarro went on her own rant against what Montenegro said. She even went through a laundry list of liberal and moderate, establishment Republicans as evidence that she was in company of fellow “conservatives:”

ANA NAVARRO: Listen, those are nice talking points about the left. But I am not the left. I have been a Republican since I came to this country, fleeing Communism when I was 8 years old and Ronald Reagan was president. John McCain, who has spoken strongly against the Arpaio pardon, is not the left. He is a national hero and was the Republican nominee. Your other Senator, Jeff Flake, also a Republican from Arizona. People who know the facts and have been on the ground are not the left. Paul Ryan, the speaker of the house, who came out and spoke against this pardoning of Arpaio, is not the left. Congresswoman Ileana Ros-Lehtinen from Miami, first Latina Republican elected to congress in decades, is not the left. This thing about the left and what about-isms, they're a very nice crutch for you to use. And you're entitled to use it.

Let me say this to you. There will be a lot of Latinos watching you and listening to you today who are going to say you're a self loathing Latino who doesn't look at himself in the mirror. I'm going to tell them to stop. Maturity of a community means we can have diversity of opinion. That's your opinion. I differ from it. I'm not going to call you out on that way.

MONTENEGRO: Let me answer to that, please.

NAVARRO: There are a lot of Republicans who have spoken out against it.

MONTENEGRO: But Chris I want to answer to this. This directly went to what I am trying to say. So let me respond to this. Ana, anybody can say that they're a Republican. Granted, you are a Republican but you're also a liberal. And you can't run away from that. The reality is that you voted for Hillary Clinton. So let's be honest about what we're talking about here. We're talking about a narrative that tries to pin conservatives and Republicans as racists.

Not liking the attention to be on the media, Cuomo tried to interrupt again, but an angry Navarro spoke louder, yelling at Montenegro that all her classically left positions somehow made her “conservative:”

The conversation went further off the rails as Cuomo and Navarro paired off against Montenegro.

MONTENEGRO: If you want to lean on the Hispanic community --

NAVARRO: I don't lean on it. I’m a Hispanic!

CUOMO: Hold on one second. Jobs matter to every community. Raising wages would be a panacea for many problems in this country. We're waiting to see how the president makes that happen. That's one issue. You have said nothing about the sum and substance of what got Arpaio in trouble. Do you think it's okay to look at someone like you and say, hmm, you look like you might be Latino. I'm going to check and see if you're an illegal immigrant or not. Are you ok with that practice?

“Every story needs a villain. In this case, the media has made a villain--” Montenegro started to say before Cuomo interrupted to demand, “Talk about the practice!”

“Let me finish,” Montenegro responded, before explaining how the left’s characterization of Arpaio as having racist beliefs didn’t add up.

“The reality is that you have an 85-year-old man, 33% of his employees were Hispanics. Out of five of his top deputies, three of them were Hispanic. He has a grandchild that's Hispanic and another grandchild. This whole nonsense about racism is something that the left that liberals use --

“ Then what was the practice about?” Cuomo demanded again.

“-- That can't respect the rule of law,” Montenegro finished.

But Cuomo wouldn’t be distracted from his talking point.

“If you look like an illegal I'm going to check you for I.D.! Does that sound good to you?” he ranted.

“Do you see what I'm saying? When liberals are out of talking points, when they are out of facts --” Montenegro argued again before Cuomo cut him off.

“Defend the practice! You're not speaking to the practice. You haven't said a damn thing about the practice! The facts that are on the record. Address them!” Cuomo yelled at Montenegro.

CUOMO: That's a fine political argument. Hold on. Ana, we have to leave it here. I'll state the proposition to the audience just so they can measure what they've seen. Either you think it's okay to look at somebody and say you look like you may be an undocumented person, I think I’ll check you--

MONTENEGRO: That's not the case.

CUOMO: Those were the facts of the accusation.

MONTENEGRO: Those are accusations.

CUOMO: That's how he got thrown into contempt of court.

MONTENEGRO: Chris, those were never correct-- they were accusations made by liberals.

CUOMO: They were made by the justice system.

MONTENEGRO: Made by the media.

NAVARRO: Such a broken record.

MONTENEGRO: We have a very political justice system.

CUOMO: Fine. But it was the justice system.

NAVARRO: You are a broken record. [ Speaking Spanish]

MONTENEGRO: Thank you for having me on.