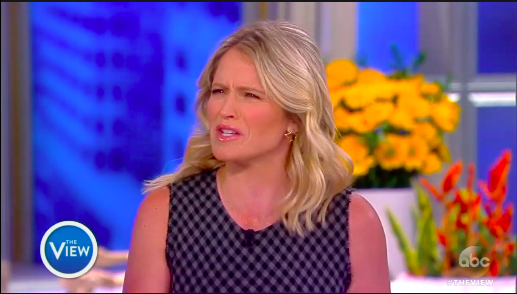 Wednesday on The View, the panel opened the conversation with shock and dismay at news that the Justice Department was investigating universities’ affirmative action policies and if they were unfair to white students. The table decried the already “unfair playing field” repeatedly, even bringing up slavery as a reason why we still need affirmative action to this day.

“No. There was a systemic racism that remains in this country and if we want to catch up from decades of people starting in a staggered way and not playing on a fair ground you have to do this to allow diversity,” she gushed. She added that she was “disturbed” that the Justice Department was using funds from the civil rights division to undergo the investigation.

“Well it’s like a double slap in the face!” Haines remarked.

After hosts Whoopi Goldberg and Hostin justified affirmative action based on how things used to be, host Jedediah Bila asked them if in “today’s world” it still was needed. Hostin asked Bila with a smirk: “Do you really think that the playing field is even?”

“Are we at this evil [sic] playing field? Are we where we want to be as a society and I think the resounding question is no,” Hostin continued.

I was going to say I think we're in a period in history that we have to be very vigilant because there are assaults on all sorts of civil rights going on this Trump administration. For example they attacked sexual assaults on campuses. They don't quite think that's an issue. Transgenders in the military. We heard that last week about how they suddenly want to discriminate against soldiers who are transgender. Access to voting. I mean the voter ID laws. Making old people who don't drive show a picture ID. They don't have a picture ID. Discrimination protections for gay employees. This is something that came out this week. What is happening is there seems to be a systemic eroding of civil rights that we have been working for since World War II.

Not to be out performed as the leading social justice warrior champion at the table, Haines interjected again:

What comes to mind is when we look at our representatives in the government and we say when we look at people that first addressed the health care, oh this was a roomful of white men, until our representation is reflective of our population. We haven't caught up yet. So when you look at women in an executive position, whether it’s any person of color or different things, until we play catch up for what we have done as a nation for centuries, we set them back. Its time to bring people forward.

Whoopi again went back to the historical reasons for affirmative action, with the panel lamenting about women's rights in the 1960s as if this was just yesterday. Hostin then quoted her favorite president:

“I think President Obama said it the best. ‘We're a country that can't guarantee outcomes but we can guarantee an equal shot’ and we need to guarantee that equal shot,” she stated to audience applause.

As if going back nearly 60 years wasn’t far enough, Behar decided to go back centuries to bring up her defense for affirmative action.

“I was going to say this country is based on systemic racism starting with slavery and then Jim Crow. That has to be addressed. It's in the process of being addressed. It's never going to be equal until that is addressed and that's what affirmative action tries to do,” she stated.

After bringing up a poll of about half of white Americans who supported affirmative action in schools, Hostin summed up the table’s sentiments: “The majority of Americans understand that the playing field is not level.”