Michael Moore: We Need MORE Anti-Trump Comedians to ‘Bring Him Down’ 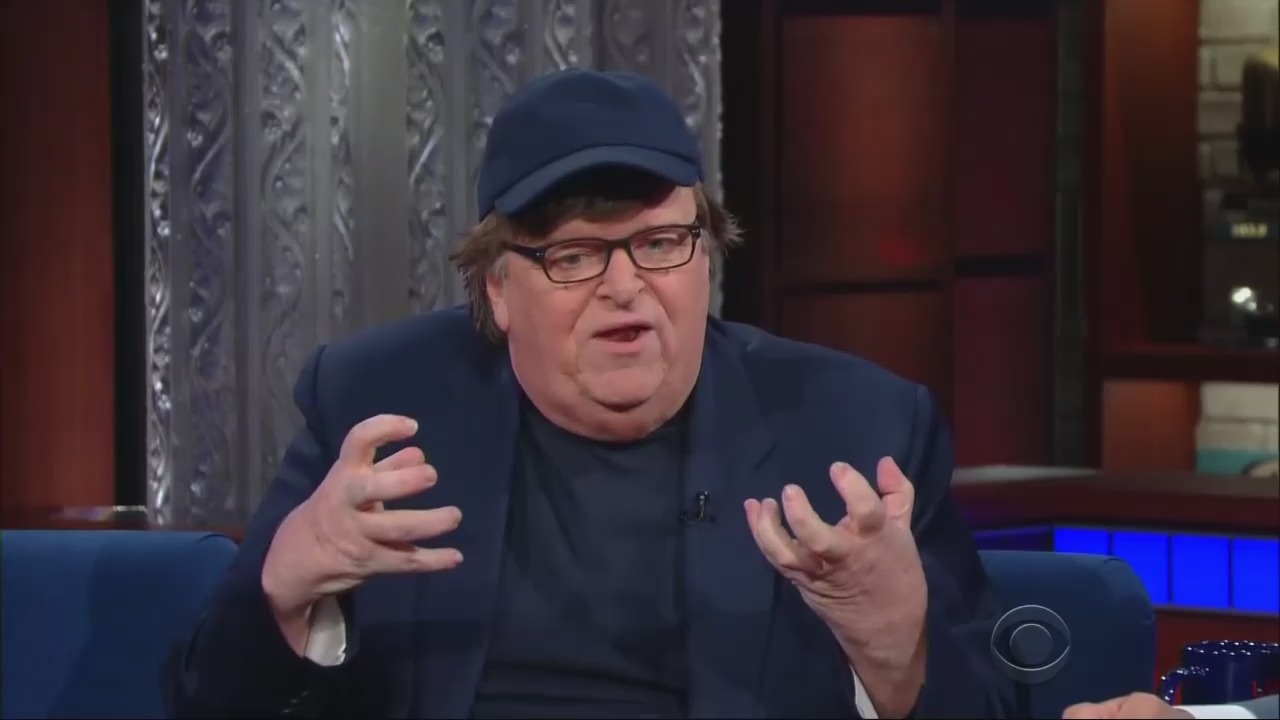 Ultra left-wing activist and filmmaker Michael Moore is so desperate to get President Trump out of office, his absurd ideas of how to accomplish that show just how removed from reality he is. Wednesday night on fellow Trump-hater Stephen Colbert’s The Late Show, Moore complained that he “refused to live” in Trump’s America, so “something’s got to change.” Laying down an ultimatum, Moore commanded that everyone who hates Trump must form an “army of satire” to “bring him down.”

Like two peas in a pod, host Stephen Colbert and Moore spent the entire conversation talking about their mutual disgust for the president. Moore explained he even wrote a Broadway play about Trump entitled, “Michael Moore on Broadway: The Terms of My Surrender.” Colbert asked if this meant Moore was “giving up” being part of the “resistance.”

"So is this you giving up? Are you-- are you waving the white flag and saying this is how the world is now?" he asked his guest.

Moore scoffed that he wasn’t leaving America, but at the same time, he “refused” to live in this country while Trump was president.

Colbert suggested voters vote Trump out, come next election. That wasn’t good enough for the hyperbolic Moore, who worried what the country would look like at the end of Trump’s potential second term:

COLBERT: Vote. You-- three and a half more years.

COLBERT: Do you think he makes it another three and a half years.

MOORE: Oh, I, I actually-- I live with the attitude-- and I'm sorry to-- I don't mean to go dark on you here. But just think of-- you all know your age right now. How old are you going to be in 2025? The possibility exists that Donald Trump will be your, our president in the year 2025 at that age that you're at. Right. We don't want to think that. But we were also a year ago sitting here-- not myself but other people, you know, "There's no way he's going to win. There's no way. Hillary's got this in the bag." They were already popping the champagne corks and celebrating.

Since that possibility was out of the question for Moore, he demanded citizens form “an army” like “a swarm of bees” and keep “coming at Trump” with their attacks. But he reiterated, he didn’t mean physical violence. So what was Moore’s brilliant plan exactly? Create an “army” of anti-Trump satirists to “bring him down,”(because what America really needs right now is more anti-Trump comedians.)

MOORE: We have to form an army of citizens and come at him like a swarm of bees where's it's just-- he's getting hit one way, all the way. ( Applause )

And, frankly, I suggested a few months ago that we have an army of satire, because I think the way to bring him down is with satire. His thin skin, as you pointed out so well, is so thin, all we need is 1,000 or a million little comedy shivs. Just--- nonviolent, don't hurt him, but just under his skin because he can't take being laughed at.

COLBERT: You’ve got to go do your material on Fox & Friends. That's all he watches.

[A]nd I'll tell you and the army of satire, we already have given our first medal of honor to Melissa McCarthy, because she's taken down the first Trump administration official with satire. ( applause ).