Networks Cheer On ‘Fired Up’ Clinton, ‘Back in the Spotlight' 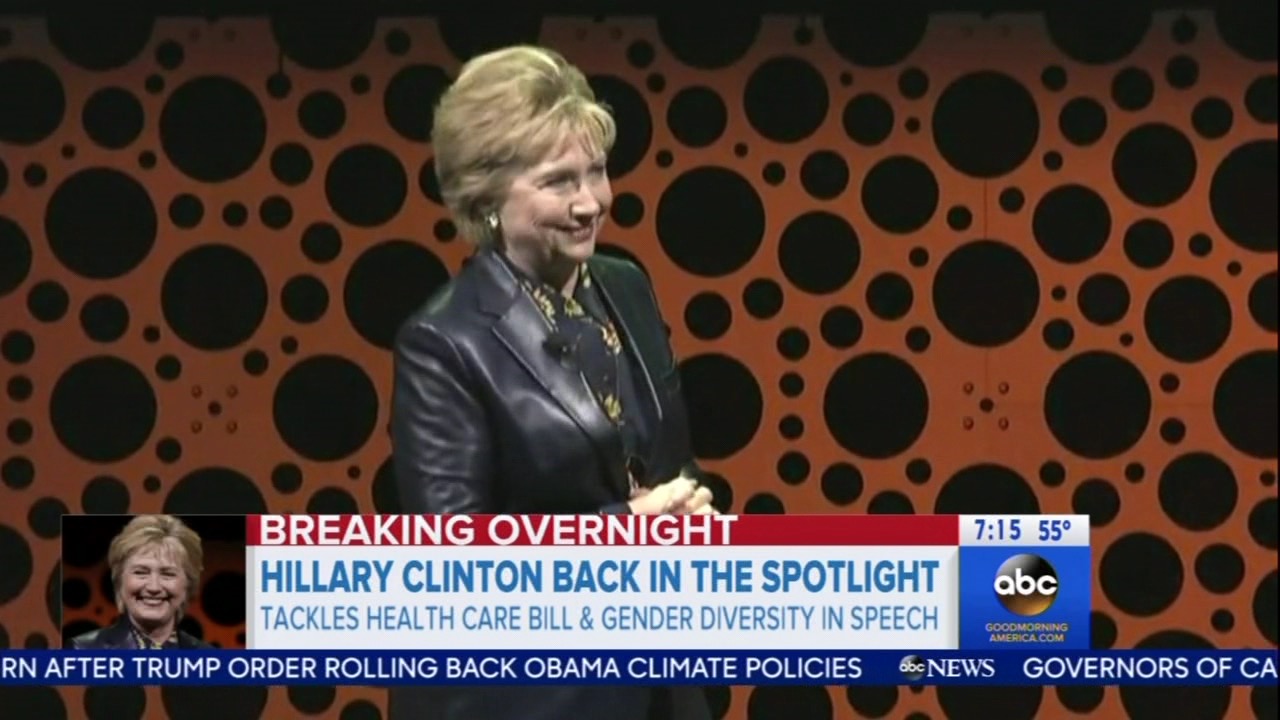 She may have lost the election but that doesn’t mean the media doesn’t still hang on her every word. After Hillary Clinton made a surprise appearance before an audience in San Francisco attending a diversity conference Tuesday night, the networks couldn’t get enough. ABC, NBC and CBS all devoted time to Clinton’s speech March 29, playing several clips where she bashed the White House for its handling of health care, diversity and other issues.

ABC’s Good Morning America offered the most excited coverage, Wednesday morning. Anchor Robin Roberts opened the report hyping Clinton was “back in the spotlight” in a “rare public appearance” last night. White House correspondent Cecilia Vega followed up, gushing that Clinton came out “swinging” with some “tough talk” for her old opponent.

Playing several video clips of Clinton’s speech, Vega noted she was “not holding back, cheering the failure of the Republican health care bill.” ABC covered every one of Clinton’s liberal talking points, from the health care bill, to a lack of women in Trump’s cabinet, to “calling out” Spicer as “patronizing” for his response to reporter April Ryan.

ABC ended its report excitedly wondering aloud if this meant that Clinton would be coming back to politics. Vega reported that she asked an aide to Clinton, but only heard back that Clinton was a woman who wasn’t “going to stand by and watch other women be bullied, insulted and demeaned.”

"I will leave it to you guys to read those tea leaves," Vega added.

Over on NBC’s Today, a full report and news brief highlighted Clinton’s speech. Anchor Matt Lauer introduced the first report, excitedly noting a "fired up" Clinton was “breaking her silence” and “taking on the new White House.”

Reporter Peter Alexander followed up with clips of Clinton “slamming” Trump in a “politically-charged speech,” on health care and defending April Ryan.  Alexander showcased Clinton “sharing her mantra” of “Resist, insist, persist, enlist,” to the crowd, with a standing ovation.

CBS’ This Morning was the least biased of the three, offering just under a minute of coverage that was straightforward in tone. Anchor Gayle King noted Clinton speaking out against the Republican health care bill, before CBS played a short video clip. The other moments touted by ABC and NBC were not shown or mentioned by CBS.