Mark Levin: 'Schizophrenic' 'Confused' Media 'Can't Even Get Their Stories Straight' On Wiretapping 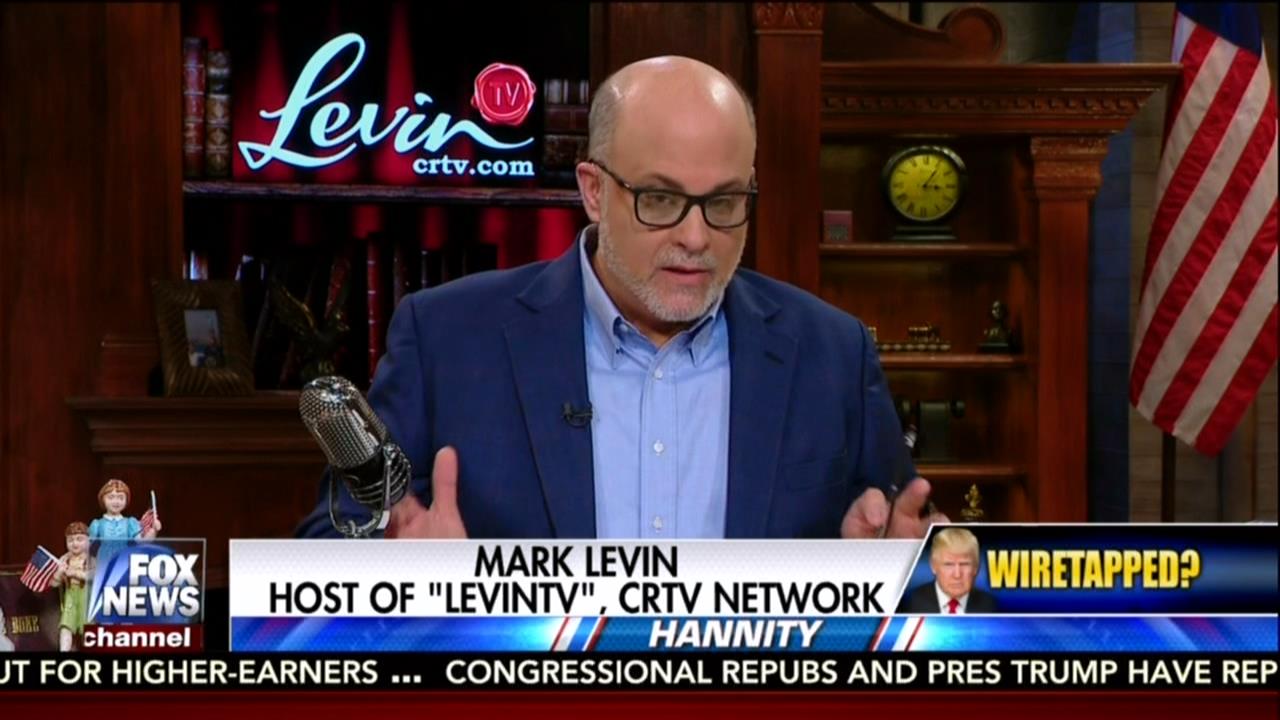 Monday evening conservative radio host Mark Levin shot back at the media, after several networks and pundits mocked him as a “conspiracy theorist” who propagated stories from anonymous sources. This came after Levin talked about reports that the Obama Administration had eavesdropped on Trump's associates before the election, reports Levin asserted, he got from the mainstream media itself. “Apparently now I have forced the media to do its job!” Levin snarked before accusing the media of being “schizophrenic” for forgetting their own reporting.

On his radio show Monday evening, Levin accused the media of being unable to get their stories straight.

“The headline should be, the lies and deception of the media, for weeks,” Levin charged.

“The media are worse than schizophrenic. They are ideologically driven. They can’t even get their stories straight,” he added.

Defending himself against ABC’s reports that he was a “conspiracy theorist,” Levin scoffed, “No evidence to show? All I did was read the news reports!”

Levin also laid into former DNI James Clapper for telling NBC’s Chuck Todd on Sunday’s Meet the Press that there was no FISA court order pertaining to wiretapping any member of the Trump campaign.

“For weeks, the media have reported there are FISA court orders!” Levin exclaimed.

LEVIN: For weeks, the media either promoted it, or let it sit. For weeks, the media, obviously wanted you to believe that...so serious are the connections between Donald Trump and his people...so deep are these connections that they were able to reach the probable cause standard and get a warrant under FISA in October to launch wiretaps, I guess. Electronic eavesdropping.

“So apparently now, I have forced the media to do its job! Tell me Chuck Todd, why didn’t you do this interview a month ago?” Levin asked, before laying into CNN.

LEVIN: Tell me Jake Tapper, another fraud and I’ll get to you in a minute, why didn’t you do this interview a month ago? Tell me Brian Stelter, if you really are accusing me of not having evidence, of anonymous sources, of news organizations on FISA court applications and so forth, why didn’t you raise that weeks ago?

The radio host also reiterated his point by publishing on his website, a long list of other outlets which have reported the wiretapping story before he brought it up on his program.

Later Monday night, Levin laid out these same points on Fox New’s Hannity. Host Sean Hannity began by noting that this wasn’t a “right-wing conspiracy” because Levin had only repeated reports he had read weeks ago from the mainstream liberal media.

"Yet it is only conservatives who are concerned about what they are reading in liberal media outlets. Have you noticed that?” Levin remarked.

HANNITY: I am laying out the basics here. You put together in a very comprehensive way -- this is not the right-wing conspiracy, this is not the conservative Sean Hannity, Mark Levin. This is the New York Times. This is McClatchy. Explain.

LEVIN: Yet it is only conservatives who are concerned about what they are reading in liberal media outlets. Have you noticed that? The media is very confounded right now, they are very confused. They do not know whether to trust themselves, trash their colleagues, or what.

Levin then cited a New York Times article published Jan.19 of this year.

“I just want to make sure CNN and MSNBC are aware of this,” Levin snarked, before reading the headline and points from the Times article corroborating what he has been saying on his radio show.

LEVIN: The reason I got fed up with this last week is I am a constitutional conservative. I look at this, if I'm reading these news reports, we have of runaway executive branch. I do not know who knows what and as of today, the media do not appear to know who knows what which is exactly why I've been calling for congressional investigations. The question is, why aren't CNN, CBS, NBC, MSNBC and all the rest of them, why are they not concerned about this? Rather than mock the president and his tweet, pay attention to what your own reporters and other reporters are saying.