CNN: Trump Gets Info From ‘Propaganda’ ‘Not Legitimate’ Sources Like CNN, NYT 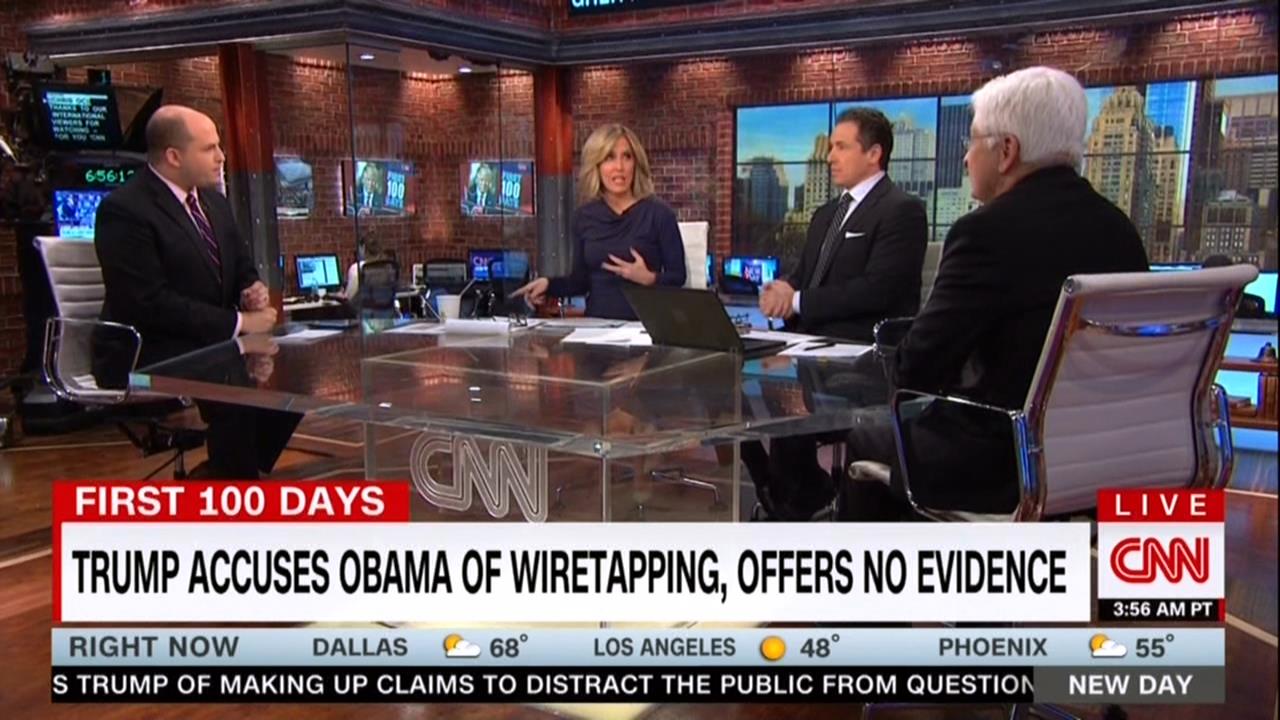 Monday morning on CNN’s New Day, hosts Chris Cuomo and Alisyn Camerota spoke with media correspondent Brian Stelter and analyst Bill Carter about Trump’s claims that he was wire-tapped by President Obama. The CNN panel took the opportunity to not just bash Trump but also blast the “illegitimate” and “partisan” right-wing sources where Trump gets his news.

CNN painted with a broad brush, lumping in talk radio  and several right-wing websites as illegitimate propaganda, simply because they weren’t “CNN or the New York Times.”

The roundtable began with Cuomo asking Stelter about where Trump gets his information. “That’s the real story here,” Cuomo began. “The origin story,” Stelter added, before blaming radio host Mark Levin for “kickstarting” this wire-tapping story:

STELTER: This is a story line popular in conservative media circles, about Obama undermining Trump. Mark Levin on his radio show on Thursday really kick started this, suggesting there’s a silent coup underway, cherry picking news stories to make his point. Then Rush Limbaugh picked it up on Friday. Breitbart picked it up on Friday. That Breitbart article circulated in the West Wing and according to our own Jeff Zeleny, it infuriated President Trump.

ALISYN CAMEROTA: But look at the sources Bill, where he gets his information. We have a graphic. Info Wars. They peddled the pizzagate dangerous conspiracy theory. Newsmax. Heat Street, the genesis for this one. These are not reputable, award-winning solid sources.

Carter, a former entertainment writer for the New York Times, jumped into attack right wing sites as “propaganda” and “not legitimate” sources of information.

If you will remember back in November, a New Day panel peddled Newsbusters as a “fake news” website:

BILL CARTER: It’s more than that. They're propaganda sources. They're not legitimate news sources or information sources, they have partisan points of view. They are propaganda. He is listening to propaganda and making a decision that is really reprehensible and reckless to take on the former president based on this kind of information. And he could, as you pointed out, he could find the truth and he didn't bother with that. He went only with this point of view.

Cuomo agreed, asserting that Trump didn’t care about “the truth.”

CUOMO: Lead to your own conclusion. It's not about the truth for the president.

Stelter did push back a little bit on Carter’s point that all right-wing news was propaganda, saying that he believed “good reporting” could come “from anywhere,” but that Trump right now was relying on “cherry-picked” information. Stelter piggybacked on Camerota’s point earlier of Trump ignoring “legitimate” sources, like “CNN and New York Times.”

STELTER: I spoke with Mark Levin over the weekend. He said the public record is damning for the Obama administration. We need to get to the bottom of this, about the Obama administration. I think this is effective among Trump’s loyalists. You look at these websites-- you were saying they're propaganda. I would say good reporting can come from anywhere. But right now what’s happening is, the Levins, the Breitbarts, they're cherry-picking convenient information and they’re leaving out the inconvenient information but for example, the CNN and New York Times and other outlets haven't been able to confirm the existence of these FISA warrants.