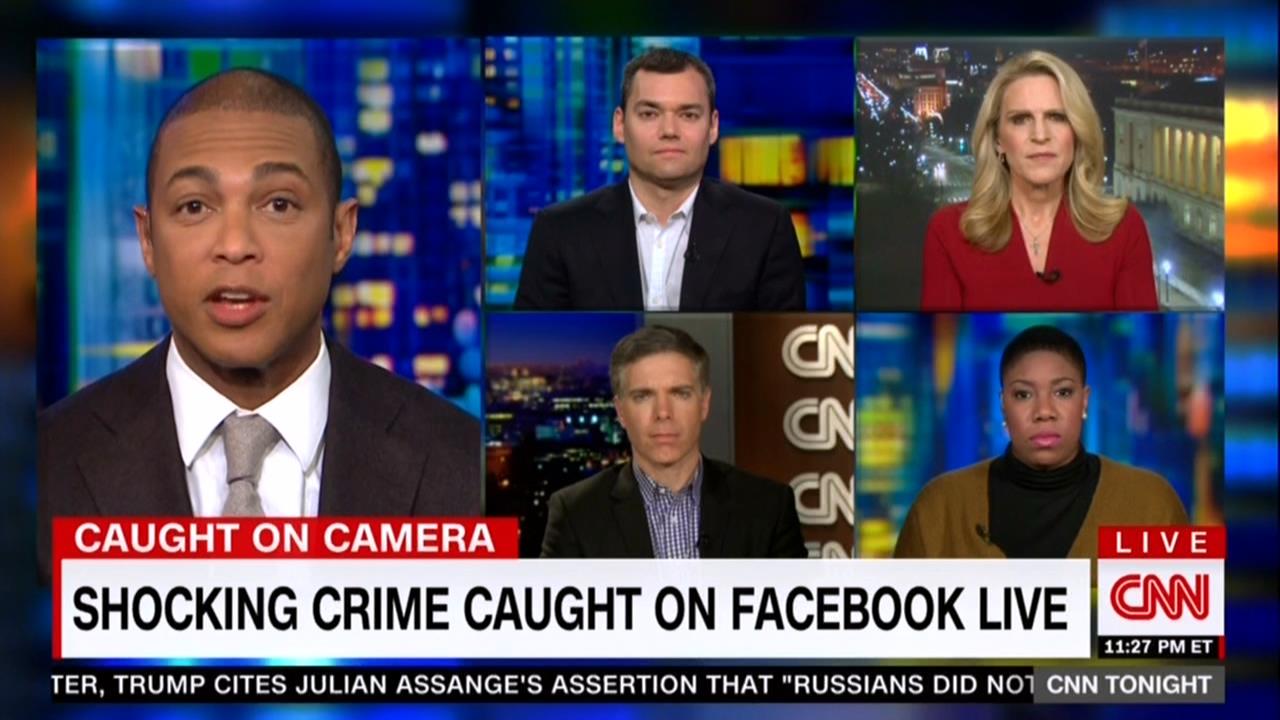 After a horrific Facebook Live video yesterday showed four black youths torturing a young white disabled man while shouting anti-white and anti-Trump epithets, the media have been slow to report on the story at all. ABC and NBC ignored the story on Wednesday’s evening news broadcasts while CBS simply gave a pithy few lines to it. CNN Tonight did report on the story Wednesday night, but repeatedly cast doubt on the idea that this was a politically and racially motivated hate crime.

The segment began with host Don Lemon speaking to legal analyst Jeffrey Toobin. From the start, the two struggled to classify this as a hate crime, taking a hands off approach. Toobin called the event “evil” while Lemon discounted it as simply “just dumb, stupid behavior.”

He then reiterated that the case wasn’t settled, questioning if this was really a hate crime:

DON LEMON: Just dumb, stupid, behavior here that's obviously -- I don't know, no home training because no one I know who was raised by any parent would even dream of doing something like that. My mom would probably beat me worse than that kid. We've been talking to the police, police say they’re still investigating.They won't classify it as a hate crime. Is this a hate crime?

TOOBIN: Well, I don't know. And I don't want to prejudge too much because you know, frankly even the video has so many bleeps that um, you would need to hear what he said because racial epithets perhaps might have been bleeped and that's something that would be relevant. I’m not sure everyone knows but racial motivation can be black versus white, white versus black. So it is certainly possibly a hate crime.

Lemon pressed again but again reasoned it away with the “stupid kids” line. CNN wouldn’t even bother to ask this question if the races had been reversed between the victim and perpetrators.

Again Toobin refused to take a hard stance on the hate crime question.

TOOBIN: You know, I'm going to say the three words you're never allowed to say on cable news which are "I don't know." ...I just really don't know how to characterize at this stage what the motivations here. Is racial animus, hostility? Certainly that’s a possibility and you would have to consider it.

Later on a panel with CNN commentator Peter Beinart, Republican consultant Alice Stewart, the Daily Caller’s Matt Lewis, and former Press Secretary for Bernie Sanders, Symone Sanders, they argued about how a crime like this could occur. To Lemon’s credit, he did cite the racial epithets and ask his liberal guest how this could not be considered a hate crime.

LEMON: I can’t say it’s a hate crime because Chicago police won’t say it. They’re still investigating... But when you look at this Symone, they’re saying F white people, F Trump. How can you say it's not a hate crime against a white person?

Sanders responds, saying this wasn’t a hate crime on it’s face, listing the qualifiers that make up a hate crime, not realizing that the man in the video fit two of them (race and disability):

SANDERS: First off, I just want to say this is absolutely sickening. It's unfathomable that so much hate and anger can fill up a person, where they go out and think this is okay. And then it was stupid to do it on Facebook live. That's a whole another story. But this is absolutely sickening. But I’m going to say something that probably not very popular. We cannot callously go about, classifying things as a hate crime. Motive here matters. So, was this for hate of Donald Trump, the President-elect because of the things he has said or was this pure hate of white people? That matters. Because if we start going around and anytime someone says or does something really egregious, really bad, sickening in connection to the President-elect, Donald Trump or even President Obama for that matter because of their political leanings, that's slippery territory. That is not a hate crime. Hate crimes are because of a person’s racial ethnicity, their religion, gender, disability--- not political leanings because someone doesn’t like your political leanings so they do something bad to you, that is not a hate crime.

Later on Sanders acknowledges that there is a counterpart on the left to the KKK and white supremacists, but not before she tries to legitimize those crimes because “inflammatory rhetoric” “brings out the worst in people.”

SANDERS: I[We] cannot sit here and ignore that for at least last year on very public display, the worst parts of America have been brought from the fringe into the mainstream, so that affects people on both sides. We’ve talked about white nationalists and white supremacists and the KKK but they’re also--when this inflammatory rhetoric is out there, when someone is repeatedly telling you that your community is the worst of the worst, it brings out the worst of the worst in people. So I’m not defending what they did. What these young people did was sickening. I would argue that they also need some help in addition to some consequences but this just didn't come out of thin air. Some of the nastiest and worst things have been drug into the mainstream.

Lemon actually pushed back against what Sanders said, reiterating his “stupid kids” argument, which is most likely true but doesn’t negate the fact that there is clear instance of hate and prejudice involved in the crime.

LEMON: ---Probably have no idea of the political process.  Probably have no idea who Donald Trump is. No idea really of the political process. I’m just saying that's my point of view. I don't think they really understand -- if they don't understand the ramifications of tying someone up and beating them and putting it on Facebook live, then they certainly don't understand the ramifications of a presidential election.