'This Is Why' 'You're All Going Out of Business!' Scarborough Rips Into Media for Anti-Trump Bias 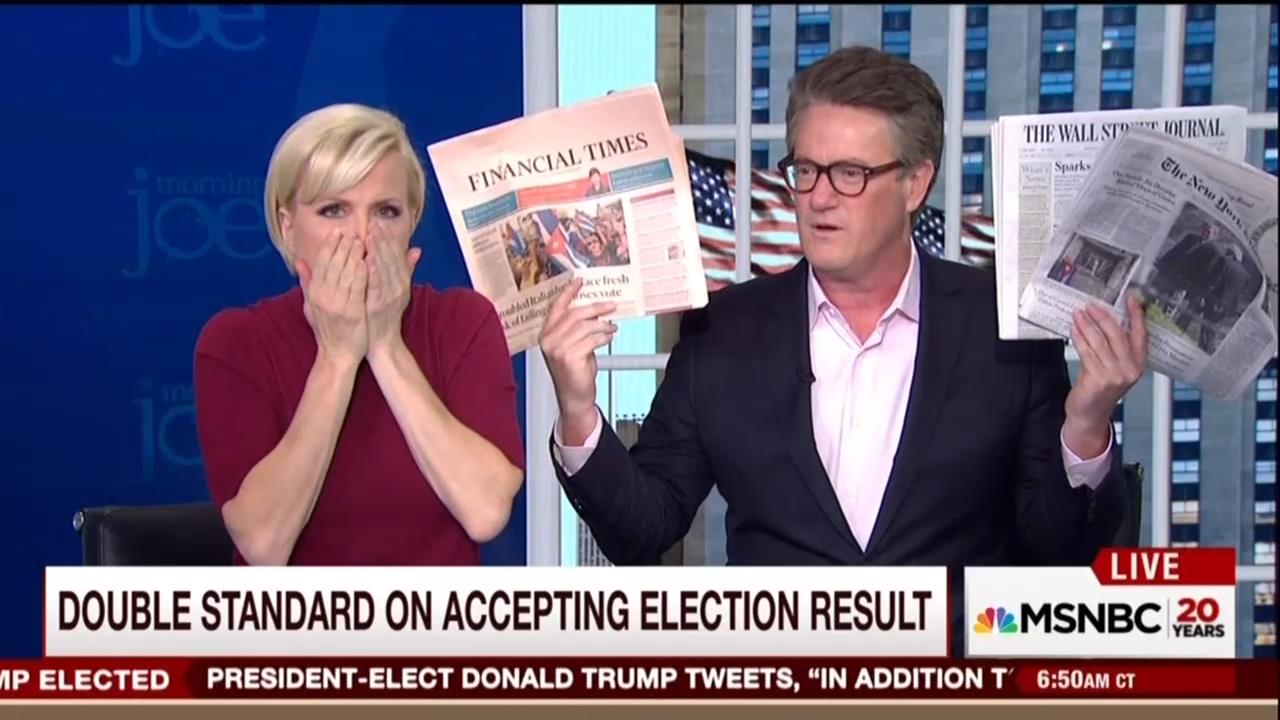 On Monday’s Morning Joe on MSNBC, Joe Scarborough unloaded on the media, calling out specific journalists and newspapers as “hypocrites” for harping on Trump to accept the results of the election before it happened, but now, giving Hillary Clinton a pass for joining in a recount effort led by the Green Party. Holding up newspapers like the New York Times, Scarborough shouted, “This why, by the way, you’re all going out of business!”

The segment began with co-host Mika Brzezinski reciting the media’s past criticism over Trump refusing to say whether or not he would accept the results of the election. She quoted the Washington Post’s Dana Milbank, who had written: “The refusal to accept this bedrock principle of democracy was shocking,” and New York Magazine’s Andrew Sullivan, who wrote, “[Trump’s] refusal to accept the results of this election disqualifies him automatically from any office in the United States.” Brzezinski also quoted Hillary Clinton, who had said Trump was “threatening our democracy,” for not automatically pre-conceding the results of the election. This last quote tickled Scarborough who found the irony hilarious.

SCARBOROUGH: [laughing] --- I’m sorry, okay hold on – [laughing]…. Hold on, that’s funny! All right, so he's threatening our democracy if he does exactly what she's doing on [sic] September 28th, which he said ‘I'm holding open my options and all legal rights to challenge anything.’ I mean they’re going to try to move this around, but you take what Donald Trump said,

BRZEZINSKI: I got a headache…

SCARBOROUGH: All he did was leave open the option to do exactly what Hillary Clinton is doing. I haven't checked -- have you checked? Is Dana Milbank today –

SCARBOROUGH:  Mark Halperin, because I know he said you were a ‘lackey for Trump’ for saying ‘Trump had a chance to win. Remember, he called you ‘a running dog lackey’ or something like that. I don't know if he was in his hunting hat when he did that, but has Dana Milbank now said ‘Hillary Clinton is threatening to undermine the democracy’ in The Washington Post today?

MARK HALPERIN: I am not sure Dana Milbank is but I don’t think he’s gotten to it yet.

SCARBOROUGH: But I am sure he will…

While Brzezinski tried to move on from Scarborough’s rant against the media, he honed in more directly at the print media. Holding up various papers, he asked, “Are any other papers saying that democracy is threatened or is this actually what people do?”

SCARBOROUGH:  But when Trump even suggested it, well, ‘Democracy is at risk’ for saying ‘I am going to keep open my options’-- This is why, by the way, you’re all going out of business!

A protesting Brzezinski tried to shush Scarborough but he continued blasting the media: