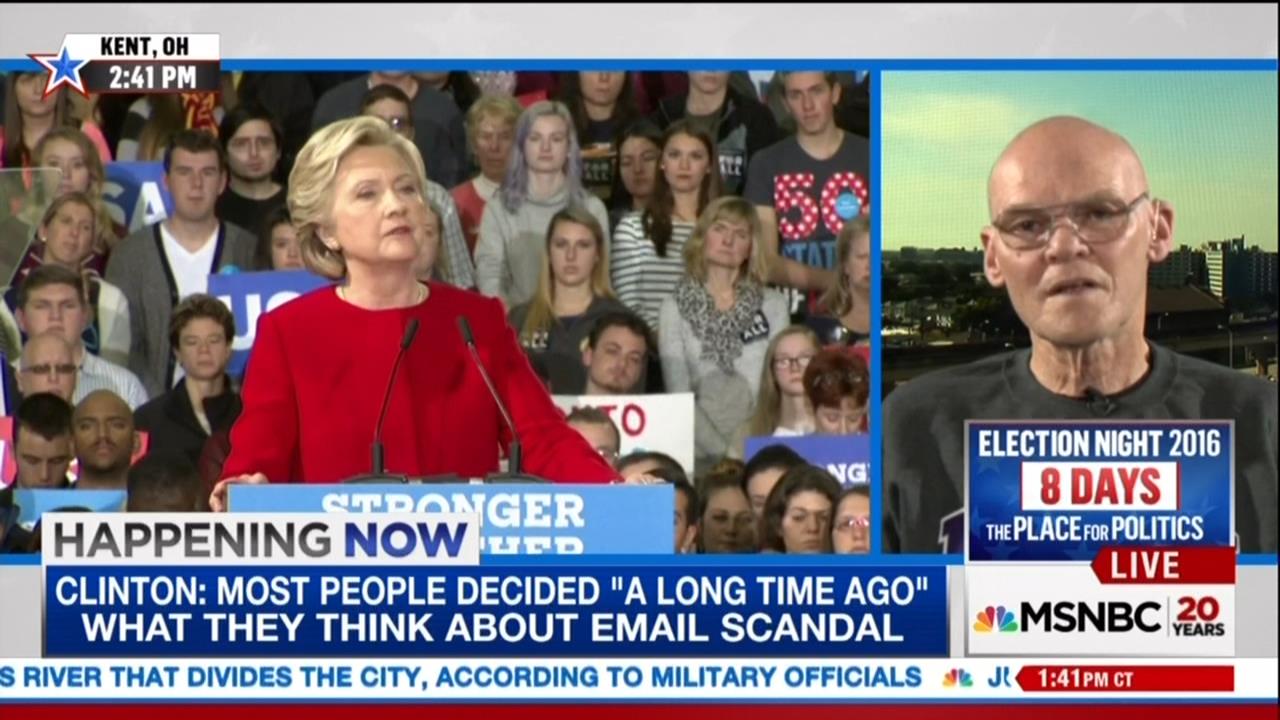 On MSNBC Live October 31, Clinton surrogate James Carville got into a heated exchange with anchor Thomas Roberts over the renewed FBI investigation into Hillary Clinton’s e-mails. Carville, a staunch Clinton supporter, became angry at Roberts for not parroting his viewpoint that Republicans were trying to influence the election. From the get-go, Carville repeatedly made ludicrous claims about the “House Republicans” working with the “KGB” to threaten the FBI, in order to rig the election.

The interview began with Roberts playing a clip of Hillary Clinton criticizing the FBI investigation, and Roberts asking Carville, “If he [Comey] had sat on information until after this election and there was something there...wouldn’t he have been accused of a coverup?”

Carville dismissed the premise of the question to begin with.

“First of all, let’s start at the beginning. He was acting in concert and coordination with the House Republicans. End of story. He gave the letter to them, they gave it to Fox News,” Carville claimed. “Also, we have the extraordinary case of the KGB being involved in this race and selectively leaking things from the Clinton campaign that they hack,” he added.

“People have to decide, do we want our country for ourselves with the people in charge or are we going to let the KGB and the House Republicans decide this election?” Carville ranted.

After Roberts pushed back on Carville’s assertions, Carville turned his attack on Roberts and the media for “defending this [FBI investigation]” and “Acting like this is something legit.” “It’s not,” Carville stated.

“Our democracy is under assault...the FBI is acting at the behest of Jason Chaffetz,” he complained. “It’s an effort to affect this election.”

Roberts then brought up how no one on the left was “up in arms” back in July when Comey recommended to the DOJ not indict Clinton. “Isn’t this a double standard?” Roberts asked Carville.

“It’s not a double standard at all. When the facts change, you change your mind. I know that’s a hard concept for people to get some time,” Carville shot back. Calling it an “assault on American democracy” again, Carville reiterated that the FBI was being strong armed by the House Republicans and the KGB. “This is an unprecedented event that was done on behalf of the house Republicans. And as we know the KGB is all over this election,” Carville fumed before attacking Roberts for not wholeheartedly taking his side.

“You’re making excuses for Comey!” he continued to rant.

Roberts appeared amused by Carville getting upset at him for simply pointing out the obvious before asking Carville to explain what he would want the FBI to do instead and wrapping up the interview.