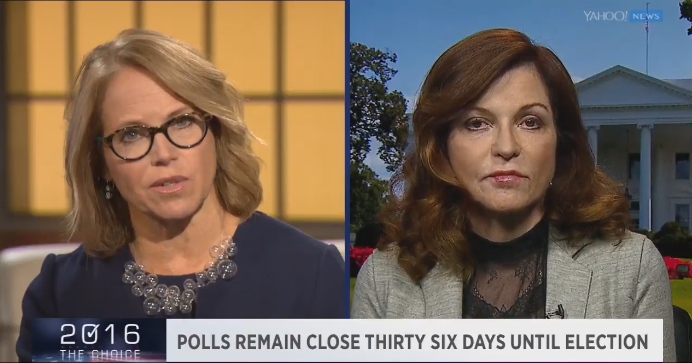 On Monday morning’s Yahoo! News, Katie Couric interviewed New York Times columnist Maureen Dowd about how Hillary Clinton’s involvement in destroying the reputations of Monica Lewinsky, Gennifer Flowers and others hurt feminism. In a surprising admission, Couric reveals that she had “a sleepless night” after reading in the New York Times that Hillary “systematically” went after the women who accused her husband of having an affair or assaulting them.

What’s funny is that it took nearly twenty years for Couric to come to this realization, despite being a part of the media spin machine for the Clintons at the time.

In the short video below, Couric asks Dowd point blank: “How involved was Hillary Clinton in the systematic destruction of the women who made these accusations against Bill Clinton?” to which Dowd responds:

DOWD: Well the Times story says it’s up for debate but I also think if you read the Times story and the Washington Post story the other day and you know, my book and other books about her it, uh, she was involved in uh, you know, and she has quotes in these stories saying that she’s not going to let these people stand in their way and um, she was involved in things like giving the private-- or giving a cent to the private investigator who, as Betsey Wright put it, “put down bimbo eruptions.” So that, you know, the private investigator would go and interview all of Gennifer Flowers’ ex-boyfriends and friends and it was a very threatening kind of atmosphere. So a lot of these women were, remember James Carville said if you pulled a dollar bill through a trailer park, they were kind of demonized on class, and then years later Bill Clinton would admit that it was true, that he had, you know, had affairs with them the same way he and Dick Morris polled--- you know he asked Dick Morris should they do a poll to see if he was telling the truth about um, I mean to see if he should tell the truth about Monica Lewinsky, would the public accept it? So there’s a very fixed pattern of Bill Clinton saying he didn’t do it, you know, Hillary and other people kind’ve trying to trash the women who said it and then years later Bill Clinton having to admit he did have the affairs.

Couric then wondered why feminists “didn’t balk” at Hillary Clinton and her team systematically “dismantling” the reputations of these women.

COURIC: I’ve just-- I’ve always wondered, why during these periods of so-called “bimbo eruptions” as you mentioned, that Betsey Wright coined that term and the take-down of these women, sort of the systematic dismantling of their reputations. Why didn’t feminists balk more?

Dowd then remarks that feminism “died” in that period because Hillary and the Clinton team had to try to deny these accusations that ended up being true, and take down these women instead of believing them.

DOWD: That’s a great question Katie but to me, feminism sort of died that period because the feminists had to come along on Bill Clinton’s retrogressive behavior with women in order to protect the progressive policies for women that Bill Clinton had as president.

So, you know, Bill Clinton made Madeleine Albright and Donna Shalala  come out and say he was telling the truth on Monica and so all of these amazing accomplished women who worked around him were kind of called to uh, support him and it's almost a class issue because they would put down these women down on class or in Monica’s case, say she was a delusional stalker, you know Sidney Blumenthal was kind of spreading that around and even on The Today Show, Hillary-- I think it was The Today Show where Hillary said, well, she was-- Bill Clinton was ministering to Monica, as though she were troubled. So, you know, I think all that stuff is problematical. I know Hillary’s campaign says that, you know, it’s old, we shouldn’t be paying any attention but I do think that feminism died a little bit when the feminists had to help Bill Clinton, you know, when Monica was actually telling the truth, as Gennifer Flowers had been, they had to support Bill Clinton just because they wanted his progressive policies on women. You shouldn’t have to have that kind of Faustian deal, where, you know, you give up principle in one thing to get good policy.