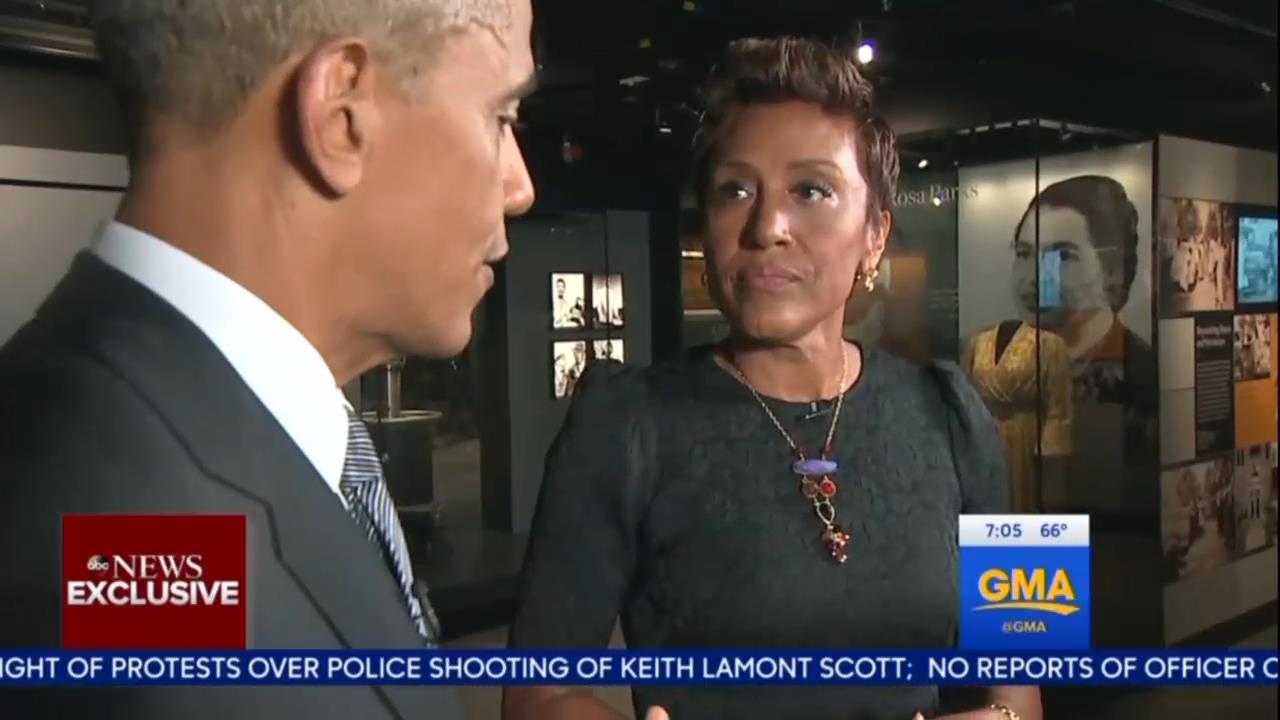 On Friday’s Good Morning America, anchor Robin Roberts interviewed President Obama and the First Lady from the new addition to the Smithsonian, the National Museum of African American History and Culture. Roberts used the museum’s theme as a starting point to ask the president what the thought about the rioters, looters and protesters in Charlotte, North Carolina. Except Roberts didn’t set it up like that. Instead, she compared the rioters to the Civil Rights Movement, and called them “Young people rising up and showing their frustration.”

From the start of the interview, Roberts brought up the “violence” and “tension” in Charlotte and asked President Obama what the thought about the recent events. She said to Obama, “What we’re seeing here is civil disobedience,” referencing the museum artifacts around them. She then compared the civil rights movement to the recent events in Charlotte:

ROBERTS:  What we have seen recently in Charlotte, North Carolina, young people rising up and showing their frustration in a different way. When you and the rest of the world sees that, what goes through your mind?

While Roberts decided to characterize rioters as “young people rising up” and described looting as “showing frustration”, President Obama actually made the distinction in his answer, between rioting, looting, and legitimate protesting, though he completely underplayed the prevalence of violence in these “protests.”

OBAMA: Well, I think it's important to separate out the pervasive sense of frustration among a lot of African-Americans about shootings of people and the sense that justice is not always color blind. What we've seen over the last several years is the overwhelming majority of people who have been concerned about police/community relations, doing it it the right way. Every once in awhile you see folks doing it the wrong way, looting, breaking glass, those things are not going to advance the cause. In Charlotte, my hope is is that in the days to come, that people in the community pull together and say, how do we do this the right way.