As it seems to be a pattern for CNN guests and pundits this week, the Dallas shootings by a man claiming to be influenced by the Black Lives Matter movement has put the liberal media through a tailspin, in their efforts to disassociate the group with the violence. From CNN’s legal analyst Sunny Hostin’s pandering on The View, to longtime contributor Marc Lamont Hill complaining on CNN’s Newsroom and New Day, CNN clearly has an agenda to set on the recent shootings and it has nothing to do with facts. 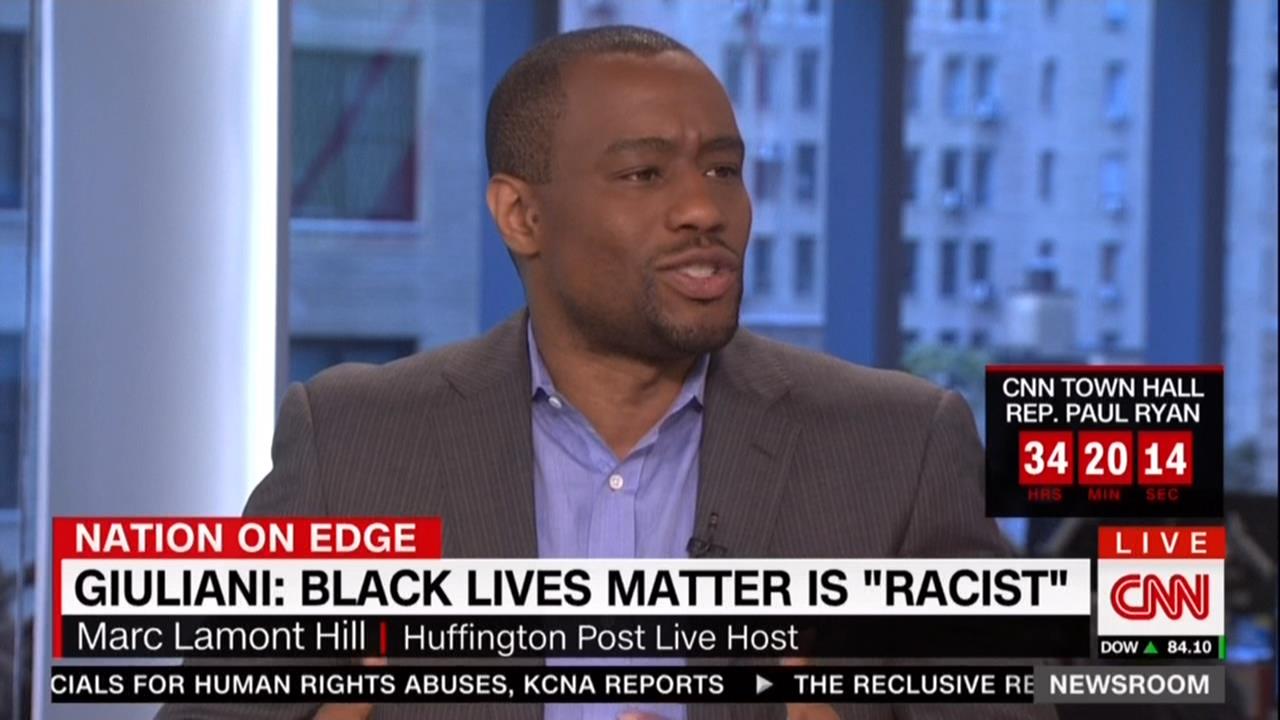 For the second time today, the Huffington Post’s Marc Lamont Hill balked at criticism of the Black Lives Matter movement. Reacting to Rudy Giuliani calling the group, “inherently racist,” Lamont Hill went off, calling the statement “bizarre” before issuing his own ridiculous statements about race:

Yes, he actually said that black people can’t be racist. That is, even after the Dallas sniper admitted that he wanted to kill as many white people, and specifically white police officers, as he could. But, no that can’t be racist!

But I digress. Lamont Hill went on to blast critics who had associated the Dallas shooter with the BLM movement, saying you can’t blame an entire group on one bad apple. He actually compared it to the Tea Party, saying, “There are racists” in the Tea Party, “But I wouldn’t say the Tea Party is racist as such.”

But here’s the kicker. He has actually called the Tea Party racist in the not-so-distant past.

In 2010, the Columbia University professor was on CNN's Saturday news program when he claimed on-air that the Tea Party as an “organization” was “racist.” So, why balk at what Giuliani said?

But he wasn’t the only one from CNN obstinately refusing to accept the facts in favor of a more appealing liberal narrative. Later, on ABC’s The View, CNN legal analyst Sunny Hostin became upset when former New York City Police Department Commissioner Ray Kelly dismantled her heavily biased leading question.Just read this exchange from Monday’s show below:

SUNNY HOSTIN: I think we need to talk about the statistics. As Joy was asking you, we know that a black kid like mine is 2 1/2 times more likely to be shot by a cop than his white friend and the bottom line here is that when you look at the statistics, white officers shoot suspects more quickly, black suspects than white suspects even in training videos. So how do you fix that? Is it training? Is it reducing the use of force? Is it shooting to wound? What is the solution because we know there is a problem.

RAY KELLY: It's a complex issue. No question about it. We know that about 70% of people who are shot by the police in the United States are white people.

SUNNY HOSTIN: But there are more white people in the United States.

RAY KELLY: That's true, however, 13% of the population is African-American. They account for about 30% of the police shootings. There is a lot more call for service for the police to go into communities of color. So it just increases the context. I think we need to look at this issue more thoroughly, drill down as far as the issue of shooting minorities is concerned. It's a complex matter. There's no easy answer to it. There is, you know, more crime in communities of color than there is in the white community. So you have to factor that in.

SUNNY HOSTIN: And why are these communities over-policed and these tactics used? That's not to say black people happen to commit more crime because that doesn't make a lot of sense, that just by the nature of their race they commit more crime. That is not necessarily true.

RAY KELLY: I would question the notion that over-policed. The vast majority that I talked about are a result of 911 calls. People in those communities calling for the police, calling for help.

Even when faced with statistics, Hostin claimed that communities were “over-policed” for reasons due to racism alone.

CNN clearly is fine with ignoring the truth in an effort to bolster their favorite race-baiting activist group of the moment.