A law meant to give students the right to protect themselves from dangerous criminals is now being called a threat to “free speech and safety” by the anti-gun rights media. Both CBS This Morning and The Washington Post hyped the fear that professors now faced on the University of Houston campus after a concealed-carry law goes into effect later this year. 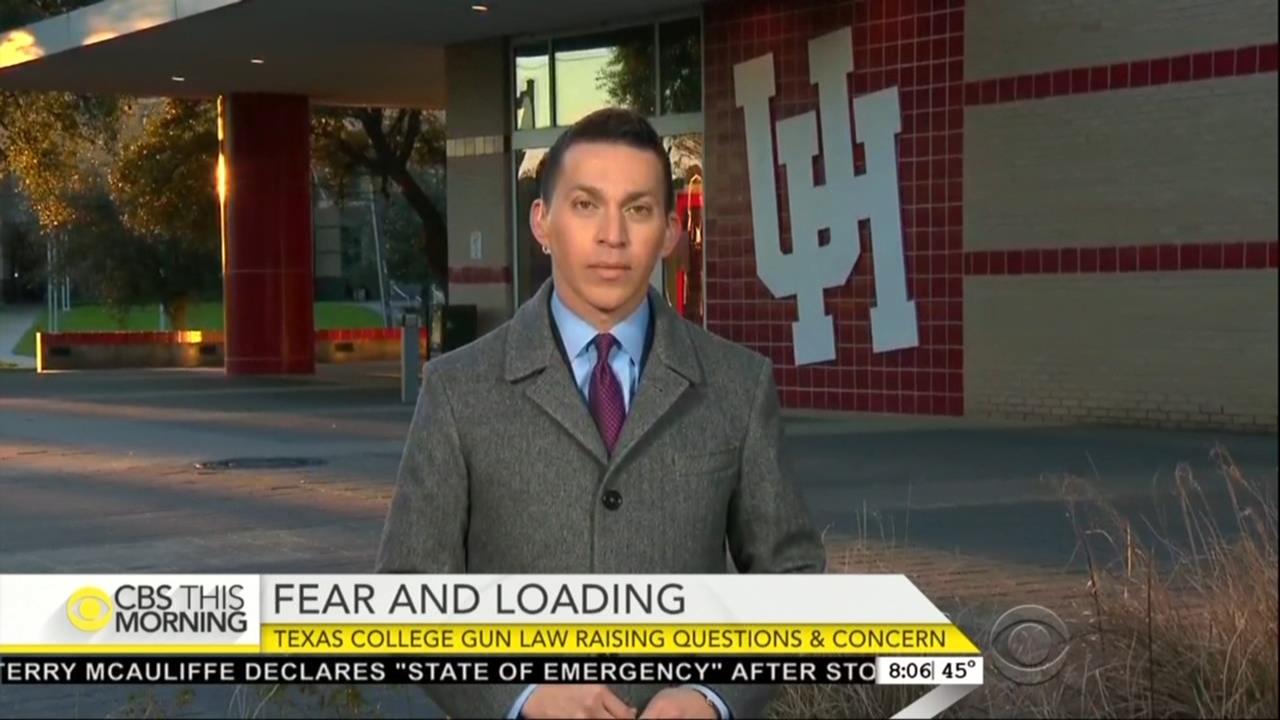 On CBS, anchor Charlie Rose warned “some faculty members are taking precaution” against the “new gun law” which professors warn “threatens free speech and safety on campus.” With that Chicken Little intro, reporter Manuel Bojorquez was on campus to play up the concerns of professors, who were now seemingly afraid of their own students.

While the text “Fear and Loading” remained across the bottom screen, Bojorquez first spoke with Professor Jonathan Snow asking hopelessly, “This is the law. It will happen. So what can you do?”

Snow responded by describing how he was teaching faculty to “absolutely not” anger students by “express[ing] their displeasure” about the new gun law. Bojorquez let viewers know more of the hyper-vigilant “suggestions” Snow made for faculty, which made students sound like ticking time bombs:

BOJORQUEZ: Among the suggestions? Be careful discussing sensitive topics and remove certain topics from the curriculum, and to “not go there” if you sense anger.

To CBS’s credit, they did interview a student who was for the law. Edwin Mascorro, who is running for Student Body President told Bojorquez, “We are students; we are not criminals.” Bojorquez then asked Mascorro if he had his concealed carry license (as if that would deem him “dangerous”?) Mascorro responded that he didn’t have it “yet” but would be applying for one. The reporter then grilled the student, asking him to defend the law in the light of professor complaints.

BOJORQUEZ: It seems like there are many professors who feel they can't have a robust debate on this topic or any other topic in their classrooms.

MASCORRO: To say that we are going to snap because we have a debate? No.

The Washington Post also played up professors’ fears in Justin Wm. Moyer’s February 25 article, “New Kind of Trigger Warning.” The Post gives a little more insight into Professor Snow, the radical professor sought out by CBS. He’s actually the president of the central campus’s faculty senate and one of the bill’s leading critics.

Moyer quoted what Snow told The Chronicle of Higher Education about the law: “It’s a terrible state of affairs. It’s an invasion of gun culture into campus life.” Snow lamented that “potentially dangerous students” were inconveniencing professors into having to “change the way” they teach.

“In a time when mass shootings are becoming commonplace,” Moyer wrote, “the controversial legislation” actually led one faculty member to quit his job and move to Sydney, Australia.

“With a huge group of students my perception is that the risk that a disgruntled student might bring a gun into the classroom and start shooting at me has substantially enhanced by the concealed-carry law,” economics professor emeritus Daniel Hamermesh wrote in a letter to the university’s president last year. “Out of self-protection, I have chosen to spend part of next Fall at the University of Sydney, where, among other things, this risk seems lower.”

While a gun rights law is portrayed as extreme and “controversial” by the media, moving to another continent to escape “scary” armed students seems just a tad more “extreme,” don't you think?