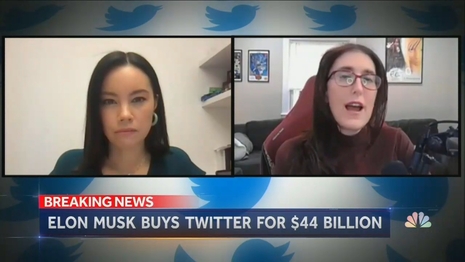 On Monday night, CBS Evening News & NBC Nightly News melted down reporting the news that Tesla CEO Elon Musk had reached a deal with Twitter to buy the social media platform with CBS wailing that Musk’s commitment to making the social media platform a safe haven for free speech will allow misinformation or disinformation to run rampant, and NBC claiming the platform will be unsafe for women & minorities.

CBS Evening News anchor Norah O’Donnell opened the show with a diva-like tantrum over Musk buying Twitter and supporting free speech on the platform: “Some are celebrating the deal. Others are concerned a hands-off approach to content will make Twitter a haven for disinformation and hate speech.”

She then decided to smear Musk personally by claiming he “used the platform to bully critics and reporters” who wrote dishonest stories about him. Much like Norah did tonight.

Picking up on O’Donnell’s slime fest, correspondent Nikki Battiste asked technology reporter Dan Patterson if there is “any danger in a Twitter owned by Elon Musk?” Patterson feared “misinformation and disinformation could be amplified considerably” and with Musk in charge of Twitter “bad actors could run rampant across the social network.”

On NBC, which was just as unhinged as CBS, correspondent Jo Ling Kent continued hyping concerns of “critics” who “are concerned that Musk's pursuit of free speech will collide with growing safety problems on Twitter, especially for women and minorities.”

Moments later, Kent aired a portion of a pre-taped interview with Brianna Wu, the Executive Director of the radical leftist “Rebellion PAC” to ask her if she trusts Elon Musk “to make Twitter better for women.”

Predictably Wu huffed that “no. I don't trust Elon Musk to make Twitter better for women at all” and then pulled out the go-to card of all leftists by whining about Musk not being willing “to go to bat for people that are underrepresented” (whatever that means).

Needless to say, if these deranged leftists are unhappy, you know Musk will make a terrific CEO of Twitter.

This media meltdown over Elon Musk buying Twitter was made possible by Allstate on CBS, and Liberty Mutual on NBC. Their information is linked so you can let them know about the biased “news” they fund.

To read the relevant transcripts of each segment click “expand”:

NORAH O’DONNELL: Tonight the world's richest man Elon Musk is set to control one of the most influential social media platforms and both lawmakers and Wall Street are waiting to see what happens next. The Tesla and SpaceX C.E.O. is worth $268 billion and now he’ll take Twitter private. The outspoken billionaire says the platform isn't living up to its potential as a place for free speech. Some are celebrating the deal. Others are concerned a hands-off approach to content will make Twitter a haven for disinformation and hate speech. Musk has used the platform to bully critics and reporters who have written articles about him or his companies. The network has nearly 400 million users. Someone not on Twitter, Donald Trump. A little over a year ago the former President was banned from the site but even with new ownership, Trump told Fox News he will not rejoin and instead stick with his own social media platform.

NIKKI BATTISTE (CBS CORRESPONDENT): Musk's own behavior on Twitter has gotten him in trouble. This 2020 tweet lead to his electric car company losing billions in value. And these 2018 tweets ran him afoul of the SEC.

Is there any danger in a Twitter-owned by Elon Musk?

DAN PATTERSON (CBS TECHNOLOGY REPORTER): Misinformation and disinformation could be amplified considerably, so the reality of an Elon Musk-owned Twitter is that a number of these bad actors could run rampant across the social network.

JO LING KENT: One of the world's most powerful billionaires striking a deal to buy Twitter for $44 billion. The influential social media platform accepted Elon Musk's offer in a unanimous vote by the board after weeks of drama. If approved by regulators, Twitter will go private and shareholders will reap a 38 percent profit on their stock as of April,1. Musk saying in a statement punctuated by emojis on Twitter, “free speech is the bedrock of a functioning democracy and Twitter is the digital town square.” But his ownership is already polarizing. Musk is infamous for his own trail of controversial and offensive tweets.

Now Musk promises to add new features, making the algorithms open source to increase trust, defeating the spambots, and authenticating all humans. Musk could also bring back users who’ve been banned including former President Donald Trump who reacted today saying I am not going on Twitter. This will be the third big job for Musk who’s currently CEO of Tesla and SpaceX.

KENT: And some critics are concerned that Musk's pursuit of free speech will collide with growing safety problems on Twitter, especially for women and minorities.

Do you trust Elon Musk to make Twitter better for women?

BRIANNA WU (EXECUTIVE DIRECTOR, REBELLION PAC): No. I don't trust Elon Musk to make Twitter better for women at all. I just absolutely don't. If you're asking yourself if this is someone who’s going to go to bat for people that are underrepresented, I just don't think that's going to be the case, unfortunately.