Does He Want A Deal? CNN Panel Whines About Manchin's Reluctance to Support BBB 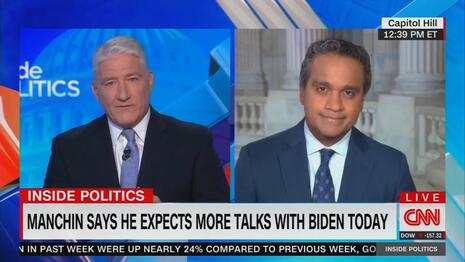 It’s panic time over at CNN. On Tuesday afternoon’s edition of Inside Politics, host John King moderated a panel of leftists to bemoan the fact that West Virginia Democratic Senator Joe Manchin reportedly has serious concerns about President Biden's massive $2 trillion Build Back Better bill., which experts have said will only pour more gasoline on America's inflation fire.

King started the obnoxious segment by whining: "we are 11 days until Christmas now and Senator Joe Manchin is still a maybe at best on the big Biden agenda package."

He first brought on CNN's chief congressional correspondent Manu Raju and allowed him to rail against Manchin's legitimate concerns over the simple fact some of the new social programs - like paid family leave or child care that are proposed in the bill - will never be repealed, despite the current promise that they're only temporary. "He doesn't want just this bill to allow for temporary programs to be extended. He wants the bill to actually include what could be the full breadth of the spending package," he said.

In response to Raju's explanation, King turned to his panel of leftists disguised as fair and balanced journalists and asked them:

"Does he want a deal? This has been on the table now for months now, months, months the big picture and then the house passed the plan. It's been back and forth. If he wanted a deal he could hand the president or Chuck Schumer, or anybody a piece of paper that says here it is, this is all I can vote for, take it or leave it, and instead, we keep doing this."

After playing a montage of Joe Manchin's other concerns in regards to the amount of government spending being pumped out, and the possible looming conflict between Russia and Ukraine which could entice the U.S. to get involved and spend even more money, John King turned and snarkily asked his panelists Jackie Kucinich, Zolan Kanno-Youngs, and Seung Min Kim: "I get inflation. Um, sure. I get the debt, sure, um, how would providing home care or more child care or taking some steps to protect the climate impact 100,000 troops on the Russian-Ukraine border? Can you help me with that one?"

To which the panel broke out into laughter like a group of elementary school students.

CNN can laugh all they want, but the fact of the matter is the laws of economics will always trump the laws of politics. If the government continues to spend more money and cause more and more dollars to chase fewer and fewer goods, the inflation crisis will only continue to spiral out of control. No amount of bullying and mocking will change the economic reality that Senator Manchin apparently is aware of.

This segment of CNN whining and complaining about Joe Manchin's reluctance to support Biden's irresponsible spending was brought to you by lucrative sponsorships from Allstate and InventHelp. Click the links to let them know about the biased news they fund.

Read the transcript below by clicking "expand:

JOHN KING: We are 11 days until Christmas now and Senator Joe Manchin is still a maybe at best on the big Biden agenda package. Majority Leader Chuck Schumer says what Democrats call the Build-Back Better bill will pass by September 25th (sic) but, it’s a pretty big but, Manchin says there's still a ton to work out. His office says there was a productive conversation, that's a quote, productive conversation Monday with President Biden. Let's bring our chief Congressional Correspondent Manu Raju into the conversation from Capitol Hill. And Manu let’s start with your effort yesterday to try to get Senator Manchin to explain what the issue is.

MANU RAJU: Yeah, he has some major concerns here, John. He doesn't want just this bill to allow for temporary programs to be extended. He wants the bill to actually include what could be the full breadth of the spending package. He doesn't believe that say the provisions in here that could be three or five years long will only last three or five years long because he argues that people, Americans once they get these benefits they will want them for more years and then congress will come back and extending it, so suggesting that the proposal could cost roughly $2 trillion is what the house plan costs is just simply not enough for him, John, so he wants to actually change it significantly parts of this bill in order to see its true cost.

KING: Ah, stay-stand by Manu, we will come back to you in a second. But so here's the question. Does he want a deal? This has been on the table now for months now, months, months the big picture and then the house passed the plan. It's been back and forth. If he wanted a deal he could hand the president or Chuck Schumer, or anybody a piece of paper that says here it is, this is all I can vote for, take it or leave it, and instead, we keep doing this.

SEUNG MIN KIM: Right. He's a man who is clearly not in a hurry to get this done which is in such a contrast to the rest of the party. Obviously, there's no forcing mechanism here to get Build Back Better done by the end of the year, there’s no government shutdown, no debt default, and Senator Manchin understanding the leverage and the influence that he has is playing to a litany of things to show that he's not yet ready to get on board and may not be by the end of this month and as every day goes by it seems less and likely that this gets done by the end of the year.

KING: To that point, to the litany, forgive me for interrupting, but to the litany point. Let’s listen, let’s listen. Depending on which day you ask Senator Manchin what's the problem, you might get a different answer.

[Cuts to a video montage of Senator Manchin]

SENATOR JOE MANCHIN: I've seen the text to a certain extent but I just haven't seen the final -- the final bill. You asked me about inflation is real. It's not transitory. It's alarming. It's going up, not down. Geopolitical fallout, we've talked about that. I'm concerned with close to 100,000 troops on the Russian-Ukraine border and also with the continuous flyovers from China taunting Taiwan. I'm concerned about paying down debt, too, so whatever we raise I want to make sure there's money going towards paying down debt.

KING: I get inflation. Um, sure. I get the debt, sure, um, how would providing home care or more child care or taking some steps to protect the climate impact 100,000 troops on the Russian-Ukraine border? Can you help me with that one?

ZOLAN KANNO-YOUNGS: That has kind of stayed consistent throughout. Right? We have both, you know, him not revealing what will get him to say yes, right?  and the things have changed is that we've had new things for Senator Manchin to point to, to continue to delay this. Right? Inflation that’s not new. What we do have that’s new is a report that came out that said these are the highest inflation numbers that we've seen in roughly 40 years, right? A CBO score, we have, that has been a topic of conversation in terms of Manchin expressing concerns about the price of this, but again, that CBO score also was talking about an extension. He would have a vote in any said extension on some of these provisions, so there's still a lack of clarity here and we'll see where he ends up getting.

KING: And to be fairer to the Senator, Manu Raju, ah look, he's from Trump's second-best state. He might run for re-election. You've been trying to poke around on that. How much does 2024 and the possibility of Manchin asking the people of West Virginia for six more years factor into what he's willing to do today?

RAJU: Well, he told me it is not a factor for him, but in talking to a lot of the folks who are dealing directly with Joe Manchin, they recognize the difficult political position he could be in if he moves ahead with this vote. Remember, this is, of course, a state that Donald Trump won by 39 points. This is a state that has trended in the Republican direction dramatically and also remember what happened in 2018. He was the lone Democrat to vote for Brett Kavanaugh and confirm him to the Supreme Court. He campaigned on that. He won by just three points. And his potential opponents are watching how he handles Build Back Better as well. One of them Alex Mooney of West Virginia told me that if Manchin does something that’s conservative, that conservative voters like, like opposing Build Back Better.

If he goes and supports it, he's going to get backlash but it's also John, not that easy because if he's the decisive vote to tank this bill, his own core supporters will revolt as well which is why all of this could play big, not just for the democratic agenda but also for Joe Manchin his own hopes. He told me I'm considering running again. He said I'm not ruling it out and I said do your voters want this bill? He said there are challenges, let me put it that way.

KING: That's a fair statement. There are challenges. Like I said 11 days to Christmas. We'll track this drama daily, daily, Manu, on the north pole there up on Capitol Hill for us keeping track.