Re: Iran Deal Opposition by GOP, Matthews Sneers 'Why Not Just Turn It Over to the Knesset Then?'

Congressional Republican opposition to the Iran deal simply boils down to kowtowing to opposing by the Israelis, MSNBC's Chris Matthews suggested during a roundtable discussion exchange with Republican strategist John Feehery on the Monday edition of Hardball. "Why don't we just turn it over to the Knesset then?" Matthews sneered, in reply to Feehery citing Israel's concerns about Iranian-sponsored terrorism. "Why have even a foreign policy in this country?"

But mere moments later, Matthews defended liberal Democratic Sen. Chuck Schumer (N.Y.), who is on record opposing the deal, by saying that of course he's "going to defend the interests of Israel and it's legitimate he do so. OK, there's nothing wrong with that. It's a fact."

"Right!" shot back Feehery, so,  "why can't our friends [on the Republican side of the aisle] do the same thing?"

Good question, Chris. Maybe it's you, not Mr. Feehery, who's "underestimating the intelligence of [Hardball] viewers."

JOHN FEEHERY:  That partisan Republican Chuck Schumer, gosh, how partisan he is. Listen, people have real problems with this agreement, and it's not just Republicans. It's also Democrats like Chuck Schumer. And you know why, because it's a bad agreement.

CHRIS MATTHEWS: What's your problem with it?

FEEHERY: It's a bad agreement. 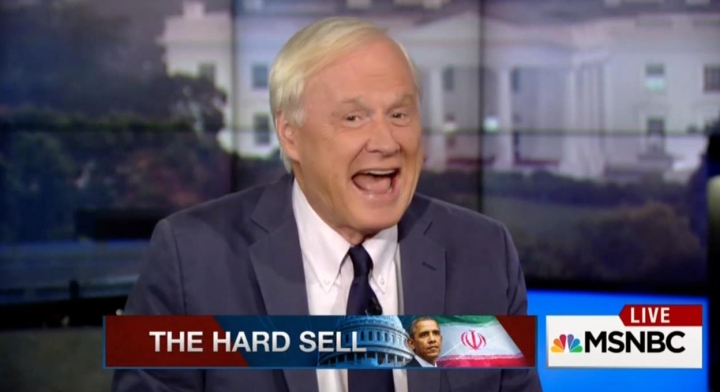 MATTHEWS: What's your problem with it?

FEEHERY: It's a bad agreement.

FEEHERY: It alienates our, it puts in danger our biggest ally in the region, which is Israel.

MATTHEWS: How's it do that?

FEEHERY: Well, it gives the Iranians all kinds of money they can fund terroristic activities.

MATTHEWS: Israel's going to sign a deal with Iran?

FEEHERY: Israel thinks that this is going to be---

MATTHEWS: What deal would Netanyahu sign? Is it conceivable?

FEEHERY: I don't know what the deal is, I know that Chuck Schumer, that partisan Republican--

MATTHEWS: No he's not, he's concerned about Israel, we know that.

MATTHEWS: You have a hard time explaining why it's a bad deal.

FEEHERY: Well, I can tell you one thing for sure, that is because the State of Israel thinks its strategic--

MATTHEWS: Your eyes are lighting up but I'm not getting an answer out of your head. Give me one particular reason what this deal, what's wrong with it. On its merits.

MATTHEWS: It ends the sanctions so they stop building nuclear weapons.

FEEHERY: Right, right, well, we're not sure about that.

FEEHERY: Well, we'll see about that. What we do know, in the short term, Israel thinks it's a really bad deal. And I think it's a bad deal.

MATTHEWS: So why don't we just turn it over to the Knesset, then? Why have even a foreign policy in this country? By your argument it's so single-minded, one issue. Of course that country's against it. Anyway, and by the way, in Israel there's a mixture of opinion.

MATTHEWS: I have no problem with Chuck Schumer. He made a decision, you know, I understand.

FEEHERY: How can that Chuck Schumer has made the right decision and the Republicans made the wrong decision when they came to the right, to the same conclusions?! You can't!

MATTHEWS: You're underestimating the intelligence of our viewers. Anyway, thank you, John Feehery. I mean, Chuck Schumer's going to defend the interests of Israel, and it's legitimate he do so.

MATTHEWS: OK? There's nothing wrong with that. It's just a fact.

FEEHERY: Why can't our president do the same thing?

MATTHEWS: OK. He has other concerns.