"The day after she rolled out her plan on climate change, Democratic front-runner Hillary Clinton said in New Hampshire that voters may have to wait until she’s president before finding out her position on the Keystone XL pipeline," Seitz-Wald noted in his opening graf, explaining that her answer flustered a New Hampshire voter who demanded a simple answer (emphasis mine):

At a town hall meeting in Nashua, New Hampshire, a man asked Clinton if she would sign a bill supporting the controversial pipeline — “yes or no, please,” he insisted. 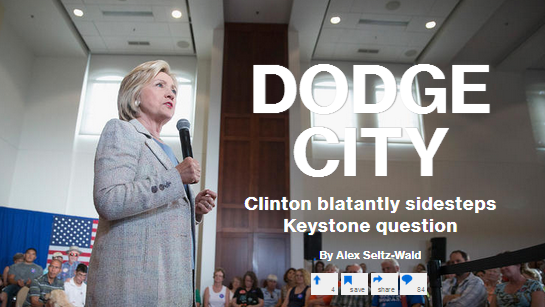 “Well,” she replied, pausing. “This is President Obama’s decision and I am not going to second guess him,” Clinton continued, saying she would wait to see what Obama does. “If it’s undecided when I become president, I will answer your question.”

As secretary of state, Clinton oversaw the approval process for the pipeline, which required clearance from her department because it crosses an international boundary. But since stepping down, Clinton has consistently refused to weigh in on the controversial project, which has become public enemy number one for climate activists.

On Monday, Clinton rolled out an ambitious climate plan. Some environmentalists, like 350.org founder Bill McKibben, said that while he admired pieces of Clinton’s plan, she was only “half the way there” because she did not take a position on Keystone and other issues.

Clinton's quip -- "If it’s undecided when I become president, I will answer your question" -- is oddly reminiscent of then-Speaker Nancy Pelosi's declaration that ObamaCare had to be passed into law in order to find out what's in it, but don't hold your breath waiting for the liberal broadcast-news media to hammer Mrs. Clinton for refusing to stake out a position on Keystone, even as here and there you will find her being criticized for it in print and online.