Today a unanimous Supreme Court, in an opinion written by Chief Justice John Roberts, ruled that police may not search the contents of an arrested individual's cell phone without first obtaining a warrant. While all three broadcast networks reported on the Riley v. California decision in their June 25 evening newscasts, only CBS's Janet Crawford directly referred to the "Obama administration" as having "argued cell phone searches were like a search of a suspect's wallet, briefcase, or coat, which don't require a warrant."

ABC's Terry Moran skirted around a reference to the Obama administration, saying simply that "the government" made the argument that searching a cell phone was akin to searching a wallet. NBC's Pete Williams likewise failed to describe the Obama administration's involvement in the case, to which it was not a party, but in which it took great interest.

Not only did the Obama administration file a friend-of-the-court brief supporting warrantless cell phone searches, Deputy Solicitor General Michael R. Dreeben got 10 minutes before the high court on April 29 to defend the U.S. government's position.

At the time, Supreme Court reporters for CBS and NBC noted, albeit in passing, the Obama administration's stance on the matter.

Earlier that morning, Williams told viewers of the Today show:

Cell phones have become a powerful tool for criminals. Widely used to arrange drug deals, and by gang members to communicate by texting. That`s why the Obama administration says police should have as much latitude to search phones without a warrant when making an arrest as they do now to examine such personal effects as purses and wallets.

In a statement emailed to reporters around 3:30 p.m. Eastern Wednesday, Sen. Ted Cruz, applauded the Court and blasted the Obama administration.

"This is the eleventh time since January 2012 that the Supreme Court has unanimously rejected the Obama Administration’s arguments for greater governmental power," noted the Texas Republican, who himself has argued cases before the nation's high court. 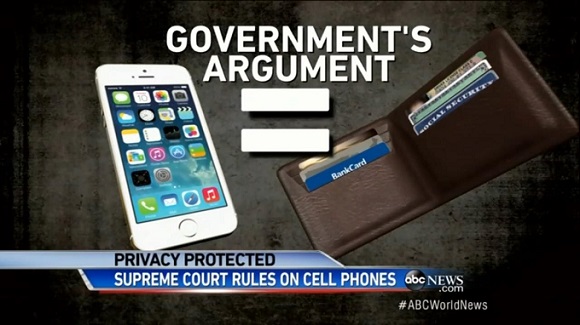