The ObamaCare health care exchange website that Maryland designed is such a monstrous failure that the state government is pulling its plug tomorrow and replacing it with a website which essentially mimics the architecture of the actually-functional Connecticut state exchange. In the process, Maryland taxpayers have seen $125.5 million of their hard-earned tax dollars flushed down the drain by 2016 president hopeful Gov. Martin O'Malley (D) and his protege, Lt. Gov. Anthony Brown, whom O'Malley tapped as his ObamaCare point man, and who is pursuing the Democratic nomination for governor this June.

Curiously neither politician was scrutinized in Jenna Johnson and Mary Pat Flaherty's March 31 Metro section front-pager "Md. to rebuild sit from scratch," and there was only a passing reference to them in an earlier story over the weekend by the same reporters.

Here's today's article (emphasis mine), where you'll notice precisely zero Republican or conservative detractors of ObamaCare quoted and where the problems with the old exchange are portrayed as inside baseball involving government contractors:

On Monday, the first enrollment period for health insurance plans made possible by the Affordable Care Act will end, so call centers in Maryland plan to stay open until midnight in a last-minute effort to boost enrollment numbers.

Then on Tuesday, Maryland will begin the process of replacing its troubled exchange, which has had so many problems since its launch on Oct. 1 that officials have decided it would be better to start anew.

Maryland had more than two years to create its first exchange, which has cost $125.5 million to build and operate, according to the exchange’s spokeswoman. The state now has about seven months to replace that system, a feat that will likely cost tens of millions of dollars. The second enrollment period opens Nov. 15.

The exchange’s board plans to vote Tuesday to use technology from Connecticut, which has had one of the most successful exchanges in the country, and hire the contractor that built that system, Deloitte, according to two people familiar with the decision. Maryland Gov. Martin O’Malley (D) and other state officials have said they will not discuss their plans until a decision is finalized.

As of Sunday afternoon, leading lawmakers had not been briefed on what is in the works. A legislative oversight committee formed earlier this year amid mounting problems with the system plans to meet Thursday afternoon to discuss the future of the exchange, said Sen. Thomas M. Middleton (D-Charles), the co-chairman.

“I am sure questions will be: What led to the decision? How much money will this cost? What’s the timeline? Are we going to be able to have an exchange up and working by November?” Middleton said. “There is a sense of relief now that we’re getting to the deadline [for open enrollment]. Now we can just focus on getting it right.”

Also on Thursday, the U.S. House Committee on Oversight and Government Reform is scheduled to hold a hearing focused on “problem-filled state exchanges.” Joshua M. Sharfstein, Maryland’s secretary for health and mental hygiene, is scheduled to testify, according to his spokeswoman.

Maryland was one of 14 states to build its own health insurance marketplace rather than use the federal one. It has been one of the worst performing in the country.

Maryland had signed up only about 9 percent of its pool of potential private plan enrollees as of March 1, according to the Henry J. Kaiser Family Foundation, which has been tracking state-by-state enrollments. By comparison, Connecticut had enrolled more than 26 percent, one of the highest rates in the country. Nationally, the rate is around 15 percent.

Maryland’s Web site crashed on its first day, and even after hundreds of fixes, the site still will not work for some users and it sometimes struggles to send enrollment information to the right places. Fighting between the state’s main contractor, Noridian Healthcare Solutions, and its main subcontractor, EngagePoint, erupted into a nasty legal battle. Maryland fired Noridian in late February.

Medicaid enrollments have exceeded expectations, which state officials say will reduce the expense of uncompensated care. Nearly 96,000 people were automatically enrolled when the state expanded its Medicaid program, and more than 124,000 additional people have enrolled.

The Medicaid enrollment success has allowed the state to meet its overall goal of getting at least 260,000 people covered. O’Malley held a news conference Friday to announce that Medicaid and private plan enrollments totaled 274,582.

News that Maryland plans to adopt technology from Connecticut was encouraging to those who have struggled with the current system.

Leni Preston, chair of the Maryland Women’s Coalition for Health Care Reform, has regularly attended exchange board meetings and said that “it’s been very clear something drastic had to happen” to fix Maryland’s system.

Connecticut’s reputation for smooth operations “gives us a warm and fuzzy feeling,” Preston said. But she added that because each state’s Medicaid process varies, adapting Connecticut’s system to meet Maryland’s needs “is something that still has to be watched.”

Peter Beilenson — the founder of Evergreen Health Co-op, a start-up insurance and health-care company that is participating in the exchange — has explored Connecticut’s Web site. He is impressed that people can shop for plans, seeing estimated prices and offerings, before having to input their personal information.

But Beilenson said that he has already asked the state to reimburse insurance carriers for expenses related to switching to a new system. He is unsure how much that will be.

So, to review, $125 million has been flushed down the drain and Maryland taxpayers will fork over millions more to get the new site up and running. And, if insurers get their way, they'll get a state taxpayer-funded bailout to pay them for costs borne by the disastrous implementation of ObamaCare.

But despite all of that, the Post simply won't make this out to be a huge political liability for those at the helm of the ship of state in Maryland.

I'd say it's unbelievable, but this is the Washington Post we're talking about. 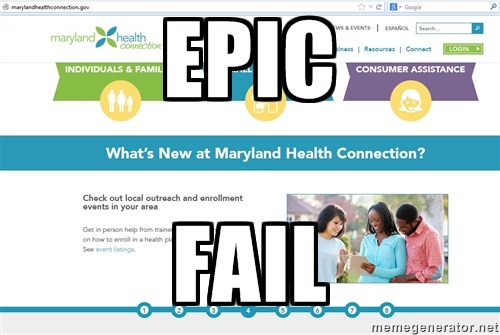