ObamaCare boosters in Colorado are treating young women "cheap sluts who don’t care about their health or well being other than getting cheap birth control pills to have sex with strange men," complains Washington Times opinion writer Emily Miller in a November 12 post at the newspaper's website.

"The latest marketing campaign implies that young women would only be interested in Colorado's government-run health care exchange if they get coverage for birth control pills to have sex with strange men," Miller noted, going on to describe what she considers the "most offensive ad" [see below page break for illustration] which...:

...shows a 20-something woman named “Susie” holding a packet of birth control pills with an open-mouth, wide smile. She is wearing a flesh-colored, low-cut, sleeveless top, tight skinny jeans and open-toed black heels.

Susie is leaning against “Nate,” who is wearing an untucked shirt with the top four buttons undone to show his hairy chest. He has a smirk on his face and one hand in the pocket of his jeans.

“OMG, he’s hot!,” Susie is shown saying. “Let’s hope he’s as easy to get as this birth control. My health insurance covers the pill, which means all I have to worry about is getting him between the covers.” 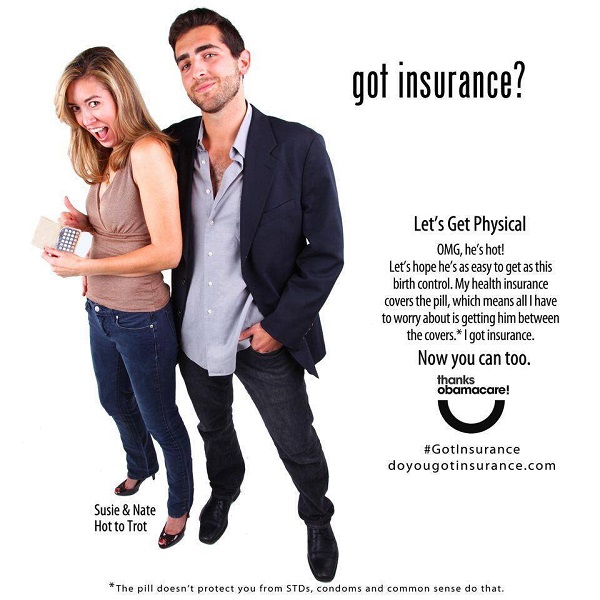 Yes, "[l]iberal groups paying for marketing campaigns to targeting young people to get health insurance is to be expected," Miller noted, but this was beyond the pale.

Miller is absolutely correct, and, when you think about it, there's tremendous hypocrisy from the Left when it comes to fighting against an imaginary "war on women."

You may recall that the media lambasted conservative talk show host Rush Limbaugh in early 2012, saying that he degraded left-wing activist Sandra Fluke by calling her a slut for testifying at a Democratic Party show-hearing about the need for "free" contraception on health insurance plans.

Liberals complained that Limbaugh was oversexualizing Fluke, reducing her to nothing more than her ovaries and dehumanizing her in the process.

Yet here we are nearly two years later and ObamaCare boosters are resorting to caricaturing women as concerned ONLY about their reproductive organs, with nary a word from liberals about how patently offensive the Colorado ad campaign is.

It really is an astounding display of liberal sexism.