While the media are busy painting Republicans -- particularly Tea Party-friendly conservatives in the House -- as the legislators who are ultimately responsible for the government shutdown, they are failing to note that "[t]he Democrats and the president have offered nothing" as a counteroffer on the continuing resolution to fund the government, NewsBusters publisher Brent Bozell noted on the October 3 edition of Hannity.

The Media Research Center founder argued that it's the same biased narrative with the liberal media as the last government shutdown in 1995, when Bill Clinton vetoed funding bills that had passed both houses of Congress. In this instance, it's a Democratic Senate refusing to sit down with a Republican House to hammer out a deal. "In the media coverage, 21 stories blaming Republicans, not one story blaming Democrats. And you know what's more interesting? You go back to 1995 and you will find the same networks, 23 times they blamed the Republicans. Not once did they blame the Democrats," Bozell noted. [listen to the MP3 audio here; watch the full "Media Mash" segment below the page break]

After viewing a montage of liberal journalists grousing that Republicans were taking the country hostage and strapping on "suicide vests" to blow up the government, Bozell reacted by noting that a CNN poll* shows that "56 [sic] percent of the American public do not want [ObamaCare]" and "therefore, 56 [sic] percent of the public was just insulted as being a right-wing fringe."

Last but certainly not least, Bozell and Hannity looked at the latest vile ooze to spew out of Martin Bashir's mouth, wherein he said Republicans cared more for war memorials to dead Americans than treating cancer for living children.

"This is not bias, this is a 100 percent bold-faced lie," Bozell insisted. "In fact, it was the Republicans who yesterday put forward a spending bill to restore funding for children with cancer" and "it was Harry Reid who said no." 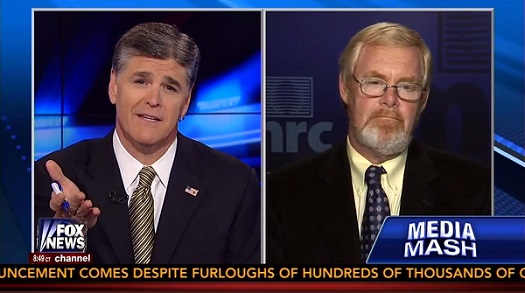