"A Hoodie. A Symbol. A Museum Piece? What will become of Trayvon Martin's sweatshirt, the latest piece of trial evidence to capture the public's fascination?" That's how the editors of the Washington Post-owned free tabloid Express grabbed the eyeballs of Washington Metrorail riders this morning.

Manuel Roig-Franzia's cover story on page 12 -- "Iconic Evidence Has Unclear Fate: Supporters view Trayvon Martin's hoodie as more than a trial artifact" -- seems to be spun off from a July 31 Post Style section front-pager, "Where's the Evidence," which looked more broadly at "iconic exhibits" of evidence in high-profile trials such as the infamous glove in the O.J. Simpson murder trial or the Bushmaster rifle used by D.C. snipers John Allen Muhammad and Lee Boyd Malvo. But the closing paragraphs of Roig-Franzia's Express piece chiefly served as a vehicle for MSNBC host the Rev. Al Sharpton to promote his designs on Trayvon's hoodie, not to mention Sharpton's insistence that Martin is the Emmett Till of the millennial generation (emphasis mine):

The hoodie could also be used in a civil lawsuit. But at some point the proceedings will end, and the sweatshirt will find its way back to Sanford, where Martin's family will be given a chance to collect it.

Martin's parents will have a choice to make. And they're certain to get plenty of advice.

"I would like to see it preserved," says the Rev. Al Sharpton, who organized the huge rally in Sanford that brought such pressure on Florida officials that the governor eventually appointed a special prosecutor to take on the case.

Sharpton is imagining what it would be like if we could see a snatch of clothing worn by Emmett Till, the 14-year-old who became a civil rights icon after he was killed for purportedly flirting with a white woman in the 1950s Mississippi. Sharpton said he considers Martin this generation's Emmett Till.

He calls Martin's death the first civil rights flash point of the 21st century. The hoodie is central to that distinction, an item of clothing that Sharpton says was used to profile Martin as a criminal.

He would like to see it go to the National Museum of African American History and Culture, which is expected to open on the Mall in 2015.The museum's director, Lonnie Bunch, has assembled other pieces with legal themes.

Martin's hoodie, Bunch said, represents a unique opportunity to further the discussion about race in America.

Curators could "ask the bigger questions" prompted by the case. "Are we in a post-racial age?" Bunch asked, thinking how the hoodie might shape perceptions. Then he answered the question: "This trial says, 'No.'" 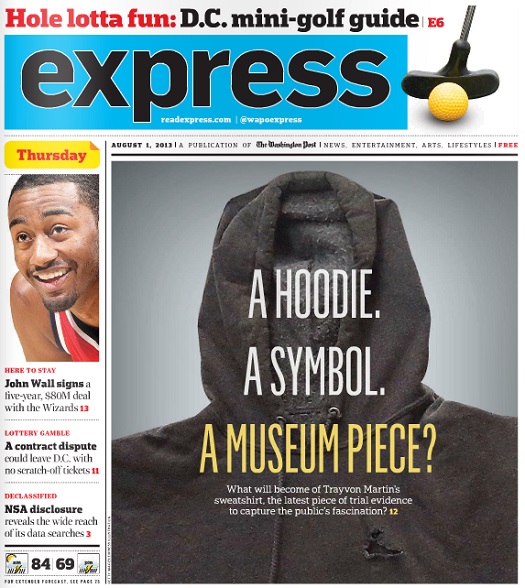 Hmm, might the museum similarly like to include both the original Zimmerman 911 call and the deceptively-edited NBC News version which left viewers with the impression that Zimmerman was a racist? Who knows?

Perhaps Roig-Franzia could ask for a follow-up story down the line.

What's more, while Roig-Franzia uncritically forwards Sharpton's claim that the hoodie was "used to profile Martin as a criminal," it's clear from the 911 transcript of the Zimmerman call that Zimmerman was more concerned with Martin's behavior which suggested he was casing houses to rob. Indeed, it was the dispatcher who prompted Zimmerman both for Martin's racial description and a description of what he was wearing. Neither were initially volunteered by Zimmerman. Here's the relevant excerpt (emphasis mine):

Zimmerman: Hey we've had some break-ins in my neighborhood, and there's a
real suspicious guy, uh, [near] Retreat View Circle, um, the best address I can
give you is 111 Retreat View Circle. This guy looks like he's up to no good, or
he's on drugs or something. It's raining and he's just walking around, looking
about.

Dispatcher: OK, and this guy is he white, black, or Hispanic?

Dispatcher: Did you see what he was wearing?

Zimmerman: Yeah. A dark hoodie, like a grey hoodie, and either jeans or
sweatpants and white tennis shoes. He's [unintelligible], he was just staring…

Zimmerman: …looking at all the houses.

Dispatcher: That's the clubhouse, do you know what the—he's near the
clubhouse right now?

Zimmerman: He's got his hand in his waistband. And he's a black male.

Dispatcher: How old would you say he looks?

Zimmerman: He's got button on his shirt, late teens.

Zimmerman's focus was on behavior he considered suspicious, especially in light of recent break-ins in his neighborhood. Of course, the liberal media's misleading narrative on the Trayvon Martin tragedy have been fossilized in amber from March and April of 2012. Roig-Franzia's story is just proof that old memes die hard, especially the Left's ability to exploit a tragedy is at stake.