While the Washington Post and Wall Street Journal this morning gave front-page coverage to yesterday's grisly beheading of a British serviceman on a London street in broad daylight, the New York Times placed their 20-paragraph story by London correspondent John F. Burns on page A7. Editors slapped on the headline, "'Barbaric' Attack in London Renews Fears of Terror Threat," with "barbaric" in scare quotes.

While the Post, Journal, and Times all ran quotes from one of the attackers as transcribed from a cell phone video filmed by a bystander, the Times curiously left out a portion of the rant where the attacker boasted, "We swear by the almighty Allah we will never stop fighting you until you leave us alone."

The Times's Burns did quote one thing the attacker said, and it was a line in which he effectively blamed the British government for pushing him to a homicidal rage: 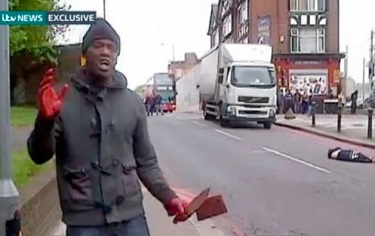 I apologize that women had to see this today, but in our lands women have to see the same thing....You people will never be safe. Remove your governments! They don't care about you.

But as Washington Post London bureau chief Anthony Faiola noted, immediately before that so-called apology, the attacker claimed inspiration from the Koran, insisting that

There are many, many ayah [verses] throughout the Koran that says we must fight them as they fight us, an eye for an eye and a tooth for a tooth.

Burns curiously left that line out of his story.

Had such a brutal attack happened in London or the U.S. and it was followed by the assailant boasting on camera, "We won't stop fighting you until we claim this country for Jesus Christ!" or that the Bible justified his violence, it's hard to believe those facts wouldn't be placed prominently in the story and maybe even quoted in the headline.