Imagine that in  a week in which George W. Bush was dogged by not one or two but three scandals -- one of which was the IRS singling out liberal groups for stricter scrutiny -- a federal appeals court invalidated a recess appointment the Republican president made, finding he improperly ran an end run around the U.S. Senate. The national media would, no doubt, pick up on the story as evidence that the president was abusing power, weaving the development into a larger narrative about the president's untrustworthiness in light of the aforementioned scandals.

Well, yesterday the Third Circuit Court of Appeals issued a ruling invalidating an Obama recess appointment that was made when the Senate was on a short break in between meetings. This is the second such ruling in four months as the D.C. Circuit Court of Appeals issued a similar ruling in late January. Predictably, however, both the May 16 broadcast network evening newscasts and the May 17 broadcast network morning shows completely ignored the ruling.

Back in January, only NBC paid attention to D.C. Circuit Court ruling, and in doing so painted the president as the victim of a renegade court. From the January 25 Nightly News (emphasis mine):

BRIAN WILLIAMS, anchor: A federal appeals court has dealt President Obama a big legal setback tonight and given Republicans, who charged that he acted improperly when he made some job appointments, a huge victory. This is about what presidents get to do when Congress is out of town. And this could affect all future presidents. 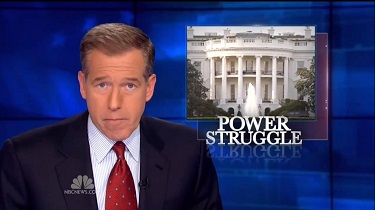 Our justice correspondent, Pete Williams, is with us from our newsroom with the details tonight.

PETE WILLIAMS, NBC NEWS JUSTICE CORRESPONDENT: Brian, if this ruling stands, it will virtually eliminate a power that presidents of both parties have used for over a century.

The Constitution gives the president power, quote, "to fill up all vacancies that may happen during the recess of the Senate." President Obama invoked that recess appointment power a year ago to fill vacancies that Senate Republicans refused to act on -- three spots on the National Labor Relations Board and Richard Cordray to run the new Consumer Financial Protection Bureau. 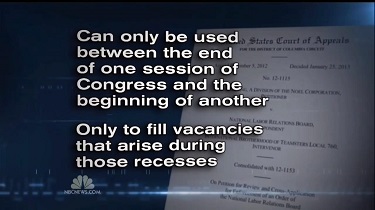 But today, a three-judge panel of the federal appeals court in Washington said that power can only be used "between the end of one session of Congress and the beginning of another, not during any congressional break." And the court said it can be used "only to fill spots that become vacant during those recesses."

Presidents of both parties have made more than 300 recess appointments. Thurgood Marshall, Earl Warren and William Brennan got on the Supreme Court that way before being confirmed. It`s how John Bolton was made U.N. ambassador, and Larry Eagleburger, secretary of state.

So the Obama administration seems certain to appeal this to the Supreme Court -- Brian?

Pete Williams from our D.C. newsroom tonight. Pete, thanks.